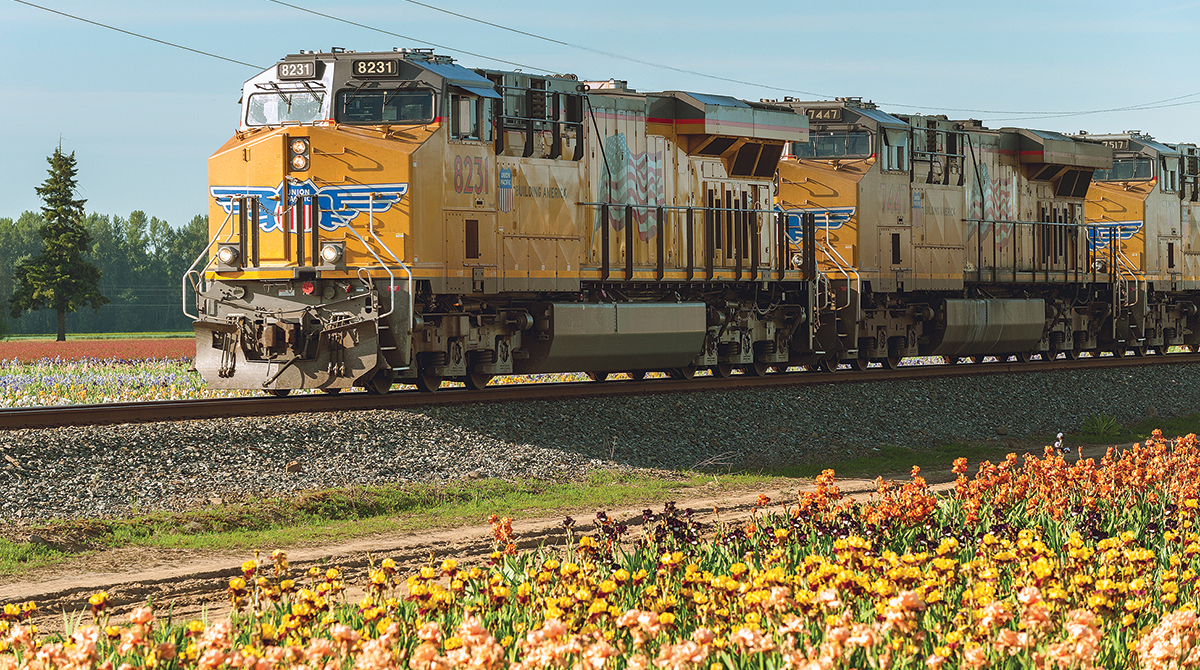 A Union Pacific train on the tracks. (Oregon Department of Transportation)

According to Zacks Consensus Estimate, Wall Street analysts had expected Union Pacific’s share price to be $2.53 with revenue of $5.51 billion.

The bridge outage that Fritz referenced was the result of June’s Northern California “Lava Fire” that destroyed a structure spanning a remote valley on the railroad’s busy Interstate 5 corridor. Once the fire was put out, Union Pacific workers and contractors were able to restore service in 30 days, in half the time it had been forecast to rebuild the bridge.

Across nine of the company’s 10 business lines the railroad showed year-over-year increases in revenue.

The only sector to show a decrease in revenue was the automotive sector where revenue fell 13% to $413 million from $481 million. Because of the worldwide shortage of computer chips and other parts a number of vehicle manufacturers have slowed or idled production plants and Union Pacific and other Class I railroads that have reported their financial results have cited this as a reason for the drop off.

Grain and grain product revenue increased 5% to $731 million from $695 million.

Food and refrigerated revenue notched up 6% to $253 million from $239 million.

Coal and renewable products significantly moved forward by 37% to $531 million from $387 million. All of the major freight railroads that have reported their quarterly results have seen an increase in coal shipments because of the concerns over an energy shortage, especially as cold weather nears in large parts of the world later in the year.

“We expect coal to remain strong for the rest of the year,” Executive Vice President for Marketing Kenny Rocker said on a conference call with reporters and analysts after earnings were announced.

Industrial products and chemicals moved up 11% to $503 million from $454 million.

Union Pacific is one of the key players at the backlogged ports of Los Angeles and Long Beach and company officials now say it is beginning 24/7 operations there to attempt to ease some of the congestion problems. Increased gate access began Oct. 17 and Union Pacific is extending operating time by about 20 hours a week to help ease cargo congestion.

The railroad previously had closed gates to trucks for 10 hours early Sunday mornings and for 10 hours on Sunday afternoons into early Monday because of low volume. Now trucks can bring maritime containers at any time to its rail yard, which is only a few miles from both ports.

“Our cooperation and work with our partners at the West Coast ports has reduced rail container dwell back to more normal levels,” Executive Vice President for Operations Eric Gehringer said. “With the Biden administration’s efforts to expand operations at the ports to ease congestion. We stand ready to move more rail containers, provided that points further along on the supply chain can handle the increased volume. We are confident we can restore service to the levels our customers expect and deserve.”