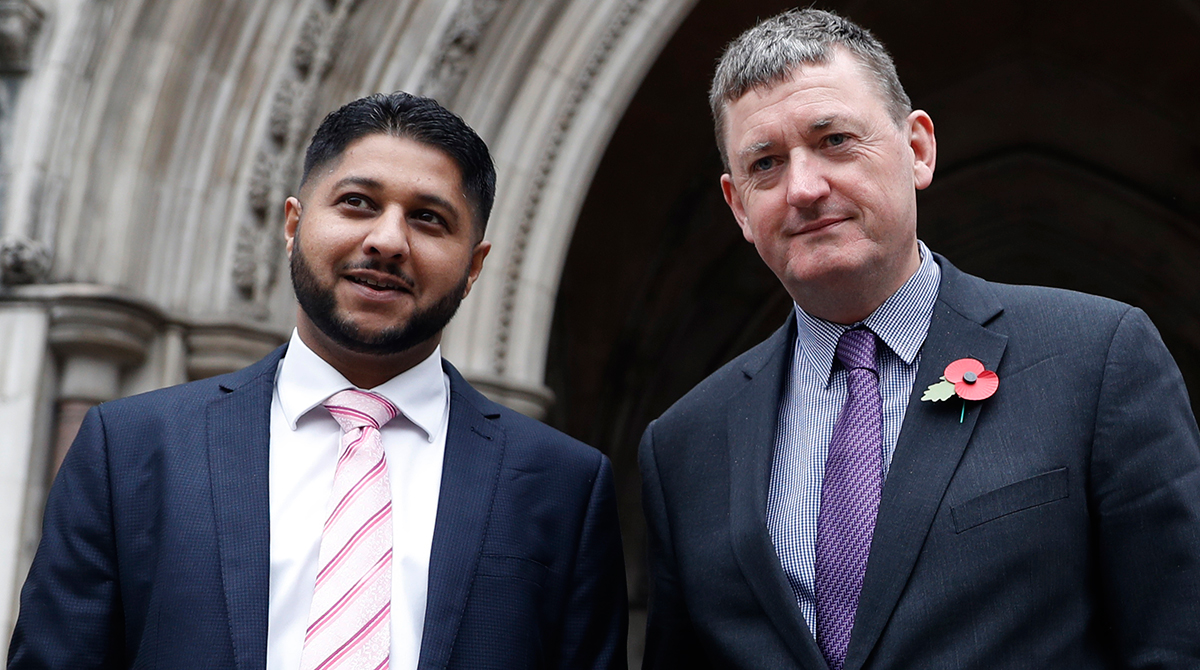 Former Uber drivers Yaseen Aslam (left) and James Farrar outside the Royal Courts of Justice in London in 2018.(Alastair Grant/AP)

LONDON — Uber is giving its U.K. drivers the minimum wage, pensions and holiday pay, after a recent court ruling that said they should be classified as workers and entitled to such benefits.

The ride-hailing giant’s announcement March 16 comes after it lost an appeal last month at the U.K. Supreme Court after a yearslong court battle. The court’s decision holds wider implications for the country’s gig economy.

Uber said it is extending the benefits immediately to its more than 70,000 drivers in the U.K. Drivers will earn at least the minimum wage, which currently stands at 8.72 pounds ($12.12), after accepting a trip request and expenses, and still will be able to earn more.

Drivers also will get holiday pay equal to about 12% of their earnings, paid every two weeks. And they’ll be enrolled in a pension plan that they and the company will pay into.

“This is an important day for drivers in the U.K.,” Jamie Heywood, Uber’s regional general manager for Northern and Eastern Europe, said in a filing to the SEC. He noted that drivers still will be able to work on a flexible basis. “Uber is just one part of a larger private-hire industry, so we hope that all other operators will join us in improving the quality of work for these important workers who are an essential part of our everyday lives.”

The drivers who filed the case welcomed the news but said it’s not enough.

Uber has “arrived to the table with this offer a day late and a dollar short, literally,” James Farrar and Yaseen Aslam of the App Drivers And Couriers Union said in a statement. They said the changes stopped short of the Supreme Court’s ruling that pay should be calculated from when drivers log on to the app until they log off. And they said the company can’t decide by itself the expense base for calculating the minimum wage, which should be based on a collective agreement.

Farrar and Aslam had taken their case to an employment tribunal, which found drivers are not independent contractors, but should be designated workers. Under British law, that means their work terms are more casual than employees but still come with benefits. Uber lost two rounds of appeals before the Supreme Court decision.

Providing more benefits for its drivers is likely to raise costs for San Francisco-based Uber, which already was struggling to make a profit and had previously run into regulatory trouble in London, where authorities had sought to revoke its license. It said, however, that it wasn’t adjusting its earnings forecast for the year.

The move in the U.K. contrasts with the outcome of a November ballot proposition in California, where voters passed an initiative exempting app-based ride-hailing and food-delivery services from classifying their drivers as employees instead of contractors.

Uber, Others Jockey for Early COVID-19 Vaccine Access for Workers