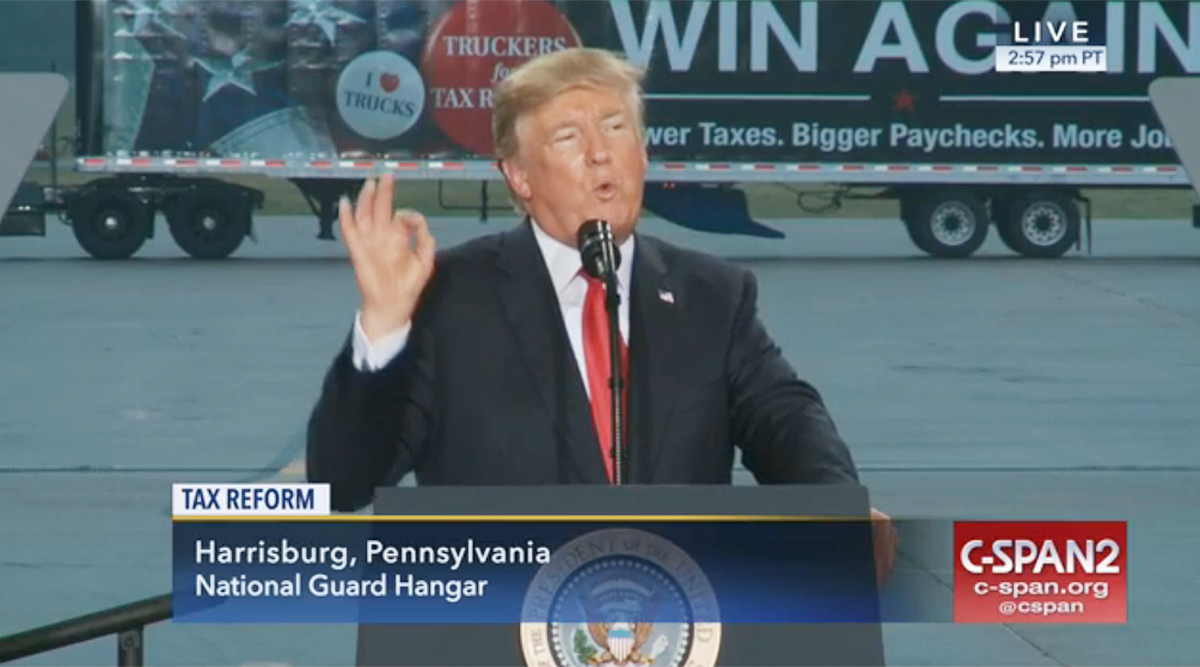 MIDDLETOWN, Pa. — President Donald Trump discussed the various benefits trucking companies will reap from his tax plan before an audience of industry executives at an Air National Guard airplane hangar outside of Harrisburg on Oct. 11.

Tax reform was one of the pillars on which Trump built his campaign. He announced his long-awaited tax plan Sept. 27. One of the chief tenets involves the abolishment of the estate tax, also known as the death tax. That tax is levied on the transfer of the estate of a deceased person.

Representatives from trucking companies, many of which are family-owned, expressed enthusiasm at the prospect of ending the estate tax.

John Summers, who along with his sister and cousin make up the third-generation owners of Summers Trucking, said he plans to pass his company to a fourth generation of family members. Summers Trucking is based in Ephrata, Pa., which is about 65 miles west of Philadelphia. The company’s fleet consists of 75 trucks and 500 trailers.

Summers said fewer taxes will provide opportunities to reinvest in training that will help rectify the industrywide shortage of truck drivers. According to the American Transportation Research Institute, the industry was short 48,000 drivers in 2015.

“We have an opportunity now like we’ve never had,” Summers said. “I need to be able to reinvest that money back into my trucks. We need to keep building.”

During his speech, Trump called out Calvin Ewell, president of H.R. Ewell, a family-owned liquid bulk carrier based in East Earl, Pa., that was founded 1946.

The company was founded by Ewell’s father, and Ewell said he plans to pass the company along to his son, Steven. The elder Ewell said abolishing the estate tax is “way overdue.”

“Abolishing the death tax is a great thing to help the family business to keep going,” Steven Ewell said. 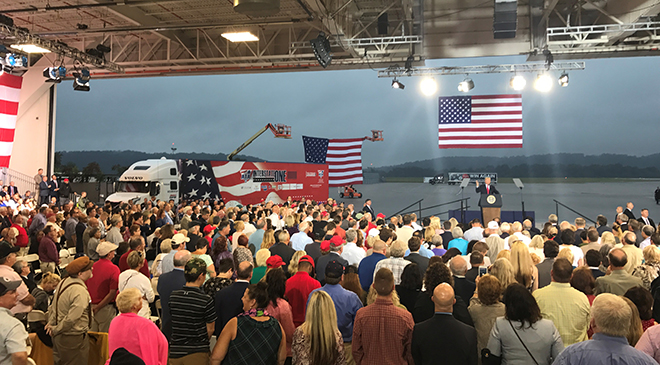 According to Trump, the plan caps the top tax rate at 25% for American manufacturers that file taxes as sole proprietors, S corporations or partnerships. Also, for the next five years, the framework allows companies to fully write off the cost of new equipment in the year they buy it. Kevin Burch, president of Jet Express and chairman of American Trucking Associations, said he plans to invest in new equipment and training for drivers and technicians.

We’re going to be working it hard on Capitol Hill to get this done.

ATA President Chris Spear, who attended the speech in support of the plan, said ATA representatives will prowl the halls of Congress to rally support for the framework. Spear said many ATA members will benefit from the “fundamental” cuts laid out in the plan. According to ATA, 97.3% of trucking companies industry-wide have 20 or fewer trucks.

“We’re the backbone. He understands what tax reform will do not only for our industry but for our country. Our job is to go and get this bill done,” Spear said. “We will carry the water on this. We’re going to be working it hard on Capitol Hill to get this done.”

Besides members of the trucking industry, representatives from the Pennsylvania Manufacturing Association, the Pennsylvania chapter of the National Federation of Independent Business, the Harrisburg Regional Chamber of Commerce and local government agencies attended the event.

Harrisburg marks the latest stop on which Trump discussed tax reform. He also spoke about the plan Sept. 29 at the National Association of Manufacturers’ annual board meeting in Washington.

Trump praised the trucking industry, stressing its importance to the American economy. The specifics of his $1 trillion infrastructure plan have yet to be revealed.

“We truly admire you. You are our heroes,” Trump said. “American trucks will glide along our highways. We will build this future together.”