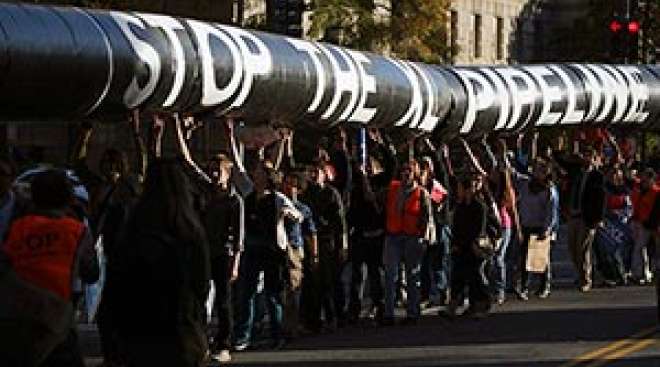 President Trump took steps to advance construction of the Keystone XL and Dakota Access oil pipelines while foreshadowing a "renegotiation" of terms and insisting that developers use U.S. steel.

Trump stopped short of green lighting construction on either project and reiterated an earlier campaign pledge to seek a "better deal" on TransCanada Corp.’s proposed Keystone XL to transport Alberta oil sands crude into the United States. On Jan. 24, Trump called that "something that’s been in dispute and subject to a renegotiation of terms by us."

The Dakota Access pipeline, too, is "subject to terms and conditions to be negotiated by us," Trump told reporters while signing measures to advance both projects in the Oval Office.

The moves, taken on Trump’s fourth full day in office, are a major departure from the Obama administration, which rejected the Keystone proposal in 2015 and has kept Dakota Access blocked since September. Environmentalists, concerned about climate change and damage to waters, land and Native-American cultural sites, now face an executive branch that’s less sympathetic to their efforts. For the oil industry, it heralds more freedom to expand infrastructure and ease transportation bottlenecks.

TransCanada had no immediate comment on the president’s actions before they were announced, and Energy Transfer didn’t immediately respond to requests for comment. About half of the project was set to be built with steel fabricated in the United States, according to a 2012 breakdown from TransCanada of an earlier version of the project. About a quarter was set to be supplied by Canada, TransCanada said at the time, with Italy and India providing the rest.

The documents signed Jan. 24 include a directive Trump said would expedite environmental reviews and approvals for "high-priority infrastructure projects."

"We intend to fix our country, our bridges our roadways," Trump said. "We can’t be in an environmental process for 15 years if a bridge is going to be falling down or if a highway is crumbling."

Jack Gerard, head of the American Petroleum Institute, said he was "pleased to see the new direction being taken by this administration to recognize the importance of our nation’s energy infrastructure by restoring the rule of law in the permitting process that’s critical to pipelines and other infrastructure projects."

Canada has not received any formal notice of action by Trump on the pipelines but still supports Keystone, a project for which Canadian approvals remain in place.

"We believe it’s a good project for Canada and the United States, and we are very hopeful" it will proceed, Canada Natural Resources Minister Jim Carr said.

The Standing Rock tribe that opposes the Dakota project said it "will take legal action to fight" Trump’s action, terming it a "politically motivated decision" that "violates the law."

“President Trump is legally required to honor our treaty rights and provide a fair and reasonable pipeline process,” said Dave Archambault II, chairman of the Standing Rock Sioux Tribe. "The existing pipeline route risks infringing on our treaty rights, contaminating our water and the water of 17 million Americans downstream.”

It wasn’t immediately clear what mechanism Trump was using to accelerate Dakota Access and Keystone XL. But his advisers have urged the new president to direct the U.S. Army Corps of Engineers to grant an easement that would allow construction of the final portion of Dakota Access, reversing the Obama administration’s conclusion that more environmental scrutiny was needed.

The advisers also had recommended the president pave the way for Keystone XL by rescinding a 49-year-old directive from former President Lyndon Johnson that assigned the State Department responsibility for determining whether proposed cross-border energy projects serve the "national interest."

Trump is asking TransCanada to submit another formal application to build the pipeline. The company’s plans for Keystone XL already have been vetted, with years of environmental scrutiny culminating in Obama’s 2015 decision that the pipeline was not in the U.S. interest.

TransCanada has not said it would reapply for permission to build the pipeline, but the day after Trump’s election, the Calgary-based company said it was looking for ways to convince the new administration of the project’s benefits to the U.S. economy. The company previously has said it remains "committed to Keystone XL."

The makeup of Keystone XL has come under scrutiny before. When the Senate considered legislation that would force approval of the project in 2015, Republicans blocked attempts to require the project to be built with domestically produced steel.

Environmentalists fiercely battled Keystone XL, making it a flashpoint in broader debates about U.S. energy policy and climate change. Landowners in the pipeline’s path have warned that a spill of dense crude could contaminate the Ogallala aquifer, a source of drinking water that stretches from Texas to South Dakota. And activists said it would promote further development of oil sands in Alberta, Canada, that generally require more energy to extract.

Dakota Access opponents say the pipeline would damage sites culturally significant to Native Americans and pose an environmental hazard where it crosses the Missouri River. Earlier this month, the Department of the Army withheld the final easement necessary for construction beneath the lake there.

Energy Transfer has argued it went through the full permitting process and has the necessary approvals. The company has said the line will be in service in the first quarter of this year, a delay from its original expectations that Dakota Access would be operational by the end of 2016.

Swift approval of Dakota Access could reinvigorate the sometimes violent protests at the site of the proposed construction.

“A powerful alliance of indigenous communities, ranchers, farmers, and climate activists stopped the Keystone pipeline the first time, and the same alliance will come together to stop Keystone again if Trump tries to raise it from the dead," said Travis Nichols, a spokesman with Greenpeace.

Josh Nelson, the deputy political director of the CREDO activist group said the action would show Trump is "in the pocket of big corporations and foreign oil interests."

"Fierce grassroots activism has stopped these pipelines over and over again,” he said. "CREDO will do everything in its power to stop the Dakota Access and Keystone XL pipelines, and keep dirty fossil fuels in the ground where they belong.”

Pipeline supporters said a final easement for the project would illustrate Trump’s commitment to building out energy infrastructure needed to ferry oil and gas around the United States. Although Keystone XL would transport oil sands crude from Canada, some space on the line is slated to be filled by supplies from North Dakota’s Bakken shale play.

Dakota Access, likewise, is aimed at giving Bakken producers a new route to energy markets, allowing them to forgo more costly rail shipments that have been a backstop when existing pipes fill up. With a capacity of about 470,000 barrels a day, Dakota Access would ship about half of current Bakken crude production and enable producers to access Midwest and Gulf Coast markets.

“What we saw today was bold and decisive action by President Trump," Terry O’Sullivan, general president of  the Laborers' International Union of North America, said in a conference call with reporters. "He said he was going to create middle-class jobs, and by what he did today, that’s exactly what he’s going to do."

Energy Transfer owns the Dakota Access project with Phillips 66 and Sunoco Logistics Partners. Marathon Petroleum Corp. and Enbridge Energy Partners announced a venture in August that also would take a minority stake in the pipeline.