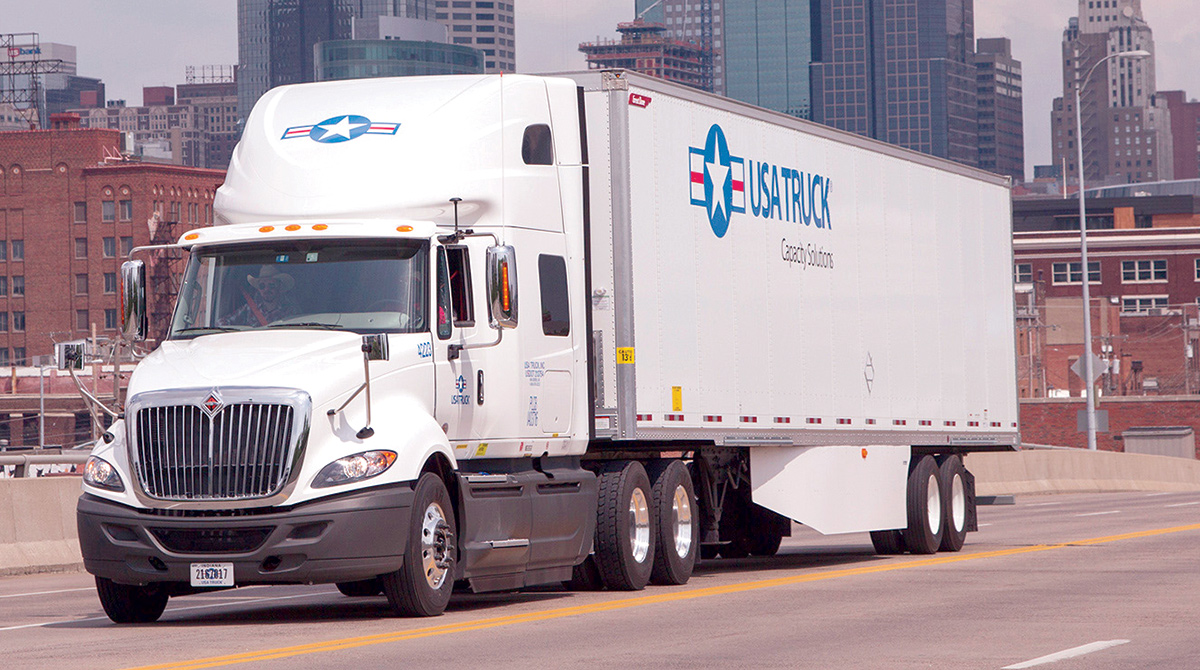 Publicly traded trucking firms have seen record-setting freight in the first half of this year but their stock prices have lagged as cautious investors pulled back from a long-running bull market and an industry that can’t find enough drivers to haul its loads.

Despite these challenges, there are some companies that look good for the rest of the year and are rising from the industry pack, according to industry analysts.

Tonnage has been growing like gangbusters, rising 8% through the first five months of 2018 compared with the same period in 2017, according to American Trucking Associations. Another indicator of this market’s muscle is the 32% rise in sales of Class 8 trucks from January through May.

But those stats aren’t reflected in the S&P Supercomposite Trucking Index, an industry-specific measure for trucking. It began the year at 461.96, rose above 500 a few times but finished the first six months of the year virtually flat at 462.12.

The broader market also was uninspiring through June with the S&P 500 Index up 2% and the Dow Jones Transportation Index down about 2%.

The issue for investors seems that the broader market has gone flat after rising nearly 60% from 2014 to the start of this year. Does that mean we’re taking a breather or starting a slide?

“There’s fear in the cycle. Trucks tend to be early cycle stocks,” said Jason Seidl, managing director for Cowen’s air freight and surface transportation group. “They are generating excellent numbers but the stocks are down, so it’s not clear where we are in the cycle but it’s safe to say we are not in early cycle.”

Seidl points to truckload leaders Daseke, Heartland Express and Knight-Swift Transportation as carriers that saw their stocks drop despite putting up good but not great first quarter results.

For carriers, the primary challenge in the first half was the driver shortage.

Seidl and Ross expect carriers as a group to do well in the second half and into 2019 as shipments are spurred by low unemployment and growing demand in the manufacturing and retail sectors. 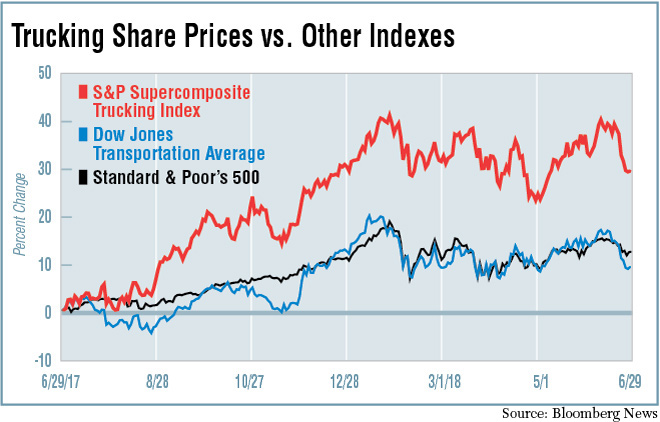 Both analysts also are watching individual stocks that could rise above the pack.

USA Truck shares have nearly tripled in the past 52 weeks to trade at more than $24. The Van Buren, Ark.-based truckload carrier improved its first-quarter results, earning net income of $1 million, or 13 cents per diluted share, compared with a loss of nearly $4.9 million, or 61 cents, a year ago, on operating revenue of $125 million, up from $102 million.

The company is focusing on its strengths, Seidl said.

“They stopped trying to be all things to all people. They reduced their bids, focused on the best lanes — their power lanes. That meant improvements in their pricing,” he said.

Ross is watching USA Truck as well but he leans to Knight-Swift because of its management and size. It calls itself the largest full truckload carrier in North America and reported net income of $70.4 million on revenue of $1.3 billion in the first quarter.

“It’s a good long-term play on the truckload sector. They’ve made internal improvements there,” Ross said. “Kevin Knight is running Swift and typically Knight is the best truckload carrier in the U.S.”

Ross also is keeping tabs on U.S. Xpress, which went public on June 14 at $16 a share, along with less-than-truckload hauler Saia Inc. following its successful move into the Northeast.

On the third-party logistics side, Tim Mulrooney of Chicago’s William Blair & Co. likes Echo Global Logistics, which has jumped more than 43% in the past 12 months. Echo generated net revenue of $339 million in 2017 and ranks No. 40 on the Transport Topics Top 50 list of the largest logistics companies in North America.

He expects XPO to continue growing organically for the rest of the year, especially in its last-mile and contract logistics business. The firm’s investment this year in its business, such as spending $90 million to upgrade its LTL fleet and $450 million on technology, demonstrates smart thinking by management, he said.

“A lot of companies are entering this marketplace with a lot of grit and a little startup capital, but few have the resources, experience and deep market knowledge that XPO has,” Mulrooney said.

All in all, it was a solid first half for the trucking industry as a few stars shone brightly, but investors turned cautious.