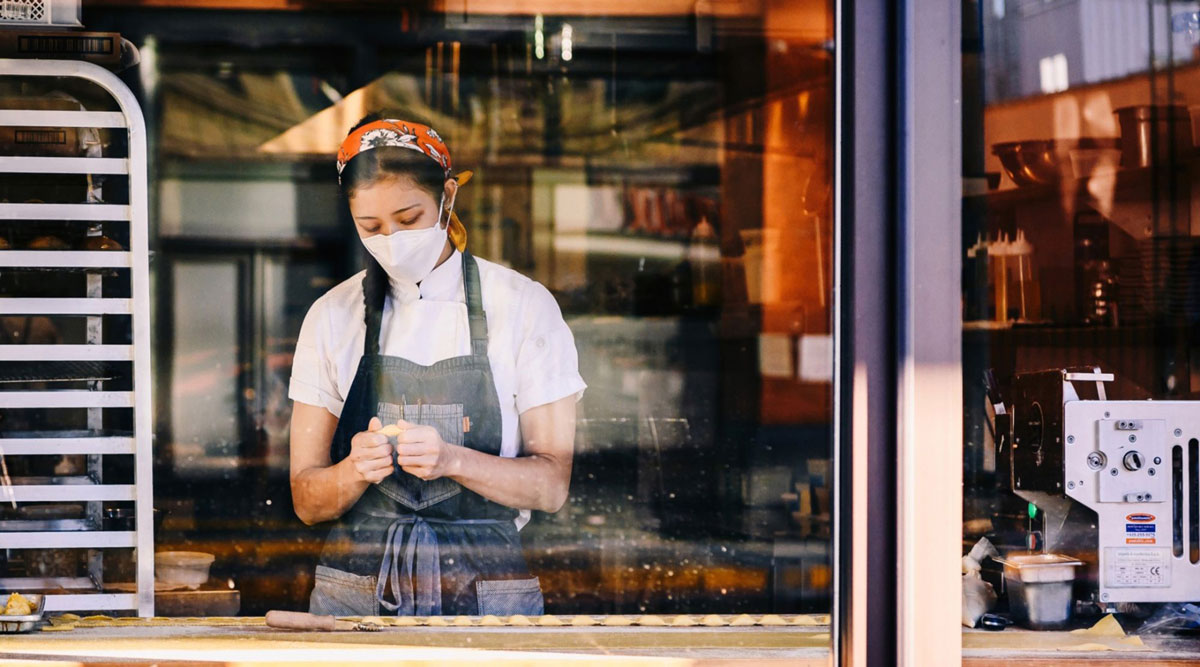 Nonfarm payrolls decreased by 140,000 from the prior month, and the unemployment rate was unchanged at 6.7%, providing the strongest evidence yet of how the surge in coronavirus cases is weighing on the economy. The median estimate in a Bloomberg survey called for a 50,000 increase in employment and for the jobless rate to tick up to 6.8%.

But there were bright spots in certain sectors. In December, transportation and warehousing jobs rose by 47,000 from the previous month, led primarily by a gain of 37,000 jobs in courier and messenger roles. Warehousing and storage added 8,000 jobs, and truck transportation added 7,000.

Tough Dec jobs report. -140,000 in payrolls, the first drop since Apr. One million more people reported than in Nov, 15.8 m total, that they were unable to work as their employer closed due to the pandemic. BUT for-hire trucking outperforms, gaining 7,300 in payrolls.

The overall weakness largely reflected job cuts at restaurants hit hard by restrictions, and that could extend into Joe Biden’s first months in office, with the president-elect already inheriting an economy that’s down almost 10 million jobs compared with before the pandemic. The data could also further raise prospects for another round of stimulus — on the heels of the $900 billion package approved in December — after Democrats’ victories in Georgia runoff elections that gave the party control of the Senate.

“The report is remarkably weak with regards to leisure and hospitality,” Jeffrey Rosenberg, a senior portfolio manager at BlackRock Inc., said on Bloomberg Television. “That’s really what’s taking the headline number down. That is very clearly about the COVID resurgence we are seeing and underscoring the need for more fiscal policy.” 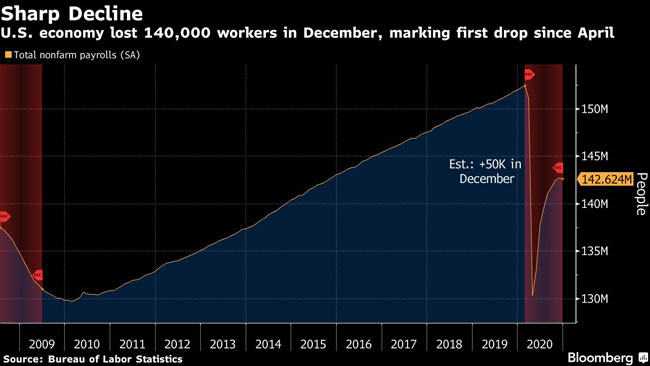 The pace of hiring will be hard-pressed to accelerate until a meaningful portion of the general population is vaccinated, with distribution in the U.S. running slower than planned and potentially holding back the recovery. A new virus strain that led to new or extended lockdowns in the U.K. and Germany has been identified in the U.S., which risks spurring more restrictions that hinder hiring in the coming months.

In December, about 1.5 million new cases were reported per week in the U.S. and COVID-related deaths hit a record pace, prompting some states to tighten business restrictions that led to a pickup in layoffs. Those getting vaccinated are essential workers or the elderly — people that either already have been working through the pandemic or are retired — which doesn’t lead to job gains in the immediate term.

Treasuries initially fell on the back of the jobs report, lifting the 10-year rate above 1.10%, before reversing and driving the yield lower on the day. The Bloomberg dollar index fell, while S&P 500 futures mostly maintained their gains for the day.

While leisure and hospitality jobs were hard hit, many sectors added jobs in December, suggesting the economic pain was relatively contained. Construction employment rose by 51,000 and manufacturing added 38,000, while retail advanced 120,500 and professional and business services increased by 161,000.

For the full year, payrolls declined by 9.37 million, the most in records dating to 1939 and exceeding the combined slump in 2008 and 2009 during the Great Recession and its aftermath.

The number of long-term unemployed — those jobless for 27 weeks or more — edged up to 3.96 million. Long spells of unemployment can make it more difficult for workers to get reemployed, earn higher wages and prevent skills atrophy.

Private-sector payrolls — which exclude government jobs — decreased 95,000 during the month after a 417,000 gain in November. State and local government jobs declined by about 51,000 last month, which also could bolster hopes for aid to such entities.