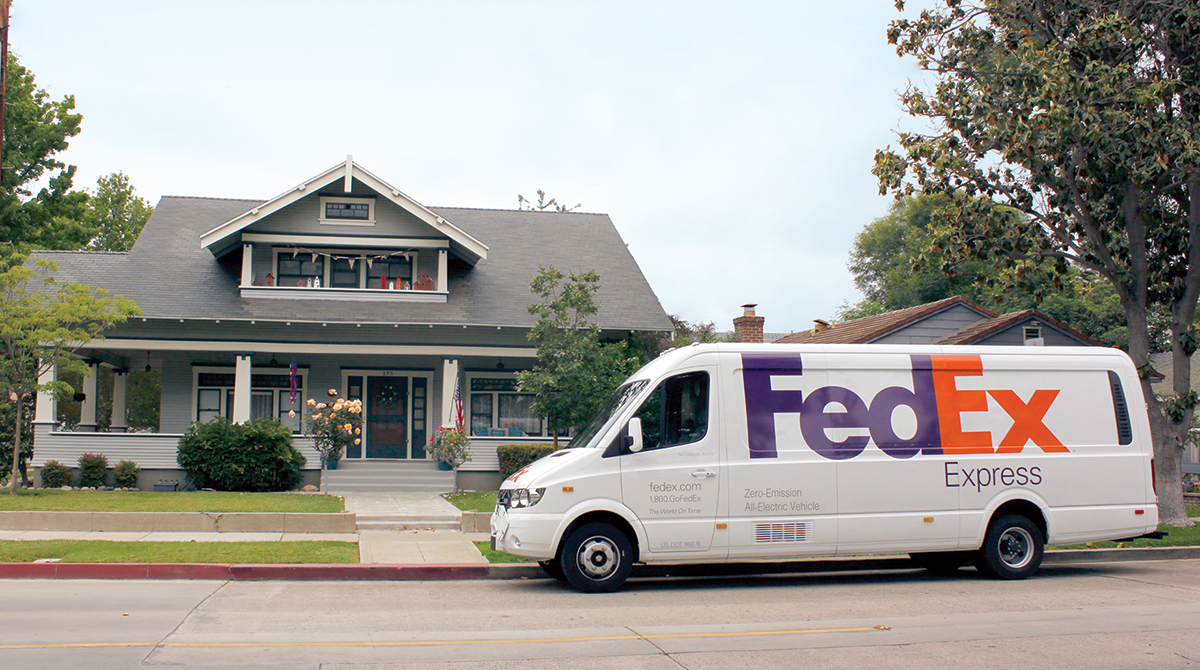 FedEx is moving to an all-electric delivery fleet by 2040, with benchmarks for EV purchases by 2025. (FedEx Corp.)

Original equipment manufacturers, shippers and environmental activist groups are aligning behind the promised benefits of zero-emission trucks, and are encouraging the trucking industry to accelerate adoption of vehicles powered by alternatives to diesel.

A March 5 report from the Environmental Defense Fund noted that while passenger cars are generating most of the sales for electric vehicles, electric trucks and buses are gaining momentum and are vital to achieving clean air goals. “Eliminating tailpipe pollution from these vehicles is also essential to help meet our nation’s climate goals,” the report said. “Our nation must adopt air pollution standards that ensure that all new sales of medium- and heavy-duty trucks and buses are zero-emission vehicles by 2040 at the latest,” the report said.

That’s the year FedEx Corp. has targeted to convert its FedEx Express delivery fleet to carbon-neutral operations, and has set benchmarks for purchasing electric vehicles beginning in 2025 to get there, with an initial investment in the plan of $2 billion. The company announced the plan on March 3, and it was met with praise from environmentalists.

“FedEx trucks pass through neighborhoods across the nation, making this announcement an important step toward better air quality and climate action,” said Gina Coplon-Newfield, director of the Sierra Club’s Clean Transportation for All campaign. “The momentum to electrify delivery trucks is on, and we urge FedEx to move as quickly as possible to get to a 100% electric fleet.”

The Environmental Defense Fund study was released the same day that 23 business groups and companies in a letter urged the California Air Resources Board to support rules that will eventually mandate electric trucks in the state. “California has already established itself as an epicenter of the clean energy economy, with nearly 540,000 clean energy workers,” the letter said. “That figure includes almost 40,000 clean vehicle jobs, which covers jobs in electric and hybrid vehicle manufacturing, repair and maintenance, wholesale trade, and professional service in California’s core EV industries.”

California has been the most aggressive state in mandating implementation of electric trucks, in phases beginning in 2024 and going through 2045. California is also included in a 15-state coalition moving to make all heavy-duty trucks electric by 2050.

Several motor carriers in the past six months have announced their intentions to add electric trucks to their fleets.

Walmart in September said it intends to electrify all of its vehicles, including longhaul trucks, by 2040, part of its stated goal of achieving zero emissions within its global operations. It has a fleet of 7,400 tractors. Walmart ranks No. 3 on the Transport Topics Top 100 private carriers list.

The Walmart Canadian division announced it was tripling its reservations of the battery-electric Tesla Semi to a total of 130 trucks, and also has committed to converting 20% of its fleet to electric power by the end of 2022. It aims to power its fleet using 100% alternative energy by 2028.

As part of its sustainability goals, Amazon.com Inc. has ordered 100,000 fully electric delivery vans from Rivian, a zero-emission vehicle manufacturer based in Plymouth, Mich. The first of these customized vehicles will begin making deliveries to customers this year, Amazon said. 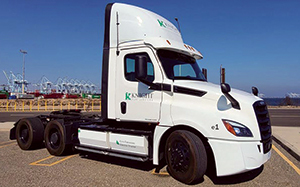 NFI Industries, Penske Truck Leasing and Dependable Highway Express all have also announced plans to deploy heavy-duty electric trucks in their operations, and an expanding list of trucking companies has joined them. Knight-Swift Transportation Holdings has deployed its first battery-electric vehicle, a Freightliner Cascadia tractor, in the Los Angeles area. In September, the truckload carrier announced that it had set a goal to cut its carbon emissions in half by 2035.

Meanwhile, Navistar and engine maker Cummins Inc. have agreed to work together to develop their own Class 8 truck powered by hydrogen fuel cells in a project partially funded by a grant from the U.S. Department of Energy.

“Today, we are testing 78 zero-emission heavy-duty trucks. They’re either on the road or being assembled right now,” Port of Los Angeles Executive Director Gene Seroka said. “What’s encouraging is that, after more than a decade of proofs-of-concept and demonstrations, we are starting to have real discussions with truck manufacturers about what it will take to make a zero-emission equipment market here in Los Angeles. Our goal is to have this equipment deployed first at the Port of Los Angeles.”