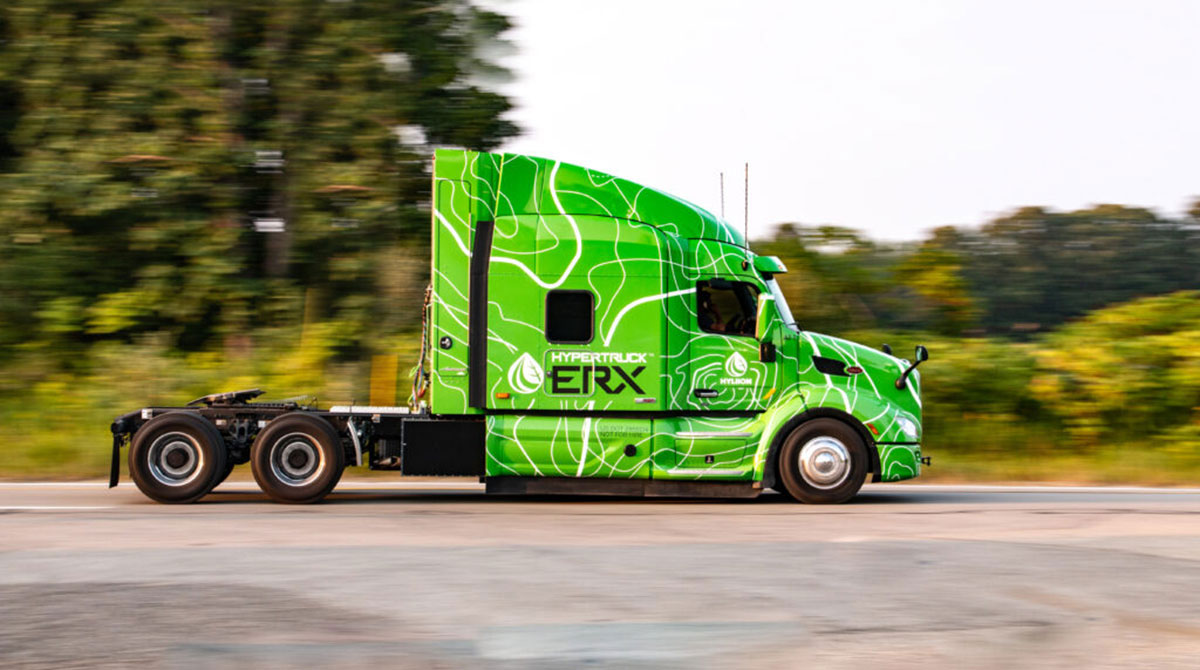 Thomas Healy of Hyliion said, “We are excited to share that our Hypertruck ERX will qualify for the $40,000 tax credit” included in the bill. (Hyliion)

Trucking stakeholders see early potential for the industry in clean-air provisions included in the Inflation Reduction Act — mostly as it relates to boosting adoption of zero-emission trucks — but success hinges on how those aspects of the law are ultimately implemented.

The bill, signed by President Joe Biden on Aug. 16, provides billions in tax credits to expand the number of zero-emission commercial trucks on the road, along with the fueling and charging infrastructure they require. While the bill’s overall value is pegged at $737 billion, the lion’s share — $369 billion — is earmarked to address climate change and energy independence.

“With the amount of money available for incentivizing medium- and heavy-duty trucks — 30% of the cost of a new truck up to $40,000, and the $100,000 for electric infrastructure — those pieces actually pull forward electrification,” Mike Roeth, executive director of the North American Council for Freight Efficiency, told Transport Topics. “I think this will definitely hurry up and get people off the sidelines, and even help scale. That’s a lot of money.” 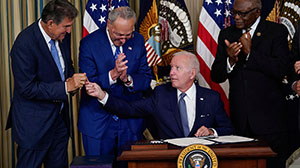 One carrier executive who’s eyeing eventual adoption of some electric trucks agreed, but said the devil is in the details.

“The legislation will certainly fast-track fleets to clean vehicles faster than before,” said Brian Matthews, vice president of operations at American Central Transport, a Liberty, Mo.-based carrier with about 300 trucks. “But, I believe, in the legislation you have to receive grants first in order to get the credits for the charging stations. So, we need to do some more research in the area and see what comes of the National Electric Vehicle Infrastructure formula program for the state of Missouri and nationally as well.” NEVI is part of the Infrastructure Investment and Jobs Act that Biden signed last year.

“We have a small fleet of day cab trucks that have the potential to be converted to heavy-duty commercial EVs before our over-the-road fleet,” Matthews added.

Truck makers see the legislation as a next step to advance efforts they already have underway.

Daimler Truck North America, the leader in Classes 6-8 U.S. retail sales according to Wards Intelligence, called IRA an “unprecedented investment” in clean energy and domestic clean energy industries. The company holds the long-term ambition to transition all of its new vehicle sales to exclusively carbon-neutral (in driving operation) by 2039.

Magnus Koeck, vice president of strategy at Volvo Trucks North America, said, “We’ve seen since our customer launch of the VNR Electric that areas with incentives have had higher adoption rates.”

David Galbraith, vice president of global brand and marketing at Mack Trucks, said IRA’s incentives will “help us achieve our goal of 35% of our sales to be zero-emission vehicles by 2030.”

VTNA and Mack are brands of Volvo Group.

Partners for a ZEV Future, a new advocacy group, noted IRA includes, among other provisions:

Cummins Inc. CEO Jennifer Rumsey said the company sees IRA as an opportunity to increase U.S. manufacturing capacity and grow jobs “in all of these different technologies that support our strategy — Destination Zero — to decarbonize our industry.” She made the comment at a White House roundtable discussion in August, before the bill was approved.

Climate change is a significant challenge that will take all of us, working together, to address. That's why @Cummins and dozens of other leading businesses and environmental organizations are advocating for the Inflation Reduction Act.

Cummins noted IRA included incentives for development of low- and no-carbon technologies, including battery and fuel cell electric, as well as low- and no-carbon fuels like hydrogen that could be used with those technologies. Hydrogen can also fuel traditional platforms, such as internal combustion engines, to reduce carbon.

Zero-emissions truck maker Nikola Corp. in a statement said IRA touches nearly every aspect of its business model. It noted the bill’s hydrogen production tax credit of up to $3 per kilogram is significant because “it instantly provides a drastic reduction of one of the most costly components of total cost of ownership, hydrogen fuel (for fuel cells).”

Thomas Healy, founder and CEO of Hyliion Inc., said, “We are excited to share that our Hypertruck ERX (extended range electric powertrain) will qualify for the $40,000 tax credit” included in the bill. Hyliion noted incentivizing a tech-neutral approach to decarbonization allows for a larger playing field that supports the emergence of new, innovative ideas to tackle a serious problem.

Roeth at NACFE added, “With respect to alternatives like natural gas, hybridization or renewable diesel (available now), IRA also makes those benefits and consequences clearer, so that there is less confusion in this messy middle (packed with existing and emerging alternatives to traditional diesel).”