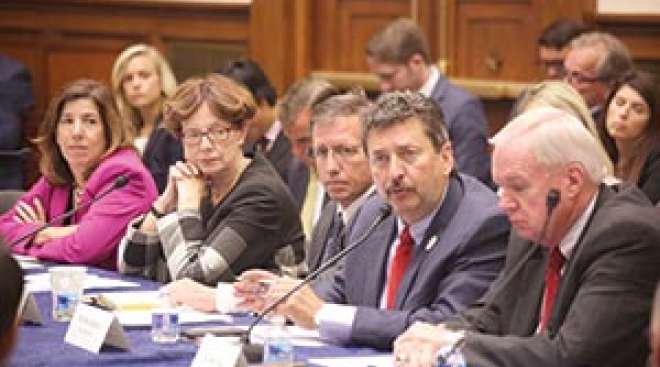 This story appears in the Sept. 26 print edition of Transport Topics.

Truckers and other transportation stakeholders last week voiced a variety of regulatory, infrastructure and funding concerns to the House Highways and Transit Subcommittee.

Although the two-hour roundtable Sept. 22 was designed to center mostly on the effects of the FAST Act’s freight provisions, much of the discussion turned to long-standing industry concerns ranging from the hours-of-service restart provision to a shortage of truck parking and congestion.

Although the panel members said they were pleased that Congress finally passed a five-year highway bill, some expressed concerns about future transportation funding.

It also approved $6.2 billion over five years to fund freight improvements and $4.5 billion for competitive highway project grants for states.

“Ensuring dedicated funding for highway freight projects was an important victory for ATA and the trucking industry in the FAST Act,” Burch said. “Having good, uncongested highways is important to my company and to trucking companies across the country.”

But Burch told subcommittee members that about 88% of the nation’s congestion occurs on only 18% of the interstates and that funding should be directed at the worst bottlenecks.

In a series of questions posed by subcommittee members, Burch said ATA supports a requirement for trucks to install electronic logging devices, but he conceded that with congestion delays and a truck parking shortage, some drivers will be challenged to plan ahead to find parking before using up their 11 hours of driving time.

Burch, Payne and Bowman agreed that the HOS restart provision would harm the industry’s productivity without making the nation’s highways safer.

Amazon’s Payne said such state regulations as the California meal and rest break requirement for drivers are problematic for his company. “We operate a nationwide network of trucks that move across the country over state lines,” Payne said. “It’s a challenge to manage drivers across state lines with different rules and regulations.”

He said allowing the use of twin 33-foot trailers would make the highways safer and less congested by taking an estimated 6.6 million truck trips off the road.

Although Richards said a grant to PennDOT will fund badly needed Interstate 95 projects, she noted that the application process is too labor intensive. “The competitive bidding process for us has been difficult,” she said.

Rep. Janice Hahn (D-Calif.) criticized the FASTLANE grants program for failing during its first round to fund projects for the Port of Los Angeles and Long Beach complex, the nation’s largest and among the most congested seaports.

Rep. Thomas Massie (R-Ky.) expressed concerns over the sustainability of transportation funding and asked panel members if they had opinions on how to pay for the highway bill.

“I think we sort of papered over something in the highway bill,” Massie said. “I don’t think we answered how we pay for it long term.”