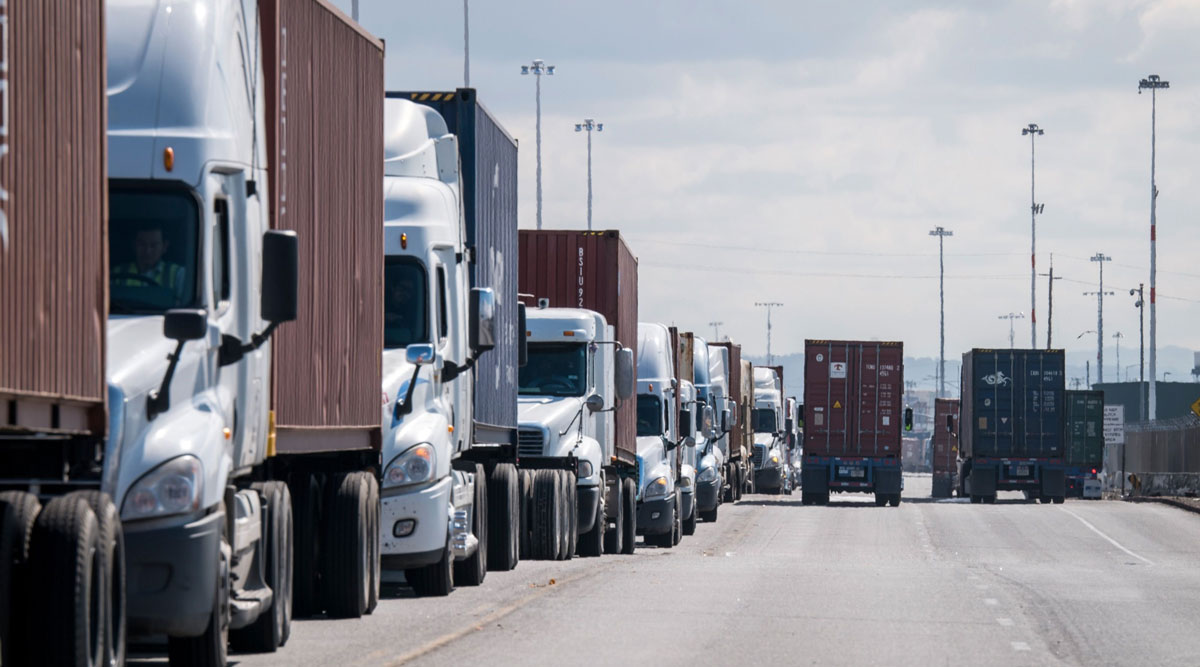 U.S. trucking companies are riding a surge in cargo demand from consumers stockpiling basic goods, but it may not last long.

Shipping has picked up pace as the rest of the country shuts down to help control the spread of the coronavirus. Trucks are rolling down traffic-free highways and arriving at distributions centers where workers unload pallets and packages in an eerily empty landscape of closed-down schools, office buildings and malls.

But rampant buying will subside as pantries and cupboards overflow, and demand for other products, such as furniture, luxury items and auto parts will stagnate as people hunker down in their homes, American Trucking Associations Chief Economist Bob Costello said.

“Freight is really strong, and it’s because of all this surge in activity around replenishing grocery stores, retailers and pharmacies,” Costello said. “I think April is going to be soft. I mean, very soft.”

The trucking industry is a key player in the movement of physical goods that keep the economy humming. How freight holds up as China ramps up exports and the U.S. begins to shuts down its cities to break the contagion may provide early clues to how severe the pandemic’s economic damage will be.

Heavy purchases of food, medicine and key consumer materials such as toilet paper and bottled water are keeping truckers extra busy for now, and demand for other goods has yet to taper off as people hunker down in their homes, Costello said. But he expects demand to drop sharply in April and May.

Nonetheless, rates have been rising because of the heavy demand spurred by the new coronavirus — a welcome respite after a yearlong freight slump.

Trucking rates on the spot market for dry goods jumped about 16% for the week ending March 20 compared with a year earlier, the largest weekly gain in more than 12 months. Rates for refrigerated truck freight climbed about 15%, according to a KeyBanc Capital Markets report March 23. Spot rates for all of last year fell 20% from 2018.

Low fuel costs also are giving truckers a boost after oil plunged last week to the lowest level since 2002.

March’s activity boom looks on par with the peak December holiday season for some shippers, said Jeff Kauffman, a transportation analyst at Loop Capital. He thinks the strong demand in basic goods will continue as people forgo restaurants and shopping at retail centers to eat at home and order items online.

“What you’re seeing is a shift in the consumer wallet,” he said. “That portion of what a consumer spends is elevated, and it’s going to remain elevated.” 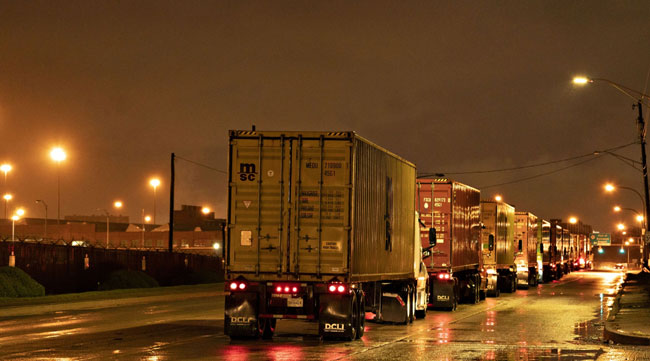 Trucks wait to enter the Port of Baltimore on March 23. (Andrew Harrer/Bloomberg News)

With a strong March finish for freight, the fallout from coronavirus won’t show up much, if at all, in first-quarter earnings reports, Kaufman said. He expects that to change dramatically as government-mandated shutdowns of nonessential businesses cause the economy to tank.

“Clearly, second quarter is going to be scary,” Kauffman said. “The question is how fast do we bounce back as we finish the second quarter.”

A second wave of freight demand is coming from China as most factories there already have restarted production and will be sending supplies to the U.S. That cargo could take several weeks to reach U.S. ports as shipping companies just now are returning empty containers to China, and Chinese ports are resolving issues of driver shortages and congestion.

And it’s unclear how much longer-term consumer spending will be hurt as people shelter in place, companies begin laying off workers and small businesses suffer from a sudden dearth of sales. Much will depend on a spending package being hashed out in Congress and the effectiveness of U.S. Federal Reserve moves to prop up the financial system.

“There will be a reduction in demand from the heavy-goods industries for a period of time, and the period of time is the big question mark for everyone,” said Frank McGuigan, CEO of Transplace Inc., which helps companies manage their shipping operations. “If you’re selling living room furniture sets or cars, I just don’t see a lot of people consuming that type of stuff right now until people have a better view of when we’re going to come out of this.”

The trucking market already had reached a bottom at midyear in 2019 after a 25% drop in freight rates, and was poised for a slow recovery coming into this year, said Chris Pickett, chief strategy officer for Coyote Logistics, a freight broker unit of UPS Inc. A lot of smaller trucking companies went bust and larger truckers scaled back during the freight recession, taking excess capacity out of the market.

Along with the surge of freight in March, rates have been pumped up because regular contract cargo has been disrupted and the market is being driven by spur-of-the moment freight shipments that are settled in the spot market, Pickett said. Spot rates are used by companies to price longer-term freight contracts, which usually are renewed for a year. 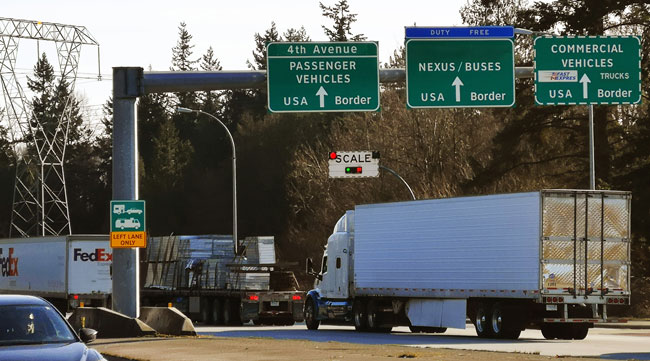 Trucks line up at the Pacific Highway Border Crossing on March 17, as they wait to enter the U.S. (Adrian Brown/Sipa USA via TCA)

As the U.S. economy slides into recession, there could be another shakeout of trucking companies that don’t have time to fully recover from last year’s freight downturn. One eventual bright spot will be diminished inventories, which had been stubbornly high for more than a year, dragging on freight demand.

“We’re going to have radically depleted inventories across a broad swath of industries that, for the first time in a number of years, will have to be replenished aggressively when we get to the other side of this,” Pickett said.

In the meantime, trucks still are rolling and there’s “zero indication” of problems with supply chains, ATA’s Costello said. Services that drivers depend on — truck stops and state-run rest areas — continue to operate. The importance of trucking is more evident than ever in this time of crisis and drivers are responding, he said.

“They’re feeling very patriotic,” Costello said. “They’re all out there doing this work that we need them to do, and they’re doing it well.”