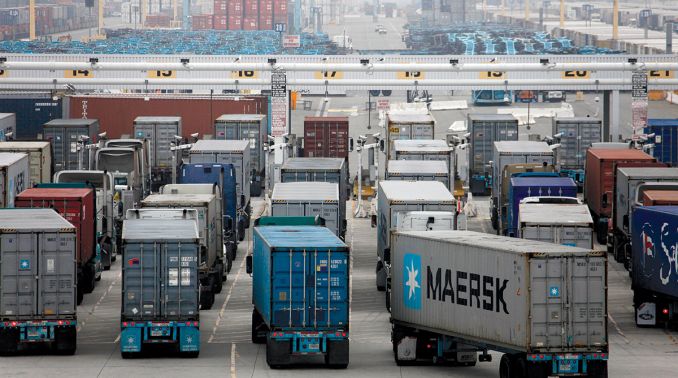 Trucks wait to be loaded at the Port of Los Angeles. (Nick Ut/Associated Press)

Improved efficiency, better communication and slower growth are three of the reasons truck turn times at the ports of Los Angeles and Long Beach in November fell to their second-lowest level since March 2014, the Harbor Trucking Association announced.

“The relationship between the marine terminals and the truckers in Southern California is probably the best it has ever been,” HTA CEO Weston LaBar told Transport Topics. The group monitors monthly turn times at the facilities, the two largest on the West Coast. Turn time is the average time it takes a truck to enter and exit a port facility.

The improvements last month are part of efforts over the past 18 months to improve collaboration at the ports, added Alex Cherin, the executive director of the California Trucking Association’s Intermodal Conference. 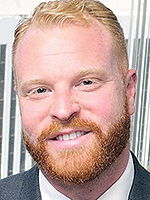 “There’s a lot better dialogue between the terminal operators and the drayage companies, where historically both sides didn’t talk about operational issues,” he told TT. “You’ve seen a much better dialogue in months, years to understand the operational constraints they’re dealing with. I think there are a lot less trouble tickets being generated because there is a lot better communication.”

Cherin added, “Turn times started to improve even before we saw a dip in the volume.”

The November average turn time of 69 minutes is a 23% improvement over last year’s 90-minute figure, and closely follows October’s turn time of 68 minutes, which was also down from 90 minutes a year ago. HTA contracts with Geostamp to aggregate turn time data monthly using GPS and geofencing, measuring the minutes from when a trucker enters the queue outside the terminal to crossing the exit gate.

LaBar and Cherin agreed that another factor improving turn times was upgrades to the appointment system at both facilities, which gives shippers more time to prepare their schedules and bring in additional workers to load and unload trucks depending on volume.

The percentage of moves that took more than two hours declined from 24% last November to 11% this past month. Of the 12 operational terminals at the two ports, four of the 12 had turn times of 60 minutes or less, and another seven had turn times between 60 and 90 minutes.

The Fenix Marine Terminal at the Port of Los Angeles had the longest turn time at 92 minutes, which was two minutes slower than a year ago. But it’s a substantial improvement from the 140-minute times it had as recently as March.

The Long Beach Container Terminal E recorded the best time overall for the two facilities at 35 minutes. That terminal has had some of the shortest turn times for both ports since March, averaging 35 minutes over the past nine months.

Declining volume also contributed to the overall turn time improvements, due in part to the United States’ ongoing trade war with China. The Port of Los Angeles saw container volume fall by 19.1% in October to 770,188 twenty-foot-equivalent containers, or TEUs, from 952,553 in 2018. 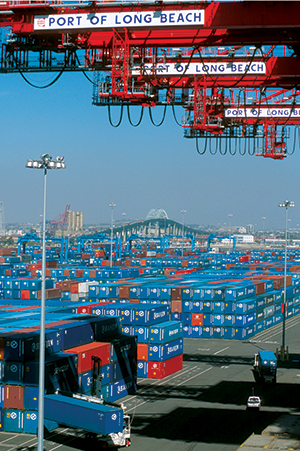 In 2018, 73% of the cargo processed at the Port of Los Angeles, worth $153 billion, was either imported from or exported to Northeast Asia, which includes China.

“As the trade war lingers, these tariffs continue to impact the U.S. economy and have created uncertainty for the business of importers and exporters,” Long Beach Executive Director Mario Cordero said.

While in London for the NATO summit, President Donald Trump said Dec. 3 that a trade deal with China might have to wait until after the November 2020 election. Earlier, the president had said the first phase of the agreement was close to being wrapped up.

“In some ways, I like the idea of waiting until after the election for the China deal. But they want to make a deal now, and we’ll see whether or not the deal is going to be right; it’s got to be right,” Trump said.

“This trade war is finally having some contagion on even the biggest ports, Los Angeles and Long Beach,” said Tyler Rushford, the executive director of the Intermodal Carriers Conference of American Trucking Associations. “It’s like a fever; you probably have something else that’s causing that, like potentially the flu. At that big of a port, unless you’ve changed something dramatically, it’s likely something bigger.”