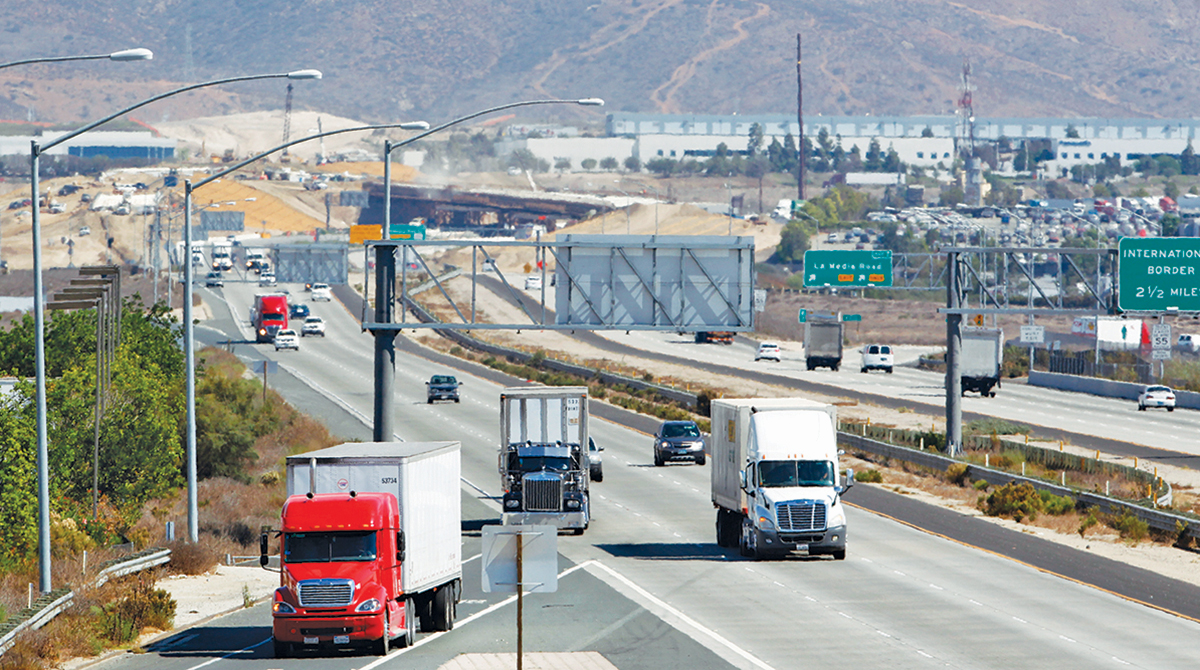 Trucks on the road in California. (John Sommers II for Transport Topics)

Truck tonnage in December rose a seasonally adjusted 1.4% compared with the same month in 2020 — the fourth consecutive year-over-year gain and the highest measurement since March, American Trucking Associations announced.

ATA Chief Economist Bob Costello noted the index was trending up for most of the second half of last year.

“December’s gain was the fifth straight, totaling 4.4%,” Costello said of the cumulative monthly gains to close 2021. “In December, tonnage reached the highest level since March, but it was still 2.7% below the pre-pandemic high. This is likely due to the fact that ATA’s data is dominated by contract freight. Contractor truckload carriers operated fewer trucks in 2021 compared with 2020 and it is difficult to haul significantly more tonnage with fewer trucks. But overall, we have seen a nice trend up that is reflective of a still growing goods economy.”

The December tonnage gains were helped by a strong holiday shopping season. The National Retail Federation on Jan. 14 said retail sales during the November-December holiday shopping season rose 14.1% over 2020 to $886.7 billion, topping the group’s expectations and setting a new record despite challenges from inflation, supply chain disruptions and the ongoing pandemic.

The NRF number includes online and other nonstore sales, which were up 11.3% at $218.9 billion.

“Consumers were backed by strong wages and record savings and began their shopping earlier this year than ever before,” NRF President Matthew Shay said. “NRF expects further growth for 2022, and we will continue to focus on industry challenges presented by COVID-19, the supply chain, labor force issues and persistent inflation. The numbers are clear: 2021 was an undeniably outstanding year for retail sales.”

December’s DAT Truckload Volume Index, also released Jan. 18, was up 18% year-over-year, reflecting strong truckload freight volumes as 2021 came to a close. DAT reported both spot and contract rates for freight were up in December.

The national average spot rate for van freight was 54 cents per mile higher than a year ago, up to $3.00 per mile.

The national average rate for flatbed loads was up 59 cents year-over-year to $3.08 a mile.

“While it’s not unusual to see a decline in the number of loads moved from November to December, spot-market volume was historically strong last month,” DAT Chief of Analytics Ken Adamo said in a statement. “Truckers experienced unparalleled demand during the holiday season.”

Trucking serves as a barometer of the overall U.S. economy, representing 72.5% of tonnage carried by all modes of domestic freight transportation, including manufactured and retail goods, ATA said. In 2020, trucks hauled 10.23 billion tons of freight. Motor carriers collected $732.3 billion, or 80.4% of total revenue earned by all transport modes.

A Clouded Outlook for Global Freight