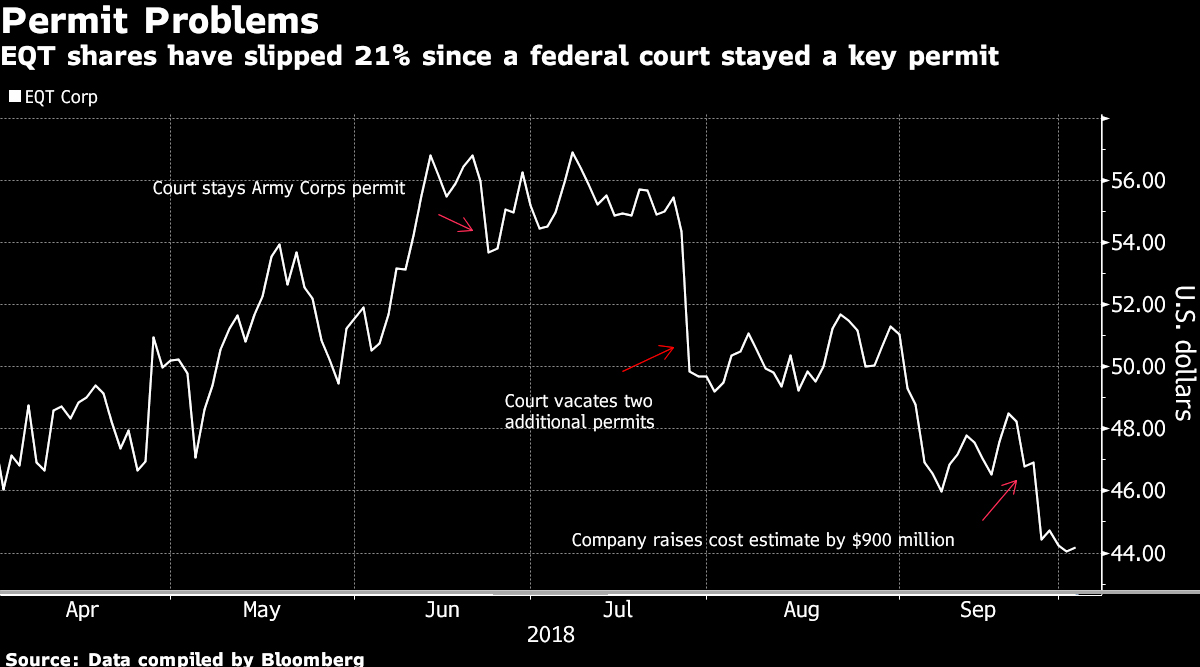 A $4.6 billion shale gas pipeline that already has been delayed by about a year is facing another setback after a court vacated a key permit.

A U.S. appeals court voided a federal authorization for EQT Midstream Partners’ Mountain Valley conduit, which is designed to carry natural gas from the Marcellus basin in Appalachia — America’s biggest reservoir of the fuel — to Southeast markets.

The court sided with environmental groups in a ruling Oct. 2, saying the Army Corps of Engineers wasn’t allowed to require a certain method for building across rivers after West Virginia already had imposed a special condition for that work.

The decision is “a huge blow to the project and a real surprise to us,” Bloomberg analyst Brandon Barnes said.

EQT Midstream is “disappointed” with the decision and is in the process of figuring out whether it can continue construction that doesn’t include stream and wetland crossings along the affected portion of the pipeline route, spokeswoman Natalie Cox said in an e-mail statement.

Mountain Valley has faced mounting legal and regulatory hurdles, which have pushed the project’s estimated start date from its original timeline a year earlier and forced the developer to raise cost estimates by almost $1 billion.

Other eastern U.S. pipeline projects, including Dominion Energy Inc.’s Atlantic Coast line, have faced similar woes. The conduits would join several built in the region over the past few years as Marcellus drillers seek outlets for abundant shale supply.

The same court in late June issued a stay on a portion of the Army Corps’ permit, which was lifted Aug. 29. Since the initial stay, EQT Corp. has seen its shares fall 21%.

The Federal Energy Regulatory Commission, which oversees state-crossing gas pipelines, likely will halt all construction on the project in response to the court’s most recent order, Barnes said. Work on the pipeline already was ordered to stop for about a month after the U.S. Court of Appeals for the Fourth Circuit vacated permits from the Bureau of Land Management and Forest Service.