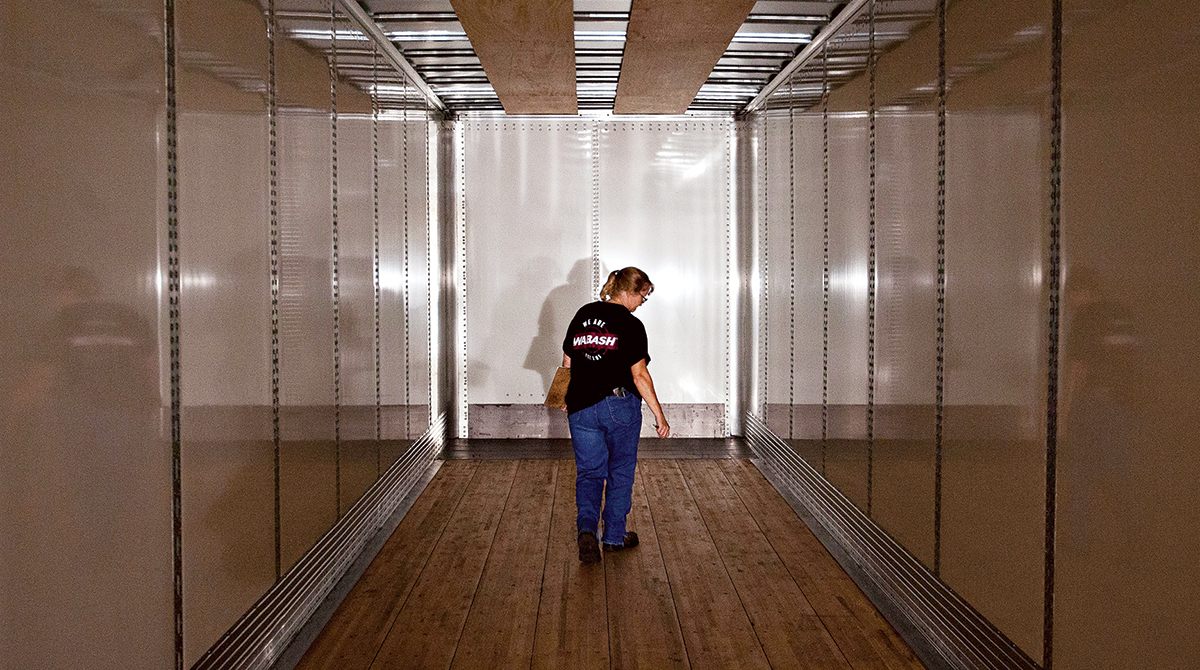 An employee inspects the interior of a recently completed trailer at the Wabash National Corp. facility in Lafayette, Ind. (Daniel Acker/Bloomberg News)

Net U.S. trailer orders in September strengthened to nearly 19,000 compared with weaker tallies during the summer, but still were far below the record year-ago level, ACT Research reported.

Still, optimistic reports emerged that the market is stabilizing.

“A softer, but noticeable order season is now underway, as orders in September were the best since February,” said Frank Maly, director of commercial vehicle transportation analysis at ACT Research.

He added the pace of cancellations in September appeared to have slowed too.

One executive with a multi-state trailer dealership with operations in Mexico as well, said falling orders and sales of trailers earlier this year were affected by some small- to medium-sized fleets that had became overextended.

“They had that business in 2018 at a really good rate, then all of a sudden freight tightened and those rates weren’t there [in 2019]. They then got into situations where they needed to get rid of trailers,” said Chad Strader, president of Ervin Equipment, which sells new and used trailers.

The price of used trailers dropped as more came on the market. “We saw a 25% to 30% drop in values in the past six months to eight months,” he said.

But signs of stronger demand are emerging again as peak shipping season and deliveries to distribution centers begin in earnest ahead of the holidays. “As a dealer, there is more interest now in the past 60 days or so then there was in the 90 days to 120 days previous to that,” Strader said.

“If the numbers are high in September, typically it means you’re headed for a good year next year. So these numbers were decent. They weren’t great. They weren’t overly high, they weren’t low. If they had stayed at 10,000 [August’s net orders] that would have been a warning signal that next year was going to be weaker than expected,” he said.

Orders over the previous four months averaged about 9,250.

Ake said that what happened in 2016 was vans and refrigerated trailers remained “pretty strong and the vocational trailers took a pretty significant dip” — and it looks like that is going to happen again this year, and into next year.

“It’s back to the economy. The industrial and manufacturing sectors are weak. The segments closely aligned with those are flatbeds and dumps,” he said.

Craig Bennett, senior vice president of sales at Utility Trailer Manufacturing Co., reported Utility’s business has stabilized and “stopped contracting. But business is choppy right now, and is from across all segments.” 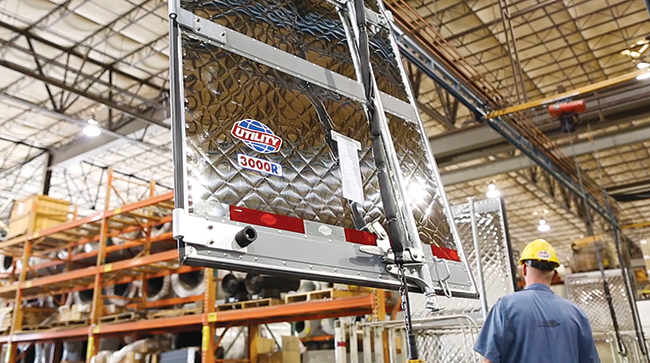 At the same time, there are a few cancellations and some delays on production requests, he added.

Bennett repeated that what the industry needs is “tariff clarity, and soon.”

Meanwhile, he forecast 2020 industry volumes will be off 5% from 2019. He said California Air Resources Board regulations will be implemented Jan. 1, and they are causing consternation. To be able to sell trailers in California then, trailer makers must certify the equipment meets the state’s greenhouse gas emission standard and be approved by CARB.

While trailer manufacturers are responsible for meeting the requirements, fleets will be responsible for “ensuring the technologies listed on new trailer emission labels are maintained on the trailers for their 10-year useful life,” Mike Tunnell, director of environmental affairs for American Trucking Associations, said in April.

He said another issue was how the emission warranty must match any structural warranty on the trailer.

The Environmental Protection Agency’s Phase 2 included trailer rules for the first time, as only trucks and their engines had been regulated. A federal appeals court has issued a stay on EPA’s trailer rule.

Manufacturers also must register for their own unique manufacturer code assigned by EPA before submitting their package, CARB noted.

“We did see an uptick in orders in September and continue to see that in October,” said David Giesen, vice president of sales at Stoughton Trailers. “It’s back into much more normal times. Order activity should be strong from September through January.”

He added that Stoughton is expanding its dealer network to improve geographical coverage in North America. “With the growth of our reefer product and continued in-house leasing and financing services, we expect growth through all channels. We continue to have very few cancellations as our backlog is filled with solid orders.”

Strick Trailers President Steve Burns said fleets “continue to analyze the quantities of equipment they have in a mildly declining tonnage market.”

In particular, Burns said, large fleets are finally placing 2020 orders and cancellations are few at Strick.

Strick also reported plans in mid-November to offer a new program for designated dealers that will include special dealer pricing, among other features.

October US Trailer Orders Soar to Third-Highest Level Ever