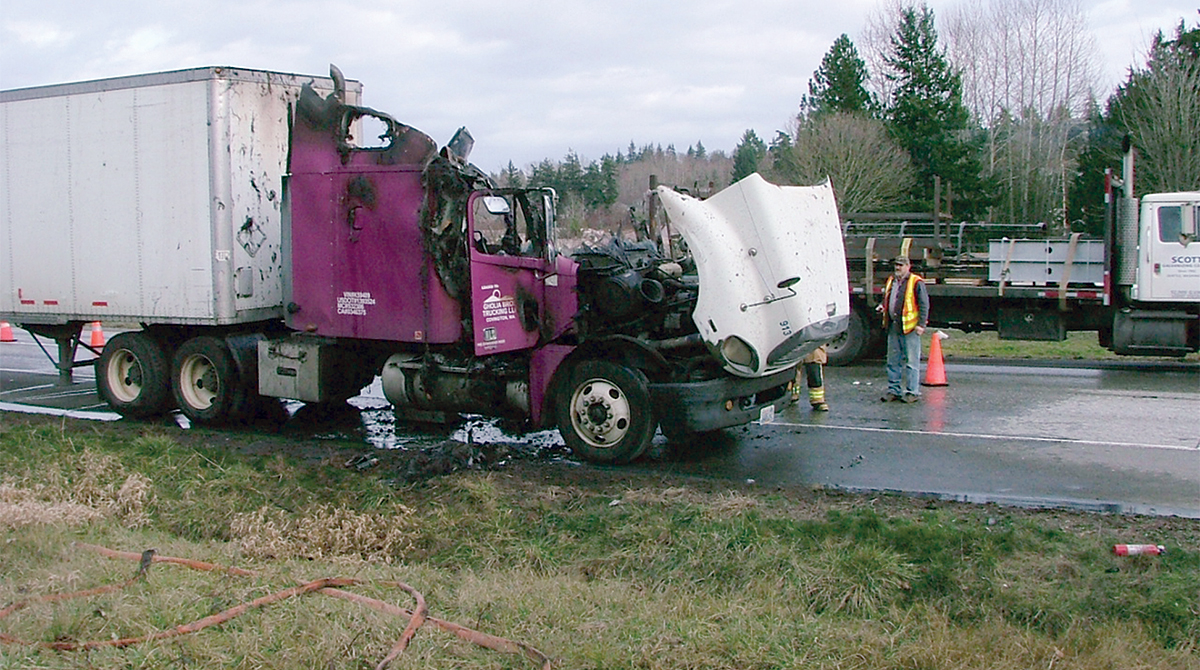 The aftermath of a truck fire. (Washington State Department of Transportation/Flickr)

Fires in tractor-trailers, often referred to as thermal events, can result in significant damage to equipment as well as cargo, but despite an ongoing focus on preventing them, the number of incidents doesn’t appear to be dropping.

“The interesting thing is that after all of these years of discussing it, we’re still seeing the issue. You’d think this would be going away,” said Jack Legler, technical director for the Technology & Maintenance Council, which is part of American Trucking Associations.

For Glen McDonald, director of maintenance for Memphis, Tenn.-based Ozark Motor Lines, minimizing the risk of a tractor-trailer fire is a priority. “If you see one, it is too many,” he said.

One engineer said he has seen brackets or straps that hold wires break down, which could be a potential cause of fires. Complicating the matter is the fact that wires can be hidden within the truck and hard to spot, said Daniel McDonough, a mechanical engineer with ARCCA, a Philadelphia-based forensic engineering firm.

“Sometimes the driver says they were having intermittent electrical problems, and those can be good indicators,” he said.

As a result, fleets are taking a multipronged approach to reduce the risk of a thermal event, Sturdy said. “There isn’t a silver bullet.”

In the past, Kenan Advantage discovered wiring problems within electric auxiliary power units had caused thermal events. “It was wires being abraded because they were rubbing something. They weren’t routed correctly,” Altrichter said, adding that the National Highway Traffic Safety Administration ultimately issued a recall for the faulty parts. 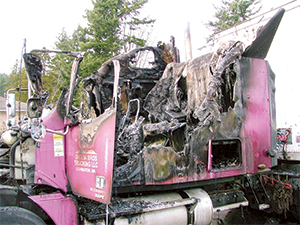 The aftermath of a truck fire. (Washington State Department of Transportation)

Hazards on the road also are a concern.

“If you drive around the countryside, you’ll notice there are more hazards on the road,” Altrichter said, adding that debris and trash on roads can damage a tractor-trailer.

“We had an incident where a driver ran over a mattress, and it knocked the air lines off and caused a thermal event.”

For the past year, Southeastern Freight Lines, based in Lexington, S.C., has focused on its maintenance practices and equipment specifications, which has reduced the number of thermal events the fleet has experienced, said Lee Long, director of fleet services for the carrier. Southeastern ranks No. 30 on the for-hire TT100.

Long said Southeastern Freight Lines experienced thermal events in its combination vehicles that have a pup trailer tethered behind a 53-foot dry van.

A converter dolly connects the trailers, and if the seals between the trailers become contaminated or damaged, the pup trailer can be starved for air, and the rear brakes start activating. “There is also a situation called false charging on the rear trailer,” Long said.

What’s more, slack adjusters could create a problem if they’re too tight.

Southeastern Freight Lines changed some preventive maintenance prac­tices, and technicians do a deeper dive on the valving on the trailers to ensure they are operational until the next PM, Long said.

“We also changed specs so water, dirt, sand, snow and ice can’t get into the system,” he added.

Because it takes air to release the brakes, if there is an air leak, brakes will start to drag because there isn’t enough pressure to release them, Kenan Advantage’s Altrichter said.

Once brakes start rubbing, they create heat. If the brake is continuously dragging on one wheel, for example, “the driver might not even feel that. He is driving along for 100 miles at 60 to 70 miles per hour. It can create so much heat that it burns the rubber,” ARCCA’s McDonough said.

Southeastern Freight Lines conducts a voluntary brake blitz and evaluates every dolly and combo unit that comes to the maintenance shop.

“We check everything from the front to the rear,” Long said, adding that the fires are an opportunity to talk with drivers, so they know what is going on with their equipment and what to examine.

Long said the fleet also uses tire inflation systems, which illuminate a light when there is a low tire or a tire that is being aired up. This alerts the driver and prevents a low tire from creating a larger-scale problem.

“He can pull off to the side of the road and get that corrected before it becomes an issue,” Long said.

A tire that is significantly underinflated or with no inflation pressure could lead to the build up of heat that could start a fire, said Phil Arnold, military technical manager for Michelin North America.

Running a tire with no inflation pressure and potential subsequent deterioration of the rubber compounds can lead to large amounts of friction between remaining elements of the tire and possibly the wheel touching the ground if the truck driver does not stop the vehicle, Arnold said.

Thorough brake maintenance can minimize the risk of a fire. 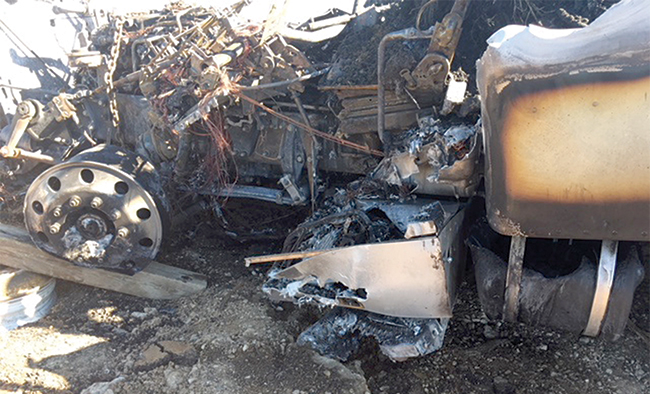 “When it is in for service, they should be doing a bleed down test to see how long it is taking for air to drain off and follow the TMC practice on that,” Altrichter said.

The temperature at which tire rubber begins to generate flammable ­vapors or start to burn is very high, Arnold said.

He added that with tires, the most important factors are maintaining an effective tire inflation program, identifying tires that are low or flat during the driver’s pre-trip inspection and stopping the vehicle if a tire has lost its inflation pressure.

Wheels and bearings also are a primary focus. If not maintained properly, they can contribute to thermal events. 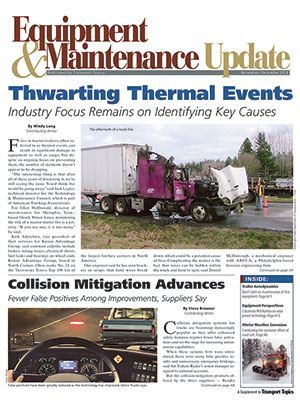 To help identify a bearing failure, drivers can watch the wheel rotation in the mirror.

“With a bearing failure, you should start to see the wheels move dif­ferently,” Altrichter said. “You should also see it in irregular wear patterns on the tires.”

Bearings fail either because debris enters and causes damage or because there is a lack of lubrication and the bearings overheat, Altrichter said. “Both are preventable through regular maintenance and making sure you have a sealed wheel end,” he said.

McDonough said he also sees issues with bearings. “If you don’t have grease in the bearings, they can get really, really hot. You have metal on metal rubbing, and it can get hot enough to ignite any grease or components in that area,” he said.

Overtight wheel bearings can create a tremendous amount of heat. “If you do improper maintenance and tighten your bearings too much, it will heat up and can melt the metal,” Accuride’s Sturdy said.

If someone pulls open the wheel end and the wheel still spins, it isn’t a problem with a bearing, Sturdy said.

“Bearing problems result in high temperatures, in excess of 1,300 degrees, and will literally fuse the bearing to the unit. It is pretty extreme when those happen,” he said, adding that even a tire fire isn’t hot enough to melt a bearing.

When bearing issues do occur, they’re likely due to a lack of main­tenance or the set-up. Sturdy said bearing issues are usually the least common cause of a thermal event and the easiest to evaluate forensically due to the amount and type of damage. McDonough said he sees a lot of brake and bearing-type fires in tractor-­trailers, which he said can be caused by improper maintenance or general wear and tear. He also has seen engine fires caused by bearings that failed within a turbocharger.

Meanwhile, today’s equipment can make it difficult for drivers to identify potential issues before they occur, the experts said.

“Drivers tell me that with the automatic transmissions and the way things are geared today, they don’t necessarily feel anything,” Altrichter said, adding that drivers should notice sparks and smoke if they’re paying attention.

“There is enough power in these units that now you don’t necessarily know you’re running low and then they start getting hot,” Sturdy added.

Drivers are supposed to do daily pre- and post-trip inspections, ­McDonough said.

“If they spot something that is not right or things look like they’re worn, the driver has a responsibility to make sure it is in good working condition and not install aftermarket systems themselves,” he said. 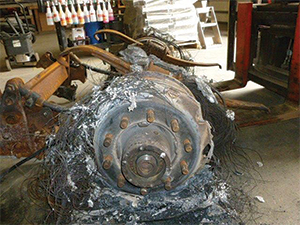 The intense heat from a wheel-end fire can lead to substantial damage to heavy-duty equipment. (Kenan Advantage Group)

Aerodynamic devices on trailers, such as skirts, don’t cause fires, but they do limit some of the airflow and natural cooling ability if a tire is getting hot. “You catalyze the issue that is already there,” Sturdy said.

Those in the industry said preventive maintenance plays a critical role in minimizing the risk of tractor-trailer fires.

The purpose of a good PM program is “to identify those issues before they happen,” Ozark’s McDonald said, noting that properly trained technicians are critical.

“I hope to learn about new processes that might help with that problem,” he said of TMC addressing the issue. Old Dominion ranks No. 11 on the for-hire TT100.