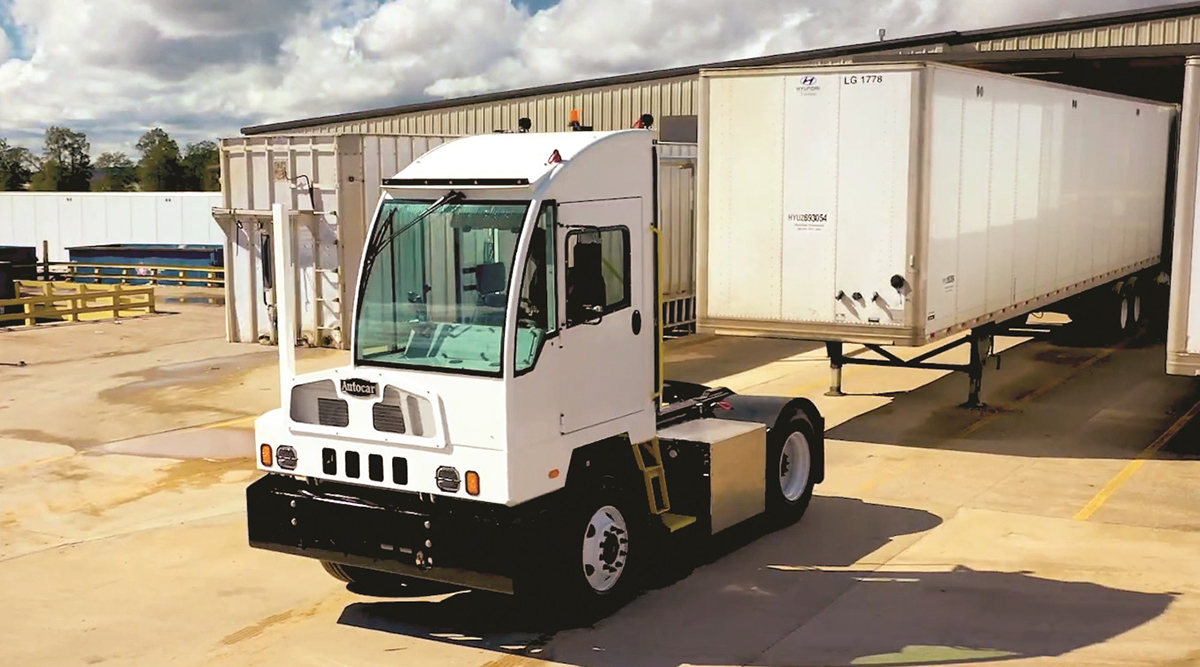 In December, Tesla Inc. plans to deliver the first of its electric Semi trucks — able to haul a full 40 ton-load some 500 miles on a single charge. These massive batteries-on-wheels may accelerate the transition to electrified transport, but those responsible for delivering the power are starting to ask: Are we ready for this?

Probably not, according to a sweeping new study of highway charging requirements conducted by utility company National Grid Plc. Researchers found that by 2030, electrifying a typical highway gas station will require as much power as a professional sports stadium — and that’s mostly just for electrified passenger vehicles. As more electric trucks hit the road, the projected power needs for a big truck stop by 2035 will equal that of a small town.

Even the authors who planned the study were caught off guard by how quickly highway power demands will change. A connection to the grid that can handle more than 5 megawatts takes up to eight years to build, at a cost of tens of millions of dollars. If power upgrades don’t start soon, the transition to electric vehicles — let alone electric trucks — will quickly be constrained by a grid unprepared for the demand, warned Bart Franey, vice president of clean energy development at National Grid.

“We need to start making these investments now,” Franey said in an interview. “We can’t just wait for it to happen, because the market is going to outpace the infrastructure.” 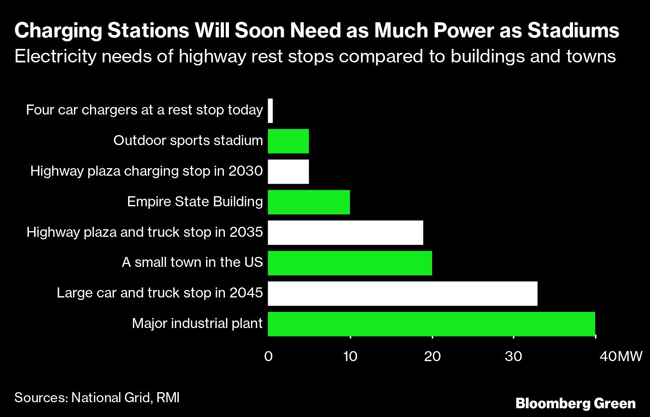 The total amount of new electricity that EVs will consume isn’t the problem. Even if the world stopped making new gasoline-powered cars and trucks altogether by the early 2030s — an optimistic scenario — it would add no more than 15% to the world’s electricity consumption by 2040, according to an analysis by BloombergNEF. In the age of cheap wind and solar power, that’s not a lot.

The real challenge is how quickly high-speed chargers will need to deliver electricity at a single place and time. Think of electricity like water flowing through a hose. You could fill an Olympic-sized swimming pool with a garden hose if you had a few months, but filling it in a few hours would require a firehose. In the world of electric vehicles, an 18-wheeler is like a swimming pool — and the connections available at today’s highway stops are akin to garden hoses.

“It’s not like plugging in a toaster. If you put 50 trucks somewhere, that is basically equivalent to a factory,” said Dave Mullaney, who leads analysis of electric trucking at the RMI energy research institute. “Utilities know how to build factories, but it’s the process and sequencing required that’s scary to me. Utilities need to be starting half a decade ahead of the trucks in order to not be bottlenecking the transition to electric trucks.”

National Grid studied fueling behaviors at 71 highway gas stops of varying size along interstate corridors in New York and Massachusetts. They applied those behaviors to projections for EV adoption to estimate peak electricity demand. To model the behavior of passenger vehicle projections, industry consultants at Stable Auto Corp. provided data from 3,000 fast-chargers across the U.S. For medium- and heavy-duty trucking, the study used fleet-tracking telematics from Geotab Inc. 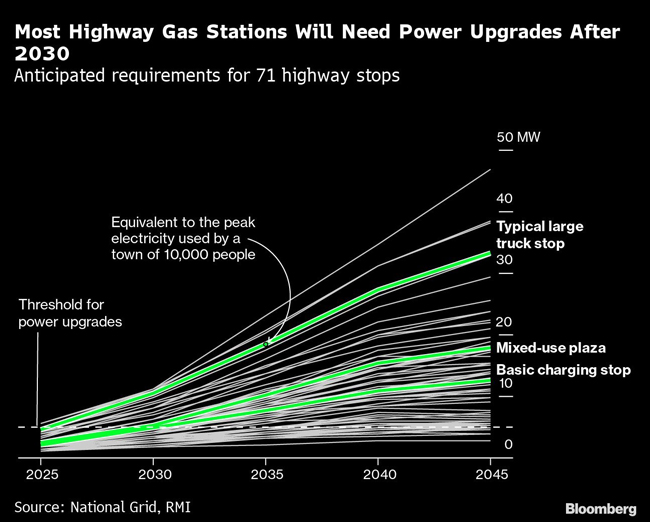 The Big Rigs are Coming

Tesla’s upcoming Semi may be the first with a battery range that’s capable of longhaul trips across the country, but it isn’t the first electric truck. Daimler Truck Holding and Volvo Group already have Class 8 heavy-duty trucks on the road. These electric vehicles are designed for local and regional deliveries, and charge between deliveries or overnight at the factories and distribution centers where they’re based.

But even for short-distance routes, some customers are already running into problems with infrastructure, said Rakesh Aneja, head of electric trucks at Daimler Truck North America. Several customers had to reconsider purchasing Daimler’s Freightliner eCascadia after discovering that it would take a year longer to connect their chargers than it would to receive their trucks.

“Utilities are waiting for a customer application to come in requesting new service before they start their work, and that process is just too long,” Aneja said. “You really have to anticipate that demand and then get started ahead of time. That requires a paradigm shift from a policy and a regulatory perspective.”

Charging infrastructure for commercial trucks is still in its infancy. More than $1.2 billion of investments have been announced for chargers in 2022 and 2023, enough to build more than 4,000 truck-charging points in the U.S. and Europe, according to a tally by BloombergNEF. Most of that is for pilot projects, with bigger investments to follow.

In the U.S., government incentives pushed the timeline for mass electric truck adoption forward by 5 to 10 years, according to an RMI analysis. The landmark climate component of President Joe Biden’s Inflation Reduction Act, passed this year, will supercharge truck demand with a $40,000 incentive for each heavy-duty truck sale. Biden’s infrastructure package, passed in 2021, set aside $7.5 billion to help fund a national system of chargers, with additional funds to help pay for upgrades to the grid.

Still, for the next few years most of the focus will be on building out charging networks for passenger vehicles. By 2030, it will be electric cars and electric pickup trucks that will be responsible for pushing half of the 71 stations studied by National Grid over the key 5 megawatts threshold. That’s typically when major upgrades are required, including a new substation connection to high-voltage power lines.

The way many utilities are currently structured, most of the cost would be paid upfront by the fueling station, at a cost of tens of millions of dollars per rest stop, even though the same substation could later be used for decades by multiple facilities within a one-mile radius. That kind of huge expense would halt charger upgrades at many locations, according to U.S. government officials with access to National Grid’s report.

The high-voltage lines that will be central to the coming transformation are extremely robust. In major storms with power outages, those lines are rarely the problem. Indeed, some towers raised by teams of horses in the early 1900s are still in use more than a century later. Over that time, standards for modifying and upgrading transmission lines evolved gradually, just as demand rose predictably over the decades.

That will not be the case this time. With the amount of change the grid will be experiencing in the next few decades, the old rules for when to build interconnection upgrades — and who pays for them — no longer make sense, said Brian Wilkie, director of transport electrification at National Grid. Building connected electricity highways will be a competitive advantage for states that move the fastest, and every utility should be conducting similar studies to evaluate future demand, he said.

National Grid says the location of these high-voltage taps should help guide decisions for where future charging stations and distribution facilities will be built, rather than the other way around, leading to cost savings of about 35%.

“The No. 1 concern for fleets wanting to electrify all of their vehicles is the infrastructure required,” Wilkie said. “They know they can’t sell trucks without the power to charge. If they can solve that piece, they can scale the market much more quickly.”