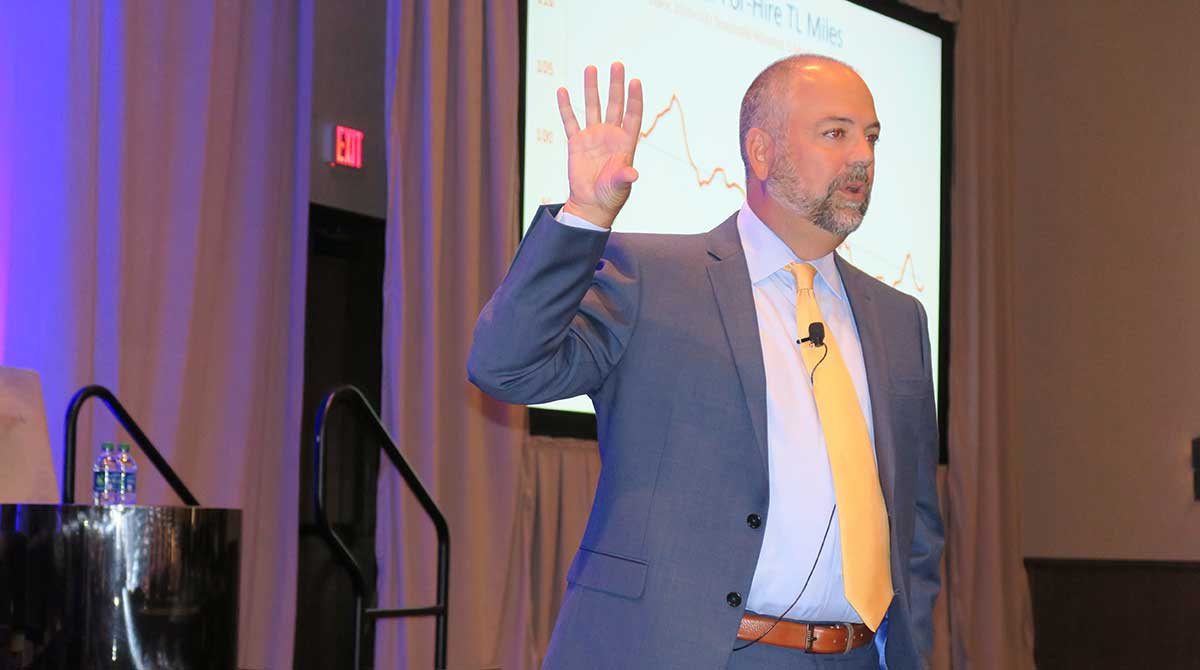 NASHVILLE, Tenn. — The U.S. trucking industry is enjoying its best business environment since deregulation in 1980, and the good times will continue in the near term unless trade disputes hinder economic growth, American Trucking Associations Chief Economist Bob Costello said.

“This has been the best time in trucking history, I’d say. The question is, how long is it going to last?” he said in remarks here July 24 at McLeod Software’s CFO Conference.

Costello forecast that U.S. gross domestic product will grow by 3% this year, followed by 2.7% growth in 2019.

Even in the midst of what already has been a long period of economic expansion, Costello said he still doesn’t plan to begin talking about the timing of the next recession probably for another year.

ATA’s Costello: We are at full employment in this economy. It’s one reason why your companies are having a hard time finding drivers. @McLeodSoftware CFO Conference pic.twitter.com/T4dgCaOJZn — Seth Clevenger (@SethClevenger) July 24, 2018

The three main sources of freight demand — consumer spending, construction and factory output — are doing well at the same time, and there is no longer a glut of inventory across the supply chain, he said.

Under these conditions, the main operational challenge for fleets is driver recruiting and retention.

“We are at full employment in this economy,” Costello said. “It’s one of the reasons why your companies are having a difficult time finding drivers.”

In fact, fewer people are searching for jobs than the number of jobs available, according to the U.S. Department of Labor.

“For the first time since they started calculating this data, we now have more job openings than unemployed people,” Costello said. “That’s astounding to me.”

Despite his bright outlook, Costello highlighted one key risk that could tap the brakes on this economy.

“There is one dark cloud on the horizon that is a wild card in all of this, and that is a trade war,” Costello said. “Tariffs, at the end of the day, are taxes on us.”

The United States did need to level the playing field in some areas, especially in trade with China, he said, but the new tariffs imposed by the Trump administration and retaliatory measures by other countries ultimately could slow down volumes.

In addition to the broader economic impact, tariffs could raise the cost of transportation equipment.

Unless something changes, 53-foot intermodal containers built in China soon will be subject to a 25% tariff, even though currently there are no domestic manufacturers of those containers, Costello said. “Hopefully, we can still step this back.”

Costello also emphasized the value of the North American Free Trade Agreement for the transportation industry. NAFTA trade accounted for $6.62 billion in U.S. trucking revenue in 2017, he said.

ATA’s Costello: truck driver shortage could expand to 175,000 by 2026 if current trends continue. “Not only is our industry in trouble if we get there, our economy’s in trouble.” @McLeodSoftware CFO Conference pic.twitter.com/WPaPA8SImA — Seth Clevenger (@SethClevenger) July 24, 2018

While the driver shortage is a problem across the trucking industry, it is far more acute in the over-the-road, for-hire truckload sector, which currently employs about 500,000 drivers, Costello said.

“Not only is our industry in big trouble if we get there, our economy’s in big trouble,” Costello said. “Trucking hauls 70% of the freight tonnage in the U.S.”

He cited the DRIVE-Safe Act, a bill that would allow 18- to 21-year-old drivers to cross state lines if they meet certain conditions. If passed, that legislation could create a better pathway for young drivers to enter the industry.

Reducing driver detention time also could boost freight-hauling capacity, Costello said. If the average driver who runs about 8,000 miles per month could add 500 miles due to less waiting time at shippers and receivers’ facilities, it would increase industry capacity by more than 6% without adding a single truck to the road, he said.

The industry also must do a better job of bringing in female drivers, he added. Women represent about 6% of all drivers but 47% of the total workforce.