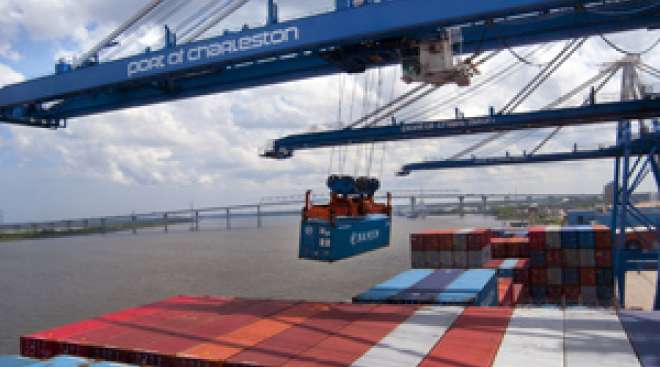 The South Carolina Ports Authority set a record for container movement in May and projects 7% year-over-year growth for fiscal 2016 fiscal, which begins next month.

SCPA handled 104,003 boxes in May, a record for the number of containers. Fiscal year-to-date box volume already has eclipsed fiscal 2014 totals with a month to go in the fiscal year, which ends June 30.

SCPA handled 181,809 20-foot equivalent units last month, an increase of 12.5% from the same month last year. It projects pier container volume of 1.15 million boxes in the coming fiscal year and anticipates strong growth at its Inland Port, with rail moves expected to increase 7%.

The board approved a capital spending budget of $165.6 million for fiscal 2016 and said it will invest $73.3 million in the ongoing construction of the new container terminal on the former Navy Base terminal, which will open in late 2019.

It is adding two new super post-Panamax cranes for large ships coming from the expanded Panama Canal, and a wharf-strengthening project and upgrades for refrigerated cargo at the Wando Welch Terminal are in the works.

“This plan builds upon year-over-year success of our port system,” SCPA Board Chairman Bill Stern said. “The 2016 fiscal year will be a significant time for our port and state.”