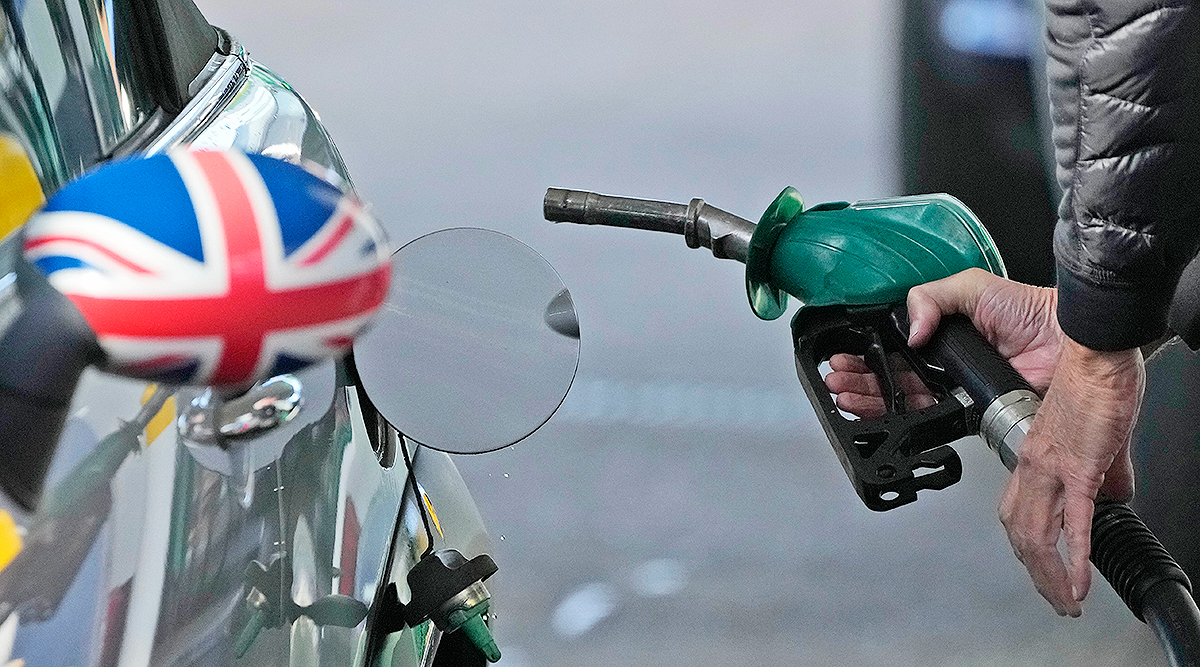 A driver fills a car with fuel at a petrol station in London Sept. 29. (Frank Augstein/Associated Press)

LONDON — The British government’s reserve tanker fleet was being deployed Sept. 29 to help deliver gasoline to empty pumps across the U.K., and military drivers will begin operating tankers in the coming days to ease the country’s fuel supply crisis, a top official said.

Business Secretary Kwasi Kwarteng said the first of dozens of troops trained to operate gasoline tanker trucks will start appearing on the roads within days.

“It takes, sometimes, a few days to get troops on the ground. We have decided to do that. I think in the next couple of days you will see some soldiers driving tankers,” Kwarteng told reporters.

His comments came as the Petrol Retailers Association reported that Britain’s fuel supply crisis, triggered by a shortage of truck drivers, was easing. 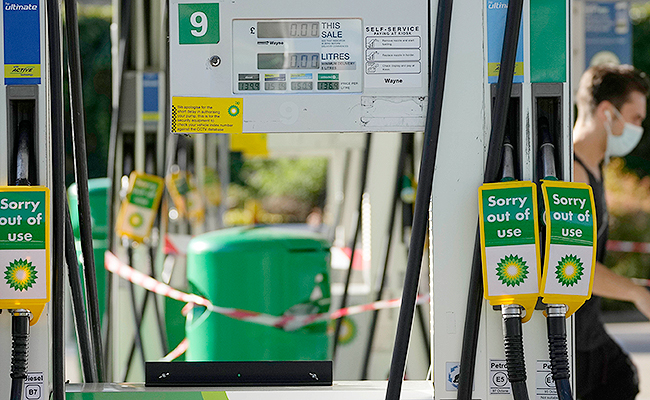 Petrol pumps show signs indicating they are out of use at a station in London Sept. 29. (Frank Augstein/Associated Press)

Many gas stations around Britain have shut down in the past five days after running out of fuel, a situation exacerbated by panic buying. Long lines of vehicles formed at pumps that still were open, blocking roads and causing traffic chaos. Some drivers have had to endure hourslong waits to fill up.

Gordon Balmer, executive director of the Petrol Retailers Association, which represents the majority of U.K. gas stations, said just 27% of members reported being out of fuel Sept. 29.

“With regular restocks taking place, we are expecting to see the easing to continue over the next 24 hours,” he said.

A joint statement issued by Shell U.K., BP and other fuel companies said they were “confident that the situation will stabilize further in the coming days."

The companies welcomed the deployment of the reserve tankers and said they were working closely with the government to maintain regular deliveries to gas stations. They reiterated that the truck driver shortage is the problem and there has “always been plenty of fuel at our refineries and terminals.”

But the taxi drivers’ union said about a quarter of its members were not able to work Sept. 28 and there appeared to be little immediate signs of the situation improving.

“It has not got any better. The queues at the station — if you can find a station with any to queue up — are not getting any better,” said Steve McNamara, general secretary of the Licensed Taxi Drivers Association.

The supply problems have stemmed from a shortage of as many as 100,000 truck drivers, due to a combination of factors including pandemic-related disruption to driver training, an aging workforce and an exodus of foreign workers after Britain’s departure from the European Union last year.

In addition to getting help from the army, Britain’s Conservative government is trying to entice former British drivers back into the industry, as well as accelerate the training of new drivers.

It also is offering visas to 5,000 foreign drivers to come to the U.K for three months, but critics and others including Romanian truck driver Bron Zoltan said that timeline is too short.

“I heard about the three-month visas,” he said. “If you give me a contract for three months, then what? What will happen to me?”

Workflow Software Could Be Part of Solution to Truck Driver Shortage