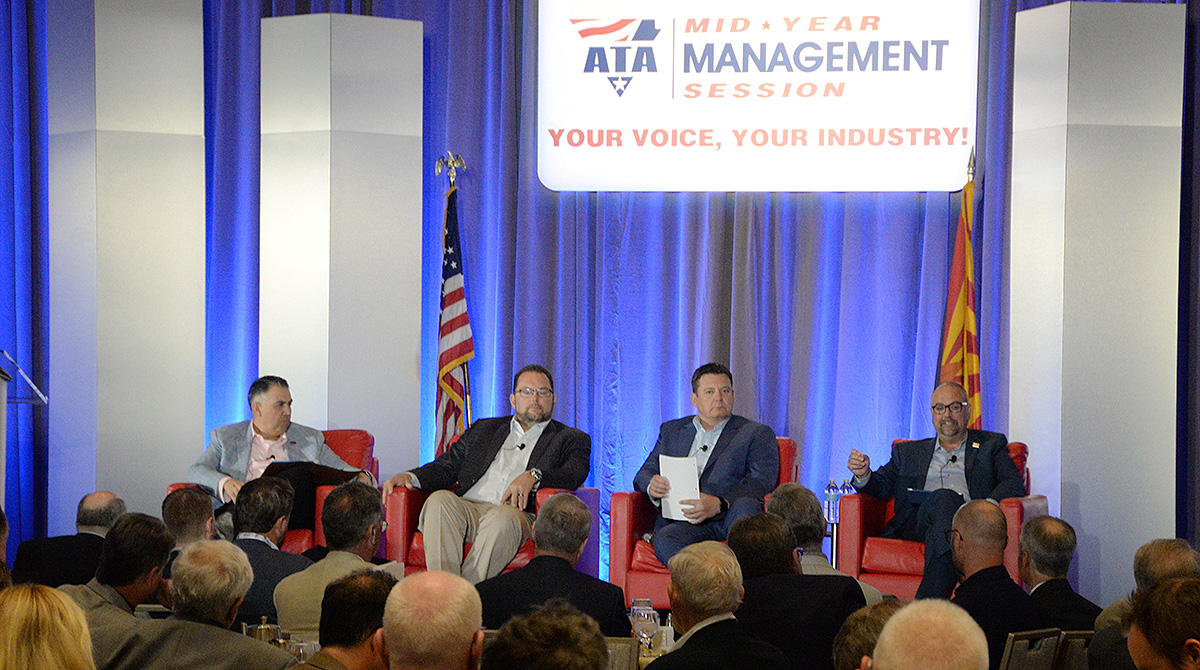 “The one thing that is loud and clear in Mexico is we need this agreement in place and need to get this put to bed,” said Derek Leathers, CEO of Werner Enterprises.

For Werner Enterprises, which is based in Omaha, Neb., and ranks No. 15 on the Transport Topics Top 100 list of the largest for-hire carriers in North America, one-third of its one-way truckload revenue comes from its cross-border traffic with Mexico.

Leathers spoke on a panel along with Rob Penner, CEO of Bison Transport, and Bob Costello, chief economist for American Trucking Associations.

Costello said Canada and Mexico are the United States’ second- and third-largest trade partners, respectively, after China. For export, Canada is No. 1, Mexico is No. 2.

Penner said Bison Transport, which is based in Winnipeg, Manitoba, and ranks No. 65 on the TT100 for-hire list, is celebrating its 50th year and has been operating in the U.S. that entire time. He added that Bison is the largest Canadian truckload cross-border operator, completing 350,000 border crossings last year.

With passage of USMCA so critical to freight transportation, ATA was one of the founding members of the USMCA Coalition that is run through the U.S. Chamber of Commerce. Costello said there is a tight window to get USMCA ratified. “If it goes beyond October, the presidential election starts,” he said.

If it doesn’t get ratified, NAFTA would remain in place unless President Donald Trump announced that the U.S. was pulling out of the agreement. “If that happens, that starts a six-month clock. At the end of that six months, we can pull out, but we don’t have to,” Costello said.

If the U.S. did leave NAFTA, it has a pre-NAFTA trade agreement with Canada but not Mexico. “You’d have more products with tariffs going across the border,” Costello said.

Penner said that Canadians would by and large be satisfied with USMCA, but the chances of it passing are slim as long as tariffs loom large. Costello explained there are 232 tariffs on steel and aluminum.

“We don’t feel like the sky will fall even if NAFTA slips back,” Penner said. “We feel there would be pressure on the supply chains over time, but everything would revert back to our previous trade agreement.”

However, Penner said, things would become very expensive for everybody on both sides of the border, which would have an impact on both economies.

Leathers said falling back beyond NAFTA with Mexico would be “relatively catastrophic” for southern border operations, and he said border delays could increase dramatically.

Border delays between the U.S. and Mexico have increased during the past few months, sometimes reaching 11 hours or more, as 545 Customs and Border Protection officers have been moved away from truck crossings to help process asylum seekers.

On April 23, the southern truck crossings got 100 of those officers back. Another 125 came back April 28, and another 75 are slated to return May 12, Costello said. “That leaves a deficit of 245,” he said, adding that the underlying problem is a lack of resources. “It shows you what would happen if you shut down a border or if NAFTA went away.”

Drivers have also experienced border crossing delays at the northern border, with Penner saying wait times there have tripled.

Trucking and trade are synonymous.

Extended border delays can disrupt the supply chain. “The first day [the southern border] was backed up for hours and hours; there were factories this close to shutting down lines. They weren’t getting products in time,” Costello said. “If that border closed for a week, you’re talking about a recession instantly.”

Going forward, Penner said he sees more opportunities for pre-clearance at the Canadian border, especially for food products. “Those facilities are only open 10-12 hours a day and half of a day on Saturday,” he said.

Pre-clearance could also ease space constraints on the southern border, Leathers said. “There is only so much expansion you can do to make those crossings more robust, so whatever we can do to pre-clear is useful,” he said.