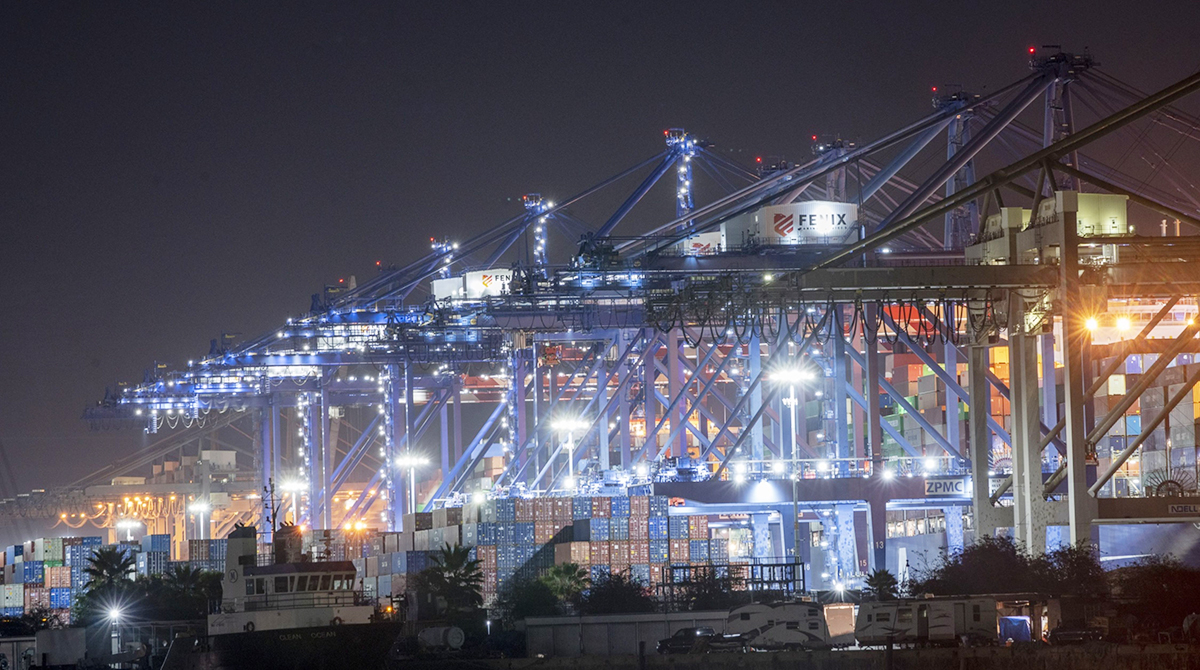 Shipping containers at night at the Port of Los Angeles on Oct. 13. (Kyle Grillot/Bloomberg News)

The ports of Los Angeles and Long Beach are gearing up to operate 24/7 to clear the massive backlog of 20-foot-equivalent (TEU) containers as they pile up at the two Southern California ports and others on the Pacific and Atlantic coasts.

Workers at Los Angeles in September processed 898,941 TEUs, making it the busiest September in the port’s 114-year history. That compares with 883,624 a year ago. Seroka said the facility could process a record 10.8 million containers by Dec. 31, compared with 9.2 million a year ago. If that number is reached, it will be up 17% over 2020 and the best calendar year for a Western Hemisphere port. 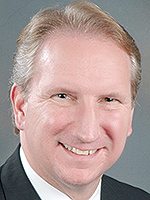 “We’ve been averaging more than 900,000 container units for the past 14 consecutive months. “The duration of this cargo run is quite remarkable,” Seroka said. “All of the indicators are pointing to a strong and steady volume flow over the months ahead.”

Officials said ships are waiting an average of 12 days before they can obtain a berth to unload at Long Beach and Los Angeles, and that backlog helped contribute to the year-over-year drop-off.

“We are having capacity issues due to the unprecedented number of containers waiting to move off the terminals, while warehouses have little to no room to accommodate this ongoing spike in cargo moving through our port,” Port of Long Beach Executive Director Mario Cordero said. “This is not just about a record number of ships waiting off the coast. We are working with state, federal, local and industry partners to address issues with the entire supply chain that have finally caught up with us.”

Nationally off-site warehouse vacancy rates are less than 4% overall and less than 2% near Long Beach and Los Angeles. California Trucking Association President Shawn Yadon told Transport Topics he is encouraged by the recent White House announcement, but a quick fix to relieve the congestion is not coming.

“Any step like this on 24/7 is certainly appreciated, but there is no single solution to this crisis,” Yadon said. “But if the trucks are there, you have to be able to pick up a chassis and then a container. Do you have a warehouse or distribution center that’s open in the middle of the night to go and transport it to?”

The Long Beach-based Harbor Trucking Association said some congestion can be fixed, but the shipping companies must do more.

“While ocean freight carriers and their marine terminal partners have been pointing the finger at the trucking industry for not utilizing appointments during this crisis, the underlying causes have continued to compound unchecked,” the association said in a statement. “Challenges faced by truckers doing business at the ports stem from productivity and efficiency issues that are not alleviated by merely shifting to 24/7 gate operations.”

The Port of Oakland reported a 19% year-over-year decline in September, moving 182,935 containers compared with 225,807 last year.

“From May through August 2021, the Port of Oakland experienced vessel congestion due to a longshore labor shortage, and some ships decided to bypass Oakland. Since then, the labor shortage was addressed by the hiring of hundreds of dockworkers by the ILWU. We’re now gradually seeing ocean carriers reinstating their services here in Oakland,” the port said in a statement, referring to the International Longshore and Warehouse union. “The drop-off reflects the fact that we had fewer ships visit Oakland in September. We do expect vessel calls to increase in our October and November statistics.”

The Northwest Seaport Alliance, which operates the Ports of Seattle and Tacoma, saw TEU volume decrease 1.2% year-over-year, moving 305,071 in September compared with 308,682 a year ago. Still, the port’s volume is up 17% when measured against 2020.

The Port of Virginia saw a 19.4% year-over-year increase reaching 306,219 containers and exceeding 300,000 TEUs for the second consecutive month on the East Coast.

“Looking into 2022, we see nothing that leads us to believe that there is going to be a drop in volumes,” CEO Steven Edwards said. “It is going to take some time before the supply chain returns to normal.”

Georgia’s Port of Savannah had its busiest September on record, processing 472,062 containers compared with 412,138 a year ago. Savannah is on a pace to top 5 million containers for the first time in its history, after cracking the4 million mark in 2017.

The Port Authority of New York/New Jersey and the Port of Charleston, S.C., have not yet reported container results.