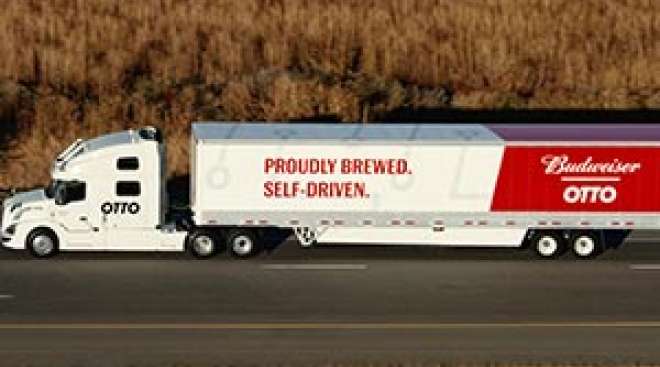 In what it called the world’s first shipment by a self-driving truck, technology firm Otto announced Oct. 25 that one of its heavy-duty, semi-autonomous trucks assisted in a 133-mile delivery for Anheuser- Busch InBev.

Otto was founded in January by former Google engineers and acquired in August by Uber Technologies Inc.

With a professional driver on board Oct. 20, the Class 8 tractor and its trailer loaded with 51,744 cans of beer traveled south in Colorado from Fort Collins to Colorado Springs — with 120 miles of the historic journey occurring with the truck in full autonomous mode on Interstate 25.

“This was sort of a commercial pilot of what the future might look like,” Otto co-founder Lior Ron said in an interview with Transport Topics. “At the end of the day, we want to commercialize the technology as soon as possible ... and we whet our appetite.” He said Anheuser-Busch paid “an average market rate” for such a load.

The driver took the truck from the point of origin onto the highway. But on the highway, he engaged the technology, got up and monitored the technology from the sleeper portion of the cab. He didn’t take control again until two hours later as it prepared to exit.

“This is fantastic, cutting-edge stuff,” said James Sembrot, senior director of logistics strategy at Anheuser- Busch, “enabling drivers to perform their job in a better, safer, more sustainable manner. We are proud to have partnered with an innovator like Otto and view this as the first step in a long journey.”

“It was treated as a special event,” Hernandez said. “We had vehicles around the vehicle within a safe distance from the vehicle.”

Before the test, the Otto truck was inspected, and the company’s safety compliance record was checked, he said.

Colorado has no law banning tests such as Otto’s, nor is there a law allowing such tests, Hernandez said.

“When I think back in history, I wonder what it felt like when they said we’re going to shoot a rocket to the moon with people on it,” Hernandez told Transport Topics. “I have this gut feeling that this has the potential to be like that from the aspect of how many lives it could save in the future.”

“There are tough questions; I’ll be frank,” he added.

Eventually, autonomous technology could be as accepted as an automatic transmission or cruise control feature “so that it almost becomes standard equipment on a tractor,” Sembrot said during an interview.

The technology also creates the opportunity to relax drivers’ hours-of-service rules, Ron said. A truck that can drive itself and operate around the clock allows drivers to be more rested “for the hours that actually matter, such as complex traffic situations.”

The fuel-related savings would be significant, too, Sembrot said.

That’s “the sweet spot” for Otto’s technology, he added. Switching all the outsourced over-the-road trucks to autonomous driving technology would boost those trucks’ fuel efficiency by 20-35%, which would reduce the fuel surcharges the company pays by $50 million, Sembrot estimated.

The Volvo Class 8 truck was guided by cameras, radar and lidar sensors mounted on the vehicle to “see” the road. Otto’s system controlled the acceleration, braking and steering of the truck to carry the beer exit-to-exit without human intervention.

Otto is discussing similar projects with other partners, Ron said, but he declined to be more specific. “We intend to go deeper and test more loads on more roads under different weather conditions” to accelerate deployment of the technology.

Trucking is a large, complex, exciting and dynamic industry, he said, adding that he is eager to bring some of the “best minds” in Silicon Valley to bear on it and add value for shippers and carriers.

“Commercial transportation is the backbone of our economy, and it is not getting enough technology love and attention. We view that as part of our mission,” Ron said.

Otto is not interested in building trucks, he said, but will collaborate with truck makers to ensure the technology is embedded in new vehicles after it’s commercialized first through aftermarket kits.

For Otto, the trip was a chance to see how its technology performs with a preloaded commercial trailer on actual roads and how Otto blends in with a national shipper’s scale and distribution process, Ron said.

“It was a mutually enjoyable education on both sides,” he said.

Anheuser-Busch Cos. ranks No. 88 on the Transport Topics Top 100 list of the largest private carriers in North America.