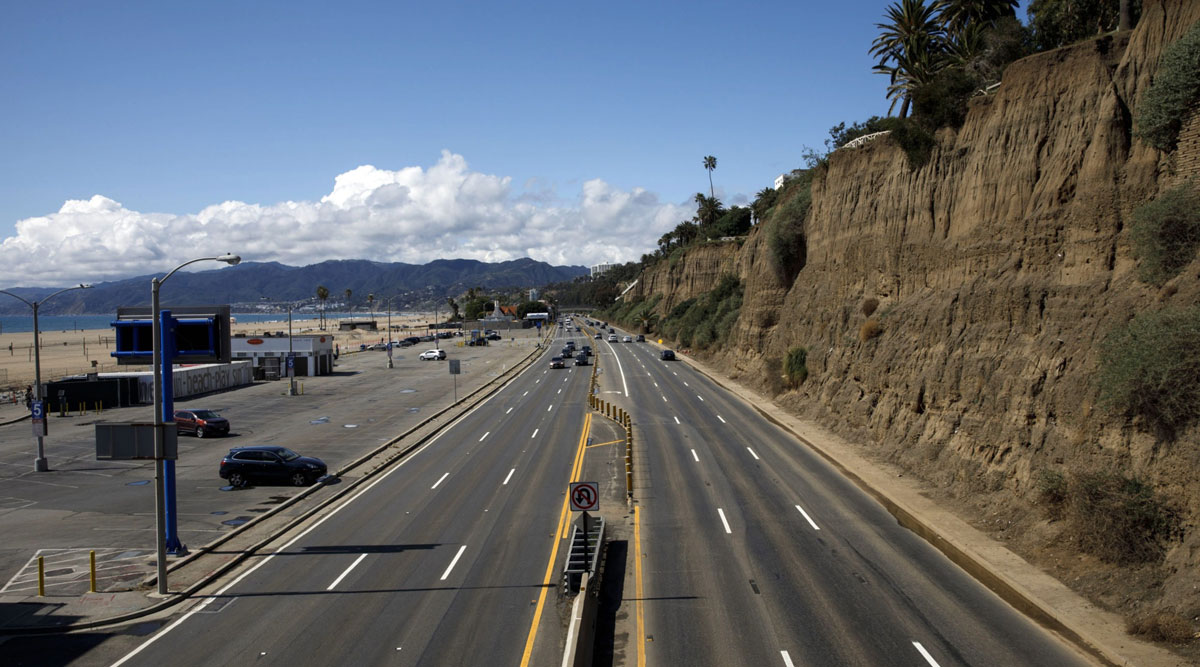 After months of empty roads, lockdowns were easing, and people were getting behind the wheel again. A station in Northern California was selling gasoline for a whopping $5.98 a gallon.

Then the coronavirus struck again — in a fierce way. Californians, Floridians and Texans are back in hiding, and the recovery in driving that had restored highway travel nationwide back to 85% of last year’s levels is looking more fragile than ever.

As lockdowns eased and parts of the world reopened for business, driving emerged as the transportation mode of choice and offered some relief for the oil market just two months off of its worst collapse in history. But the fresh resurgence of the virus in the three states with the country’s biggest gasoline markets is threatening to take American drivers off the road and stymie what has been a remarkable recovery for oil.

Demand has been flatlining over the past few days at fuel stations across the country with concern over the surge in virus cases making it hard to predict what’s to come, according to one major operator of gasoline stations in the U.S. 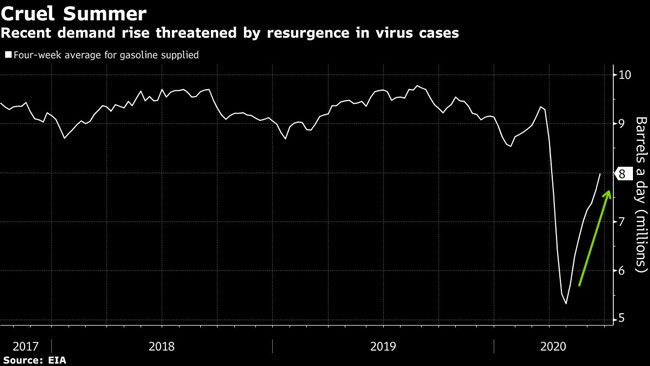 Houston freeways that were starting to jam up earlier in June as businesses reopened and commuters returned to offices have emptied out again. The county declared its highest level of emergency June 26 after area intensive care units reached maximum capacity. Texas Gov. Greg Abbott halted plans to reopen the economy further and is rolling back the opening of bars.

Road congestion was stable at below-normal levels in the U.S. on June 25, according to data compiled by BloombergNEF. Rush hour commutes in Los Angeles last week took about 30% longer than they would have on empty roads, while a year ago, the same drive averaged almost 90% longer that it would have.

Movement over time by geography across retail and recreation, grocery stores, parks and workplaces were markedly down in Florida and Texas as of June 22 compared to a baseline taken from Jan. 3 to Feb. 6, according to data from Google COVID-19 Community Mobility Report. In California, mobility was also well below the baseline in every area but parks, which was 8% higher than the winter.

“Now, we have much lower employment, and many companies are telling people don’t come to work right now,” said Robert Campbell, head of oil products research at Energy Aspects Ltd. “It’s inconceivable that gasoline demand is going to be higher this summer.”

California, Texas and Florida accounted for over 40% of the new virus cases June 24, and Standard Chartered Plc. sees the surge in the top three gasoline-consuming U.S. states weighing on a recovery. Even though the four-week average for gasoline supplied, a demand indicator, climbed for the last eight straight weeks, according to the Energy Information Administration, it is at the lowest level for this time of year since 1996.

“If Florida, California and Texas react to this by issuing shelter-in-place or adding new restrictions on movements, this certainly could be detrimental to gasoline demand,” said Patrick DeHaan, an analyst at GasBuddy. “If you do see a resurgence continue in these states, that’s going to spell doom for demand this summer.”

Gasoline demand in the U.S. fell 2.3% June 27 from the same day the week prior, but is up 3.9% from the same Saturday a month ago, according to data from GasBuddy. Demand is down about 19.1% from the same time last year, though.

The second wave of outbreaks — with 39,907 new COVID-19 cases recorded June 25, exceeding the level of the peak of 36,188 set April 24 — is threatening to keep Americans indoors with popular travel destinations walking back plans to resume operation.

In California, Walt Disney Co. has indefinitely delayed the reopening of its theme parks after previously planning to open in July. Disneyland’s home of Orange County is now showing the fourth-biggest increase of virus cases in the state. The park usually draws about 1.6 million people a month. 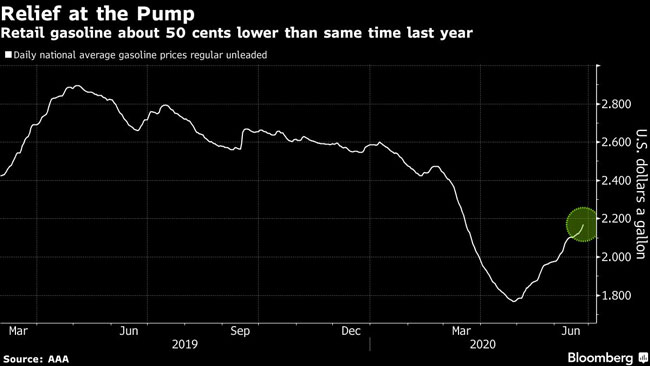 Still, not all Americans have been quick to do away with summer vacation plans entirely, and they’re more likely to drive than fly this summer. Interstate highway miles driven rose 5% in the week ended June 21, according to the U.S. Department of Transportation. But that is still a 15% decrease from a year ago.

Fay Carey, from McPherson, Kan., and her fiancé, plan to drive 450 miles to Yellowstone National Park in a Jeep Cherokee after their wedding in Colorado, opting to skip the airport and potentially packed flights.

“Driving, you just seem so much more in control about who is around us,” she said. “That lends a lot of safety to me.”

And that’s what highway rest stops and fast-food stores are banking on. This year has allowed for more direct competition with retailers at airports for consumers’ travel dollars, said Jon Pertchik, CEO of TravelCenters of America. He envisions families plotting trips like those in the iconic 1980s movie “National Lampoon’s Vacation.”

“People are itching to get out and about in a safe way,” he said. “We are going to see people get out for that Chevy Chase-style road vacation.”

The chain is seeing more recreational vehicles, or “COVID Campers,” this year, Pertchik said. That might also provide a boost to gasoline consumption.

“That’s sort of the perfect vacation during this COVID time, right? It’s literally ‘drive to’ because you drive in on your RV. You don’t have to travel on a plane,” said Nora Creedon, managing director and global head of REITs & Infrastructure at Goldman Sachs.

But road trips are becoming spur of the moment. Auto club AAA says travelers are planning only two to seven days in advance mostly, electing to remain flexible to sudden spikes in virus cases. Plus, gasoline is cheap these days, averaging about $2.18 a gallon at the pump, 54 cents below last year’s levels.

Still, even a low-cost road trip may not be tempting enough to some who are in the high-risk category for contracting the virus or those who are facing financial strains, with nearly 20 million Americans still receiving state jobless benefits.

Jeffrey Bair, Olivia Raimonde and Barbara Powell were the primary contributors to this report.

Most US Oil Job Losses in Pandemic to Remain, Report Says