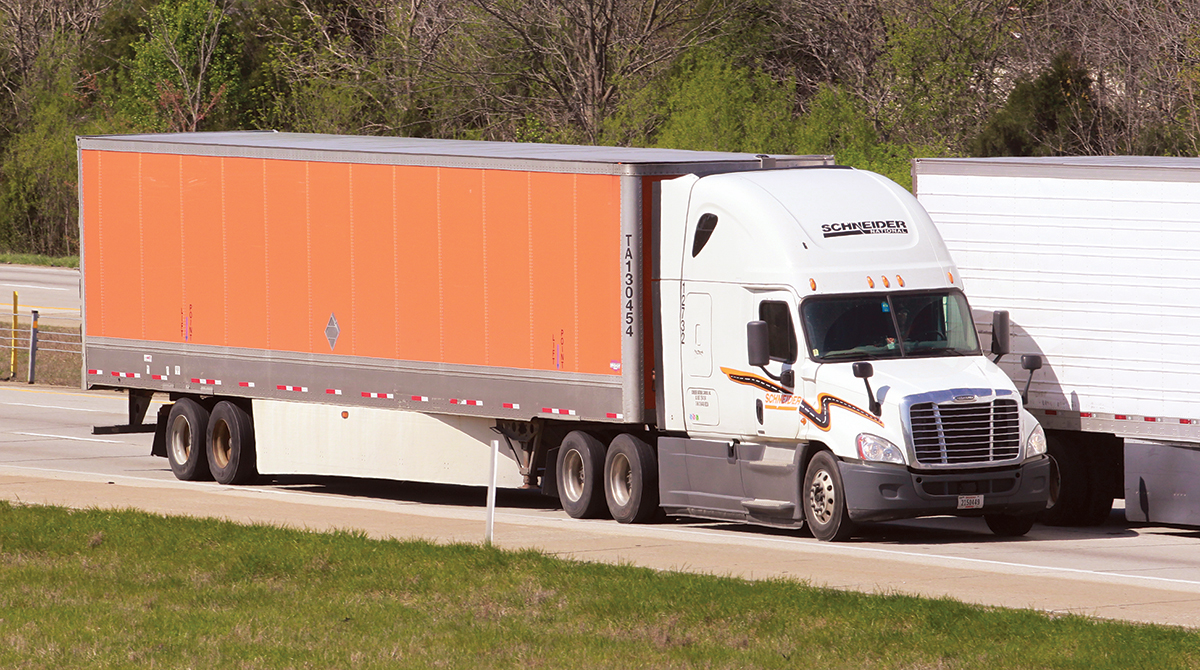 A Schneider truck on the road. (John Sommers II for Transport Topics)

“During the third quarter, recovery of freight volumes accelerated and demand in nearly all geographic markets exceeded capacity,” Schneider CEO Mark Rourke said in a statement. “In our truckload and intermodal segments, operating ratio improved sequentially as a result of increased volume, our targeted yield management actions and our cost management focus.”

Wall Street analysts had been looking for 31 cents per share and quarterly revenue of $1.12 billion, according to Zacks Consensus Estimate.

Rourke noted tight market conditions prevalent during Q3 are expected to continue well beyond Q4 amid strong demand and the persistent driver shortage.

“We believe market demand outpacing aggregate industry supply is a durable condition that will last for multiple quarters,” Rourke said. “We expect solid fundamentals in the fourth quarter of 2020, positioning us well as we enter 2021.”

The company’s truckload segment reported third-quarter revenue decreased 11% to $460.2 million from $515.6 million the previous quarter. This was primarily due to lower capacity levels and the shutdown of Schneider’s First to Final Mile service, it said. Operating income for the segment increased to $45.6 million compared to a loss of $12.5 million the previous year. The previous quarter included restructuring charges of $50.4 million and operating losses of $8.9 million related to the final-mile segment and an $11.5 million tractor impairment.

The intermodal segment saw Q3 revenue reach $248.4 million, a slight decline from $249.2 million during the prior year. Intermodal loads grew 2% compared to the third quarter of 2019. Network demand and fluidity improved as the quarter progressed, but network disruption due to increased customer-driven container dwell times and the availability of third-party drayage capacity impacted volume, Schneider said.

Operating income for the intermodal segment decreased 8% to $23 million from $25.1 million. This was primarily due to continued network disruption and higher use and cost of third-party drayage capacity.

The logistics segment reported Q3 revenue increased 20% to $284.4 million from $236.1 million. This was primarily due to brokerage volume growth and an increase in revenue per order. Operating income for the segment decreased 8% to $9.1 million from $9.9 million.

“In our truckload segment, network volumes were constrained by tight driver capacity, yet sequential revenue growth was achieved in our dedicated operations,” Rourke said. “In our intermodal segment, network balance improved throughout the quarter and further volume growth is expected in the fourth quarter. In our logistics segment, we grew third-quarter revenue 20% year over year and improved revenue per order as the quarter progressed by effectively matching loads with third-party capacity.”

Schneider ranks No. 5 on the Transport Topics Top 100 list of the largest for-hire carriers in North America, and No. 18 on the TT list of the Top 50 logistics companies.