Roger Penske Explores Use of Autonomous Vehicles for His Truck Fleet 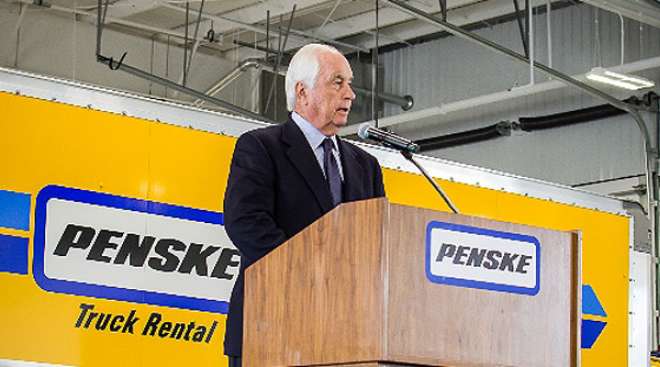 Racing legend Roger Penske once built a whole new engine just to win a single car race. That competitive urge remains strong today, whether it's on the racetrack or delivering FedEx packages through his trucking company.

Speaking May 12 on Belle Isle, Mich., where the Detroit Grand Prix will be run in a few weeks, businessman Penske revealed that he’s exploring the possibilities for autonomous vehicles for his truck-leasing operations and auto dealership business.

Penske’s civic commitments in Detroit — the Grand Prix, the QLINE that he chairs — often overshadow his business operations. But that side of the Penske world is vast.

RELATED: Did Daimler test an 'automated' truck in Oregon? not exactly

Penske Truck Leasing keeps 244,000 trucks on the roads today; it leases fleets to FedEx and other major carriers. And with annual sales of more than $20 billion, Penske Automotive, his network of auto dealerships, remains among the nation’s largest sellers of Toyotas, Hondas and many other brands.

https://t.co/zEZnPtUnX6 Penske explores possibility of a driverless fleet in the near future #penske #detroit #driverlesscars — Driverless Car Inst. (@DriverlessInst) May 15, 2017

FedEx ranks No. 2 on the Transport Topics Top 100 list of the largest U.S. and Canadian for-hire carriers.

Penske revealed May 12 that his truck-leasing operation is looking at “platooning” trucks — running three in a row, with the first and third operated by humans and the middle truck running “driverless,” but with a human ready to take over as needed. Platooning is one of many modes of operating autonomous vehicles being discussed. Penske cited increased productivity as a potential benefit.

“We’re definitely involved [in] looking at that, seeing at how we’ll be involved,” he said. “Car sharing is another area. With 244,000 trucks, we know how to run a big fleet. We might do the same thing with a fleet of cars.”

RELATED: How infrastructure disrepair is holding back autonomous vehicles

Penske said he doesn’t expect to see privately owned, fully self-driving cars dominating the roadways for a long time — “probably not in my lifetime.”

That makes Penske more of a skeptic than a number of automakers, including Ford, General Motors, Nissan and Volvo, which have all said they expect to begin selling fully autonomous vehicles by about 2021.

But fleets of autonomous vehicles, both cars and trucks, offer a lot of opportunities, Penske said.

“We’re already looking at those types of things today, trying to make a difference,” Penske said. “We have to be looking ahead because the world is changing in transportation, and with the size of our company, we need to be at the leading edge.”

One thing Penske doesn’t seem to fret about much is the state of auto sales. Some pundits have predicted that softer sales in recent months mean the record-level sales of the past couple of years are coming to a halt. Penske disagreed.

“For us, our business has been strong,” he said. “We had a record quarter in [the first three months of the year]. It was a little spongy, I’d have to say, maybe in February. But in May, right now the business seems to be good.”

But the market is adjusting, he added, as demand continues to shift from midsize sedans to SUVs and light trucks.

RELATED: Driverless trucks - a seismic shift for the labor force

“There’s going to be more incentives,” he said. “Right now, I think we’re running [incentives] at almost 10% of MSRP, or manufacturer’s suggested retail price, which is a little bit high, and we’ve got a big amount of lease cars coming back. ... That’s going to put some pressure on these prices.”

Despite those factors, Penske suggested sales would remain high by historic standards. “We could do very well with 16 million” vehicles sold, he said, which would be down from the annual pace of more than 17 million annually for the past two years.

Sitting on the tire of a sleek Indy-style race car, Penske dismissed the suggestion that his beloved Grand Prix races might move off Belle Isle, where critics have said the annual races in early June place too great a burden on the island park.

Indeed, even as the impeccably dressed Penske ran through media interviews Friday, May 19, from the pit area of the racetrack, an unidentified protester shouted about the impact on Belle Isle. Security shooed him away.

The Grand Prix’s contract with the City of Detroit to operate the races on the island runs through 2018. Penske called the island the “semipermanent race track” and home to the race event.

He said his aides would start negotiating in the coming months for a renewed lease with the city, which owns the island that is operated by the state under a 30-year lease.

“I think we’ve proven that it’s been a great benefit to the city and the region, with some $45 million worth of economic benefit we bring to the city,” he said. “What about the great TV coverage we get on national television? So from a [public relations] perspective, I think it’s been a home run.”

“What does it do? It showcases the city of Detroit.”

Penske emphasized that there is no Plan B race venue.

“Doing it in the downtown streets of Detroit would never be as good as having it here,” he said. “Let’s add up the plusses and minuses, and we’ll be way ahead.”