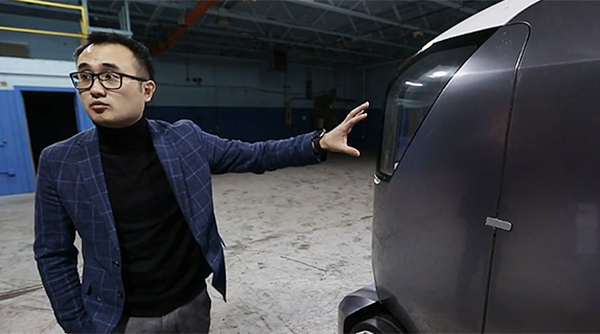 Looking like a delegation of toasters from space, a generation of electrically powered, self-driving mail trucks will roll out of a suburban Detroit industrial park later this year. Their mission: Revolutionize mail and package delivery.

About 2,000 of the boxy, shiny Quadrobot U1 four-wheel-drive, four-wheel-steer delivery vans will begin service with the Chinese postal service late this year, delivering packages in cities along the populous South Coast.

The startup company aims to have another 30 in trial service delivering goods in downtown Detroit and suburban downtowns, including Birmingham and Royal Oak. Quadrobot CEO and Chairman Mike Wang outlined the plans during an interview in the modest Madison Heights building where the company he founded will begin assembling Quadrobots for U.S. service later this year.

A native of Hangzhou, China, Wang came to Detroit to study automotive design at the College for Creative Studies, one of the world’s top schools for auto and industrial design.

“I was skeptical at first, but I’m all in,” said John Manoogian, a longtime auto industry executive and adjunct professor of auto design at CCS. Manoogian met Wang as a CCS student. He’s now a Quadrobot investor and a board member. Quadrobot is based in the Detroit area and funded by investors in the United States and China.

“Mike showed me his prototype and I realized it was a totally unique vision,” Manoogian said. “The car business is undergoing dramatic change. This has the opportunity to make a big difference.”

Most of the U1’s engineering and all its design took place in southeast Michigan. The U1 has 35 kilowatts of power, about 47 horsepower. That’s enough for a neighborhood delivery vehicle, but 350-kw power is in development for bigger vehicles that could go farther and faster. Wang worked with local engineers to develop the vehicles.

“Detroit has the best reputation in the world for automotive engineering and design,” said Wang, 32, who worked in design and brand strategy at Fiat Chrysler after graduating from CCS.

“We wanted the U1 to look like a Detroit vehicle,” Wang said. “There’s a lot of brand value in the city of Detroit.”

The U1 is what’s called a “last-mile” vehicle, designed to handle delivery in neighborhoods and downtowns. The best comparison is the mail truck your postal carrier uses, but smaller, with electric power and varying amounts of self-driving ability. It’s not a substitute for highway and intercity delivery vehicles, but rather for delivery from local businesses — and in China, the local post office.

“Last-mile service is expected to be a viable early laboratory for automated vehicles because these trips often will be on defined and easily mapped routes. There’s also potential for increased efficiency from autonomous delivery and ride-hailing, which at least in theory might help to reduce congestion.”

The U1 has a windshield, driver’s seat and controls. At least the first couple of thousand will be driver-operated as Quadrobot gathers data about how they’re used. An autonomous system will oversee the driver, braking if the U1 enters a turn too fast and steering if the driver makes a wrong turn.

A human attendant will handle package pickup and delivery, but the U1 will be able to autonomously trail its operator down a street or around a parking lot while the person delivers multiple packages.

Delivery will be easier to automate in China, where standardized lockers have replaced individual mailboxes. Wang also foresees using the U1 as a mobile locker for people to drop off objects for pickup. It could also house vending machines, including food that’s freshly cooked and positioned around town or in neighborhoods for easy meal pickup at the end of the day.

Wang foresees some of those stationary uses taking place while the U1 charges its lithium-ion batteries. Quadrobot is working with a supplier on a fast-charge 300-volt system that could deliver a full charge for a 12-hour delivery shift in 40 minutes or so.

Wang worked on the design and brand strategy of the SRT Viper at FCA after graduating from CCS in 2012. He spent a lot of time at FCA’s low-volume Conner Avenue assembly plant in Detroit. That work influenced U1 development, because FCA relied on suppliers to assemble many of the sports car’s modules, the same system Quadrobot uses.

The U1 is modular. The running gear, batteries, electric motors, steering, etc., are packaged in a lower portion that resembles a mattress with wheels. Suppliers will ship those modules to Quadrobot facilities for assembly and attachment to bodies for cargo, vending machines, etc. The modules and body are put together with bolts and glue, making assembly inexpensive and low-cost.

Three assembly facilities in China will employ about 200 people, Wang said. The one planned for Madison Heights should need about 50 by the end of the year. He expects to begin hiring late in the second quarter.

The flexible platform lends itself to making other electric vehicles, including a possible SUV, Wang said. He’s working with the Michigan Economic Development Corp and Detroit Economic Growth Corp. on local development and employment.