A Road Trip With Autonomous Truck Company Plus 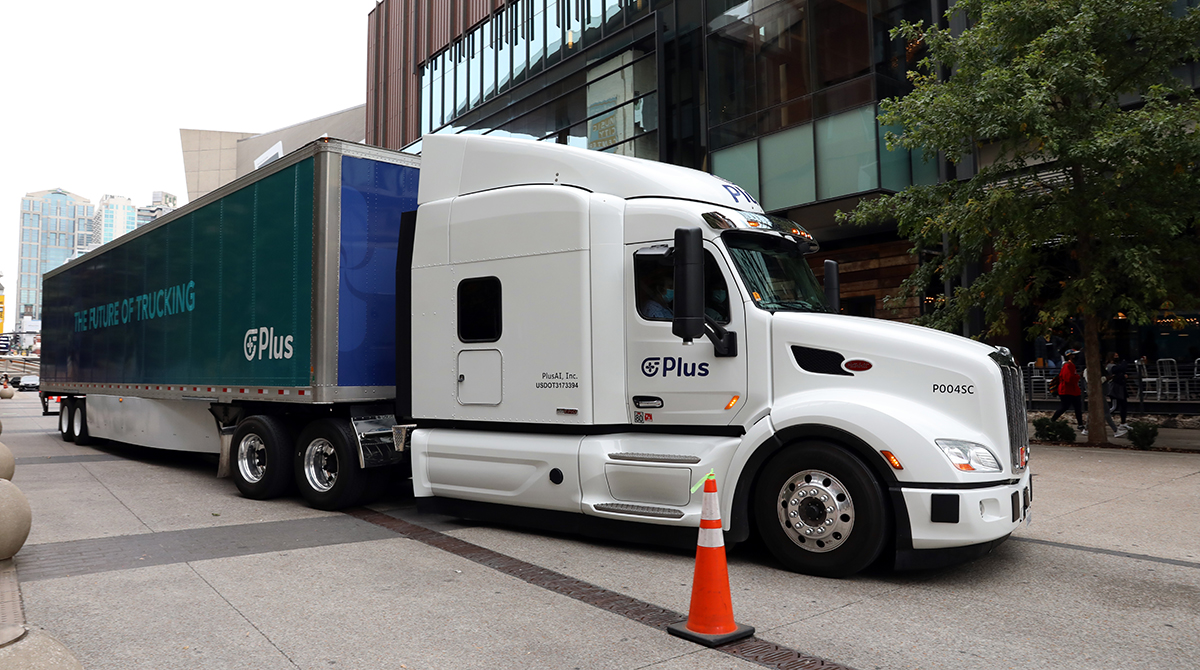 The Plus truck and trailer. (John Sommers II for Transport Topics)

“This PlusDrive system is a driver-assist feature,” Ruben Cardenas, senior vehicle operator at Plus, said of the technology during an hourlong ride in one of its vehicles along streets and highways around the Music City Center, the MCE host venue. “It’s just to help us. It still requires driver engagement going down the road. So, I’m still keeping my hands on the wheel. We’re driving together. It’s a married effort.”

The trip started in downtown Nashville. The truck took about two minutes to start, allowing time for the system to complete a self-diagnostic test. From there, it continues to run software and hardware checks to ensure no problems occur while operational. The system can return control to the human operator if necessary.

“If something is wrong or it doesn’t like what it sees, it’s going to give me four seconds and give me clear, concise instructions to take over,” Cardenas said.

Once out on the highway, Cardenas demonstrated the PlusDrive system’s process for determining when it is safe to engage autonomous operation.

Cardenas switched to autonomous operation once the system detected the truck had merged safely onto the highway. To make that switch, he double-tapped a button on the steering wheel. A switch back to manual driving occurs by pressing the button again while putting pressure back on the pedals. 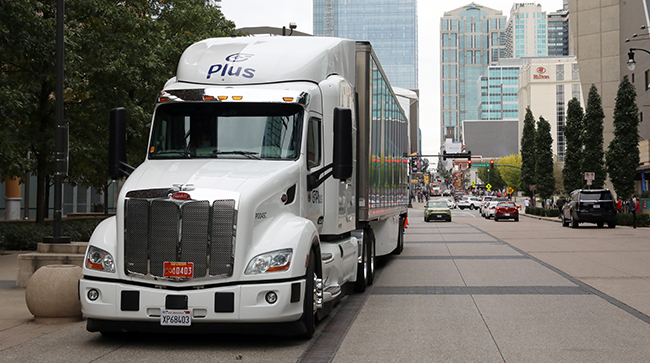 “There’s so much that goes into just this product on a tuning and technology level,” Cardenas said. “We spent a lot of time tuning it, not just to be able to complete the tasks, but how human-like it can complete the task.”

While driving down Interstate 24, the truck hit some traffic and automatically slowed down and sped up. While it can automatically complete a lane change, that occurs when the driver hits the turn signal twice and sensors determine the path is clear.

“You’ll see as we go forward here, we’re going to have a 55 miles an hour [speed limit]. When we get a few miles down the road the speed is going to change to 65,” Cardenas said. “It will acknowledge that and increase the speed.”

Cardenas also pointed to a small screen to the side of the steering wheel which acts as the main human-machine interface. It shows throttle values, current speed alongside target speed and fuel algorithms. It also features a display that shows what the sensors are seeing, including surrounding vehicles appearing as white silhouettes against a black background.

“All of those things working in conjunction together to control what needs to be done,” Cardenas said, noting what was on the screen. “It’s detecting the motorcycle right here on the human-machine interface. So, we have him. That’s our lead right now, our target, but we don’t just focus on just our target. We’re scanning everything.”

The human-machine interface shows the right and left adjacent lanes, and boils down what they detect into information that is easily understood by the driver at a glance.

“It’s going to do what it needs to do to take us through this traffic,” Cardenas said. “It’s going to keep a nice distance in front of us. It’s going to allow merging to come in, people to get off, maintain the flow of traffic. It’s also going to work in our benefit for fuel efficiency.”

Cardenas also pointed out ways in which the system requires user engagement; for example, by ensuring the driver has hands on the wheel by detecting and checking there is at least a slight amount of torque being applied to the wheel. Ensuring a driver is present even when the truck is driving itself helps to reinforce safety, Cardenas said.

“We have a torque-based steering and it’s going to detect zero torque or negative torque,” Cardenas said. “I’ve got some input going on a very small, sensitive level. So not enough to make the truck swerve. But it knows my hands are there.”

The system will sound an alert if it doesn’t detect a driver after 15 seconds, and issue a more intense alarm and verbal warning after 30 seconds. If it still doesn’t detect a driver, the truck will then start to slowly brake. The driver can clear the alarms by applying some torque to the steering wheel or pressing a button on it, Cardenas said.