Productivity Falls for a Second Quarter 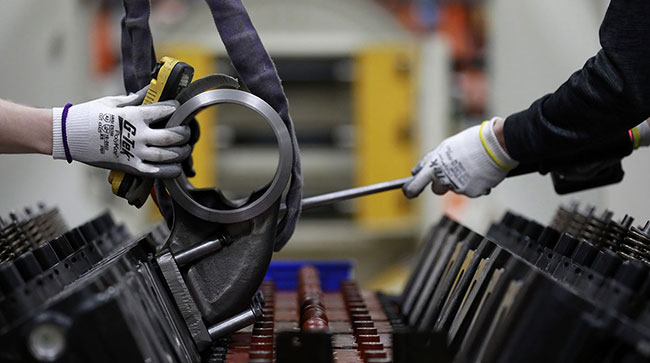 Workers assemble components on a diesel engine at the Cummins Seymour Engine Plant in Seymour, Ind., on April 18. (Luke Sharrett/Bloomberg)

Productivity slumped for a second straight quarter as the economy shrank, driving another surge in labor costs that risks keeping inflation elevated and further complicates the Federal Reserve’s efforts to tame price increases.

Productivity, or nonfarm business employee output per hour, decreased at a 4.6% annual rate in the second quarter after falling at a 7.4% pace in the previous three months, Labor Department figures showed Aug. 9.

That marked the weakest back-to-back readings in data to 1947. On a year-over-year basis, output per hour fell by the most on record.

With the drop in productivity, unit labor costs jumped at a 10.8% rate in the second quarter from the prior three months. The increase from a year earlier was the biggest since 1982.

Labor costs are the biggest expense for many businesses, so firms often adopt new technologies and upgrade equipment to make their workers more productive, helping blunt the inflationary impact of higher wages.

The unemployment rate has fallen back to its pre-pandemic level of 3.5% — matching a five-decade low — and job openings outnumber the unemployed by nearly 2 to 1. The competition for workers has fueled a jump in wages across industries, especially among lower-income workers. While hourly compensation advanced in the quarter, it fell 4.4% on an inflation-adjusted basis.

But the jobs market is a bright spot in an otherwise darkening economic picture. Decades-high inflation has weighed on consumer spending and prompted aggressive monetary policy action by the Fed to curb it.

Data out Aug. 10 is expected to show a gauge of consumer price inflation decelerated in July amid falling gasoline costs. Stripping out food and energy, annual inflation likely accelerated, underscoring the breadth of price pressures in the economy.

While productivity growth rates can be extremely volatile in normal business cycles, the pandemic and subsequent recovery over the past two years has made the figures even more prone to big fluctuations.

It will likely take some time to establish the underlying trend in productivity in the wake of the pandemic, but if it has permanently downshifted, there could be lasting repercussions for the well-being of the economy in the long run.

Nonfarm business output as measured by this report, which is about 75% of gross domestic product, dropped 2.1%. The economy, as measured by GDP, shrank for a second-straight quarter as decades-high inflation undercut consumer spending and Fed interest-rate hikes stymied businesses and housing.

Hours worked, the other input in productivity calculations, climbed 2.6%. That was half the pace of the previous quarter.

— With assistance from Olivia Rockeman and Maria Paula Mijares Torres.