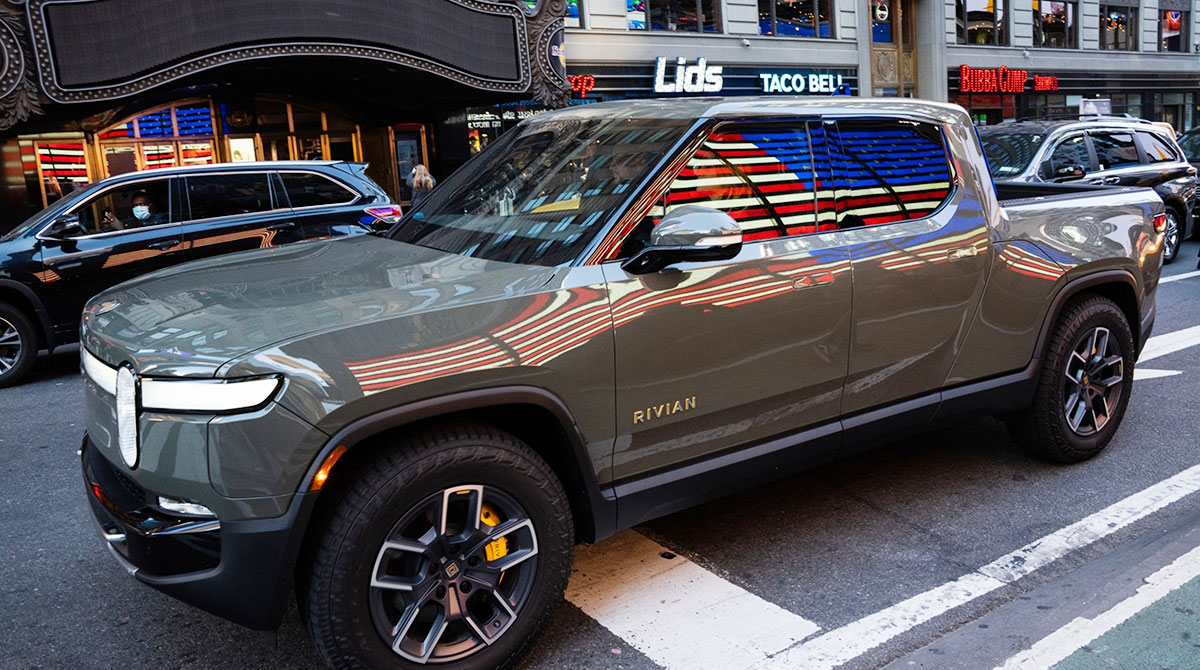 A Rivian R1T electric pickup truck during the company's IPO outside the Nasdaq MarketSite in New York, on Nov. 10. (Bing Guan/Bloomberg)

Fresh off a $12 billion initial public offering, Rivian Automotive Inc. is investing in a dizzying array of expansion projects and actively pursuing a site for a stand-alone battery factory in addition to a pair of new vehicle-assembly plants already planned.

The ambitious to-do list for the electric-vehicle maker will be funded in part by its IPO — the sixth-largest IPO in U.S. history. Rivian shares soared 22% on Nov. 11 in their second day of trading, creating a stock market value of more than $100 billion. Two months after delivering its first pickups, largely to employees, Rivian now has a market valuation exceeding General Motors Co.

The top investment priority is a second U.S. EV manufacturing facility, according to people familiar with the matter, followed by a plant in Europe that would start building vehicles by the end of 2023. A site in the U.K. has been under consideration, along with other locations in continental Europe, the people said, asking not to be named discussing private information. The cost of the Europe factory would be in the billions of dollars, they said.

Arizona, Michigan and Texas are among the states under consideration for the battery manufacturing site, some of the people said. Irvine, Calif.-based Rivian currently assembles battery packs using cells from Samsung SDI Co. at its existing Normal, Ill., vehicle-assembly factory where the automaker builds its R1T pickup.

No final decision has been made on any of the sites, the people said. New candidates for the second EV assembly plant in the U.S. have also emerged in recent weeks, some of the people said. Many states are vying for new battery plants as the auto industry shifts toward electrified vehicle lineups. Ford Motor Co. announced plans in September to spend $11.4 billion in Kentucky and Tennessee to build three battery factories and an EV facility.

The investments add some flesh to Rivian’s bare-bones plans outlined in previous statements, filings and news reports. The company had held talks with the city of Forth Worth, Texas, to invest $5 billion in a electric-vehicle assembly plant, Bloomberg News reported in August. In an Oct. 1 filing, Rivian disclosed its long-term ambitions about growing in-house expertise in battery cell production without saying that it included a stand-alone facility.

In an interview with Bloomberg Television on Nov. 10, CEO RJ Scaringe declined to comment on the status of Rivian’s talks in Texas and in Europe, which he called “potential locations.”

“These are really important decisions” Scaringe said. “For us it really comes down to looking at the ability to recruit an outstanding team to help drive and operate these facilities.” Also important, he said, is access to its suppliers and logistic considerations for delivery of components.

Whatever the outcome, Rivian plans to spend heavily to boost its production capacity. The company said in a Nov. 5 regulatory filing it expects capital expenditures of about $8 billion through the end of 2023. Rivian forecast a ramp-up in annual production to 200,000 units by that time and says it will be supply-constrained until new plants come online.

Rivian’s taking a page straight out of EV-market leader Tesla Inc.’s playbook. Elon Musk’s company went through a similar growth story in recent years. It invested heavily in a new plant in Shanghai that now accounts for the majority of its EVs output. Later this year, Tesla intends to started limited production at two other new factories in Austin, Texas, and Berlin.

In Europe, Rivian would initially seek to build battery-electric delivery vans ordered by Amazon.com Inc., one of its top strategic investors, and later start manufacturing its retail consumer-focused EVs, Bloomberg reported in February. Ahead of Rivian’s IPO this week, Amazon disclosed a 20% ownership interest in the automaker.

$10 Billion Rivian IPO Would Be Seventh-Largest on Record