Ports on Both Coasts Report Volume Surge in October 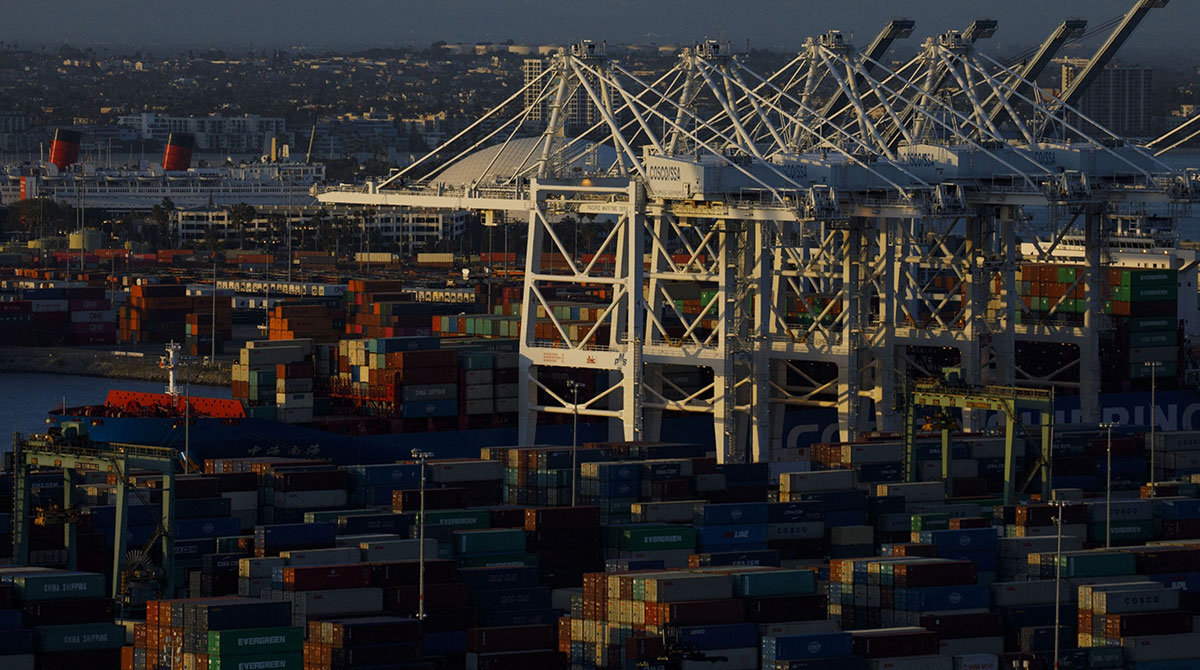 The Port of Los Angeles on May 1. (Patrick T. Fallon/Bloomberg)

With a surge in imports, the nation’s ports are reporting record or near-record activity as warehouses and stores restock eight-plus months into the COVID-19 pandemic.

The global outbreak caused massive economic disruption in the second quarter, only to be followed by record growth beginning in the summer and carrying into the fall.

Port of Los Angeles, the nation’s largest, reported on Nov. 18 that it processed 980,729 20-foot-equivalent units in October, an 18% year-over-year increase from 770,289 TEUs. It also marked the port’s best month in its history.

Propelled by replenishment of inventories and retailers preparing for upcoming holidays, October marked the busiest month in the Port of Los Angeles' 114-year history. Year to date, overall cargo volumes lag by 5.3% compared to 2019. https://t.co/nNiCbP58Bg pic.twitter.com/mnjvU9FB47

“Marine terminals are getting squeezed from both sides. Vessels are coming in very full and at a faster pace, and they’re also looking to turn back to Asia as quickly as possible,” port Executive Director Gene Seroka told reporters. “We see trucking and railroad resources that are stretched thin and local warehouses that are at, or near capacity.”

Seroka predicts container numbers will remain exceptionally strong through February. The adjacent Port of Long Beach also reported a record in October as workers processed 806,603 TEUs, up 17.2% from a year ago. The volume represents the first time in the port’s history it has topped 800,000 containers and compares with 688,425 TEUs handled in the 2019 period.

“The peak holiday shipping season is supporting our ongoing recovery and record highs, but we are now facing a new wave of COVID-19 cases spreading across the country and remain locked in a trade dispute with China,” Long Beach Executive Director Mario Cordero said. “We are optimistic about the gradual economic recovery while bracing for any shocks still to come.”

IHS Markit transportation economist Paul Bingham told Transport Topics there is a fundamental reason for the surge at ports, especially on the West Coast.

“The single biggest factor is the huge shift in consumers, households in the United States shifting their consumption from services toward goods. … A tremendous percentage are being bought through e-commerce,” he said. “We’ve seen a remarkable rebound from the depths of the second quarter. We’ve been playing catch-up.”

The Port of Oakland reported a 5.8% year-over-year increase in container volume, moving 216,686 units in October, compared with 204,880 in 2019. Imports were strong, jumping 10.4% when measured against the previous year.

“Peak season is here, and we’re seeing retailers stocking up on as much product as possible,” Port of Oakland Maritime Director Bryan Brandes said.

The only West Coast port to report a year-over-year decrease was the Northwest Seaport Alliance, which operates facilities in Seattle and Tacoma, Wash. Those ports moved 296,892 TEUs in October, down 4.2% compared with 310,066 containers a year earlier. Officials said imports were up 4.7% when measured against 2019’s numbers, but a 19% drop in exports pushed the total TEU volume down.

October’s total TEU volume also marked a 2.7% increase from 2019 and a 7% rise from September. The port has seen monthly growth for five consecutive months.

American Association of Port Authorities President Chris Connor told TT the TEU numbers on both coasts are impressive. Still, the ports are spending much more to handle cargo because of the increased costs of protecting port workers with personal protective equipment.

“Clearly, there has been a replenishment on consumer goods, particularly out of Asia,” he said. “But there have been millions and millions of dollars poured into the health of safety of the workers at the ports.”

In late August, AAPA announced it was seeking $1.5 billion in grants from Congress to help the nation’s seaports maintain operations and cover debt operations during the pandemic. Congress has not yet acted on that request.

The South Carolina Port Authority processed 216,196 TEUs in October, and it was only the second time in 2020 the port cleared 200,000. The port’s 2020 volume is just a shade below the 217,360 units moved in October 2019. The port also has seen an 18% fiscal-year increase in vehicles being shipped in and out of the facility. South Carolina is home to several auto manufacturing plants, including BMW, Volvo and several military equipment manufacturers.

The Port Authority of New York and New Jersey and the Port of Savannah, Ga., had not reported container volume numbers at press time.

AAPA’s Connor said 2020 has been a roller-coaster year and that he and his colleagues are pleased with the increases.

“The ports have had an exceptional couple of months,” he said. “It’s good news, but it should not be interpreted as ‘Happy Days are Here Again.’ ”