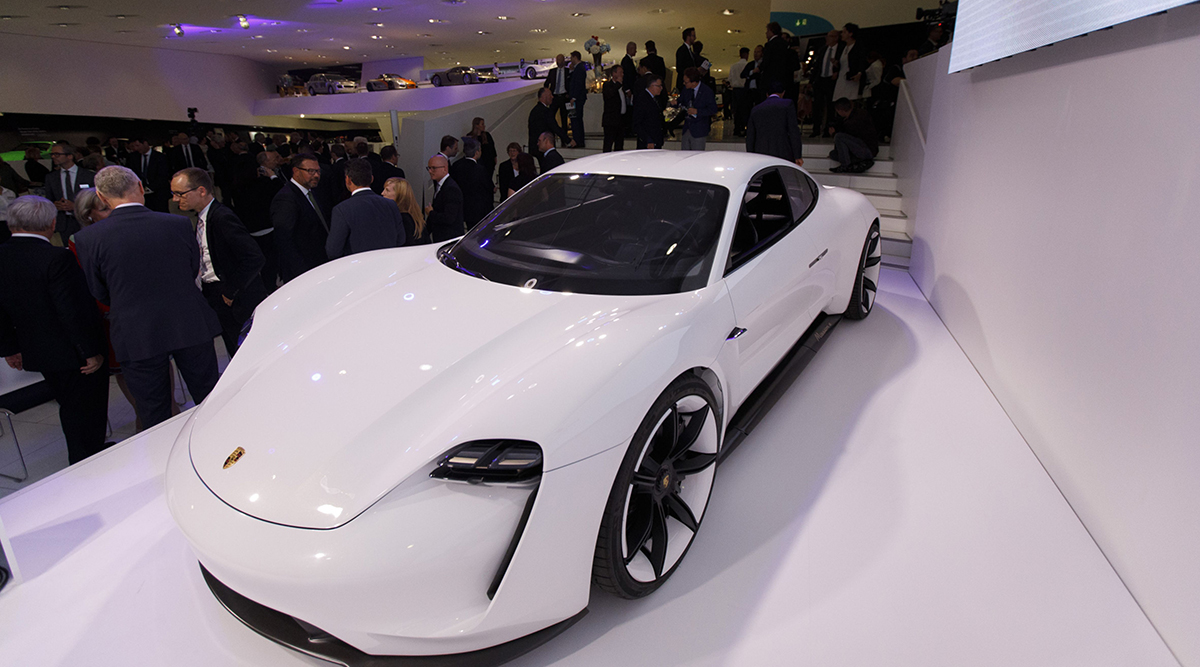 After a bumpy start for sister brand Audi’s e-Tron, the Taycan, with the top Turbo S version priced at $185,000, is for the time being the flag-carrier in VW’s massive drive to unseat e-car pioneer Tesla Inc. The wraps came off Wednesday at simultaneous events in its three biggest markets, with Porsche — known for churning out roaring sports cars — presenting the vehicle bathed in a backdrop of sustainable-power imagery.

“It’s a true Porsche,” the brand’s CEO, Oliver Blume, said at the German leg of the event that unveiled a white version of the sedan. “But it’s different than anything we built in the past 70 years. Porsche is positioning itself for a sustainable future.”

Despite all its engineering muscle as the world’s largest automaker, VW has struggled to slow Tesla’s march. The debut of the e-Tron, a challenger to the Model X sport-utility vehicle, was marred by delays and a recall. Tesla chief Elon Musk has meanwhile stretched downmarket with the lower-priced Model 3, which started selling in Europe this year and is about to begin production in China.

Like Tesla with the Model 3, Porsche is rolling out higher-priced versions of the Taycan first, starting with Turbo S and the $150,900 Turbo. The base version of the car is expected to be priced below $100,000, and a Gran Turismo derivative will start sales at the end of next year.

The car will generate a “good margin” starting with the top-end versions, Blume said in an interview with Bloomberg TV. Returns won’t be as high as for other models “but this is a start for e-mobility.”

The Taycan, boasting technical superlatives such as ultra-fast charging, and the mass-market VW ID.3 will be on display at next week’s Frankfurt, Germany, auto show, and is slated to start production later this year, leading VW’s more than 30 billion euro ($33 billion) push to produce battery-powered cars across all price segments. It’s a plan the German manufacturer can ill-afford to see falter.

The Taycan “is a turning point for Porsche and the industry as it raises the technical bar for electric vehicles beyond Tesla,” Bloomberg Intelligence analyst Michael Dean wrote in a report. The Taycan should “be profitable from launch given Porsche’s proven pricing power, albeit at vastly reduced margins as compared with gas-powered models.”

At last count, the sleek car had attracted about 30,000 deposits. The car is partly financed by a 1 billion euro ($1.1 billion) green Schuldschein promissory note, the first for a carmaker. It may quickly outsell the iconic 911 that has led Porsche’s appeal among the world’s wealthy for decades. Half of deliveries will be all-electric or hybrid by 2025, Blume said. 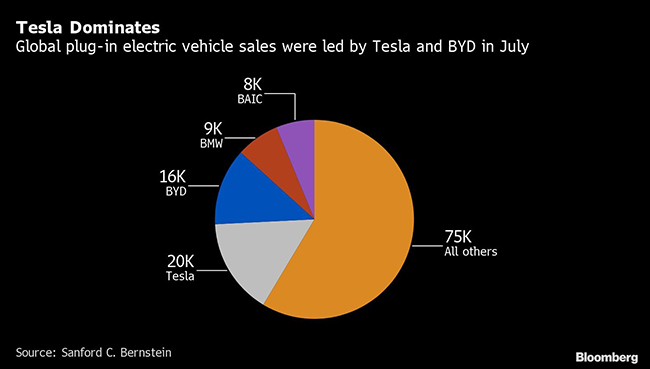 The technologically refined car will go head-to-head with Tesla’s aging Model S, after Mercedes-Benz, Jaguar and Audi opted for SUVs to kickstart their electric-car offerings. Tesla is facing concerns over whether it can deliver sustainable profits amid waning demand for its older models while sales rise for the cheaper Model 3.

“Model S and X volumes have plummeted in the last two quarters and have been a huge drag on Tesla’s recent financials,” Sanford Bernstein analyst Toni Sacconaghi said in a note. He counted a number of potential factors, including cannibalization from the Model 3, aging product design and new competition.

The jury also is out on whether Porsche can generate acceptable returns on cars designed to keep the manufacturer’s healthy margins ticking over in the shift to tighter emission rules. It enters the fray in rude health as VW’s most profitable brand.

Demand for the Cayenne SUV helped to lift sales by 2% in the first half despite a slowing market. Maintaining healthy operating returns — at 16.5% during the first six months — is key to funding VW’s unprecedented shift into the new era.

The Stuttgart, Germany-based manufacturer picked the three Taycan event locations to showcase sources of green energy: Niagara Falls in North America for hydro power, a solar farm outside of Berlin and a wind farm in China near the city of Fuzhou. While automakers gradually move toward battery-powered cars, the energy used to charge them often still comes from nonrenewable sources like coal plants.

Porsche has seen promising sales of plug-in hybrid versions of existing models like the Panamera four-door coupe, with over half of customers in Europe going for partially emissions-free options. To ease concerns over going fully electric, the carmaker is installing fast chargers at dealerships in the U.S. and Europe.

VW also is participating in Ionity, which is rolling out a network of high-speed charging points across European highways. The Taycan can recharge 100 kilometers (62 miles) in four minutes and has a total range of 450 kilometers. That compares with a reach of 610 kilometers for the Model S 100D fitted with the biggest battery.

High-tech goodies include a horizontal touchscreen that stretches all the way to the passenger side, with a separate control panel. The infotainment integrates Apple Music software that lets drivers capture a song on the radio and add it to their playlist. (Android-phone owners are out of luck — Porsche’s infotainment system only works with Apple.)