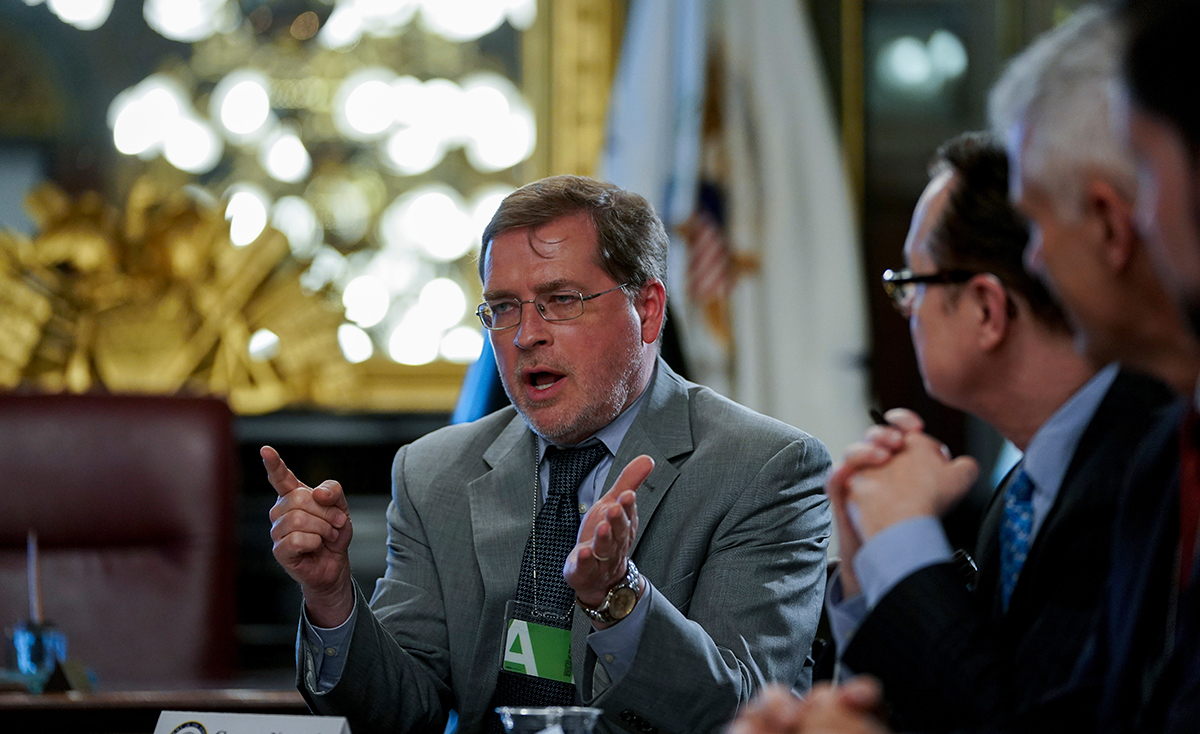 Norquist has chimed in as an opponent of increasing fuel taxes. (Andrew Harnik/Bloomberg News)

A recent Quinnipiac University poll found people are near evenly split on the subject of raising fuel taxes to fund infrastructure projects, with a slight majority supporting the idea.

Published Feb. 20, the poll found 46% of respondents say an increase would be a “good idea,” while 44% hold an opposing view. Asked which party would better manage funding for infrastructure projects, 43% chose Democrats while 42% picked Republicans.

I’m for Trump on this one. I think if he continues the drumbeat, we have a shot at raising the gas tax.

Business executives, engineers and most of the freight industry welcomed the president’s call.

“Because it is a user fee, the fuel tax is the most conservative, cost-effective and viable solution to making that vision a reality,” American Trucking Associations President Chris Spear said in reaction to word of Trump’s support for the increase. “Ninety-nine cents of every dollar goes directly to road and bridge maintenance, and it doesn’t add a penny to the deficit.”

A proposal by ATA, called the Build America Fund, would be capable of generating about $340 billion over 10 years through a 20-cents-per-gallon built-in fee on transportation fuels, according to the group’s estimates.

The American Society of Civil Engineers, which last year gave the country’s infrastructure an overall grade of D+, has been urging lawmakers to approve a 25-cent fuel tax increase. The U.S. Chamber of Commerce has a similar proposal.

Support from Trump on the fuel tax will be paramount for persuading congressional leaders to advance a multiyear infrastructure bill ahead of the midterm elections. Legislative calendars on Capitol Hill often freeze shortly before elections.

“I’m for Trump on this one,” former Transportation Secretary Ray LaHood said on CNBC Feb. 21. “I think he’s way ahead of the curve. I think if he continues the drumbeat, we have a shot at raising the gas tax.”

Because it is a user fee, the fuel tax is the most conservative, cost-effective and viable solution to making that vision a reality.

Some conservative groups, however, are pushing back on the idea. Grover Norquist, president of Americans for Tax Reform, a group influential among Republicans, claimed higher gas prices would hinder middle-class families by erasing whatever financial benefits they would realize from the recently enacted tax law. Norquist targets lawmakers who raise taxes.

“Raising the gas tax will directly undermine these gains and would predominantly fall on middle- and low-income American families,” Norquist wrote in a Feb. 21 letter to the Republican leaders in Congress and the chairmen of the tax-writing committees. “Instead of increasing taxes on consumers, Congress should prioritize cutting wasteful spending.”

Environment and Public Works Committee Chairman John Barrasso (R-Wyo.) also was unenthusiastic. “I don’t like it, but others do,” he told Fox Business Feb. 15. Barrasso also serves as chairman of the Republican Policy Committee.

His colleague, Sen. James Inhofe (R-Okla.), former chairman of the EPW committee, said fuel-tax proponents, such as Carper, had engaged in “wishful thinking” by suggesting Trump had endorsed an increase.

At the first press briefing since Trump’s reported support, White House press secretary Sarah Sanders did not comment about the 25-cents-per-gallon increase. But, as principal deputy press secretary Raj Shah said on Fox Business Feb. 16, the White House is not ruling out any “specific proposal.”

“If we’re going to work with Congress honestly and in good faith, we’re not going to rule out all of their ideas,” Shah added.

“The president is leading a thoughtful discussion on the right way to solve our nation’s infrastructure problems,” the official said, noting the administration’s focus on their infrastructure proposal’s “principles.”

Those principles include earmarking $200 billion in federal funding to drive $1.3 trillion in nonfederal funds over 10 years. Also, the proposal would provide $50 billion for rural projects and bring the construction permitting process to two years.

The 18.4-cents-per-gallon gas tax and the 24.4-cents-per-gallon tax on diesel fuel set in 1993 are struggling to meet the demands of the Highway Trust Fund, an Eisenhower-era account that assists states with maintenance and construction projects.

“The user fee was last raised in 1993 and since then its ability to pay for needed improvements to our aging roads and bridges has been cut in half. Right now, poor infrastructure costs the average American roughly $1,500 a year, versus the $2 per week they would pay under our Build America Fund proposal,” said Sean McNally, vice president of public affairs and press secretary at ATA. “The cost of doing nothing is too high.”