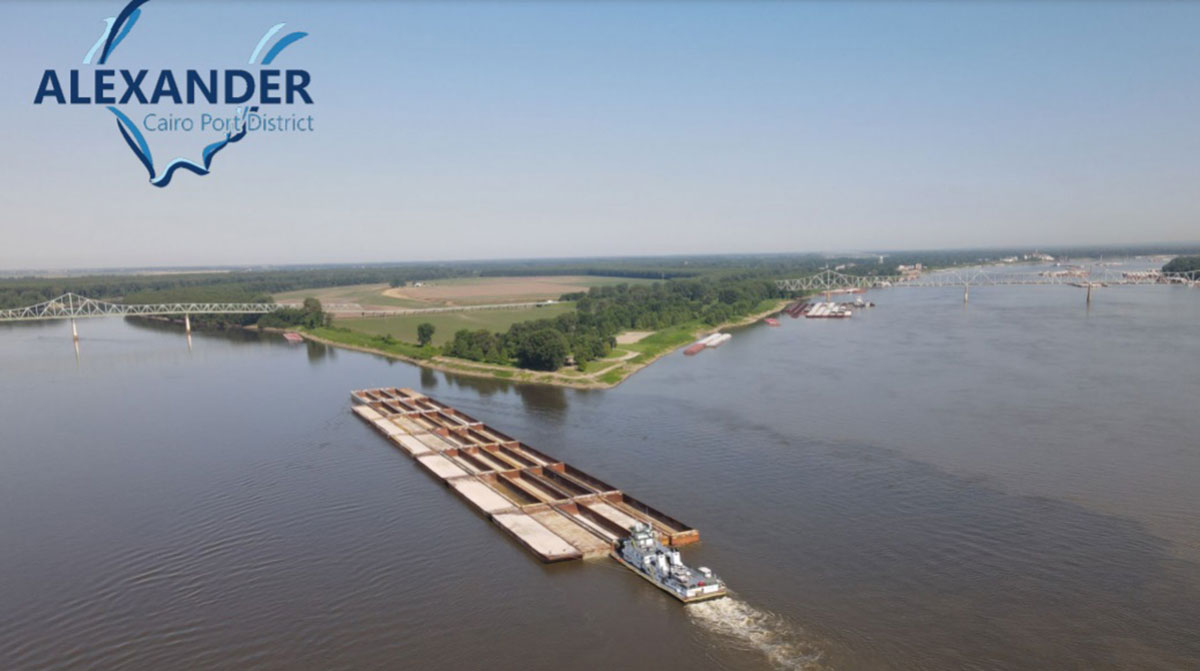 Plans are for construction to start next year, with port operations commencing in 2024. (Alexander-Cairo Port District)

After at least 10 years of planning, officials in Cairo, Ill., say the timing is right to finally develop the estimated $300 million Alexander-Cairo Port District. The port would be at the confluence of the Ohio and Mississippi rivers.

During an Oct. 5 video presentation with developers, local government leaders and other officials, plans were presented to begin construction next year and possibly start operations in 2024.

“We do have a strategy we’ll be executing on early in 2022,” said port consultant Todd Ely, who has been working on the project for a decade. “We’ll be working with various state agencies and trade associations and individual companies that have already expressed interest in using the port for the export of their products.”

The plan calls for building a large landing facility on the Mississippi River, 5 miles upstream from the confluence with the Ohio River. Large cranes would lift the cargo containers off barges or other vessels that journey up the Mississippi from New Orleans or south from the nation’s agriculture heartland.

“We know that the Corps of Engineers has approved the deepening of the lower Mississippi, allowing much bigger vessels up into the Mississippi, upwards of 50 to 75 miles from its current configuration,” port design consultant John Vickerman said. “So what’s happening here is we’re changing the very character of the inland waterway system.”

In July 2020, the Army Corps of Engineers signed off to deepen the lower Mississippi River from 45 to 50 feet. The extra 5 feet will allow larger ships access to Louisiana ports at Baton Rouge, New Orleans, South Louisiana, St. Bernard and Plaquemines, which Cairo officials said makes the timing perfect with their project.

“Every port and every terminal of the more than 35 terminals on the Mississippi, and many on the Ohio, on the Illinois and the Missouri side, are now and will be shortly 50 to 75 miles closer to open ocean,” Vickerman added. “Their ability to move export product down the Mississippi and effectively transfer to large ocean vessels is upon us.”

Cairo’s waterfront location played an essential role during the Civil War. Union Gen. Ulysses S. Grant chose the site to build Fort Defiance, which was used as a staging area to launch raids into Confederate territory in Tennessee, Kentucky and Missouri.

Port district officials say much of the required infrastructure to build a multimillion-dollar port is in place with Interstate 57 nearby, two state highways, bridges over the two rivers, and Class I railroad Canadian National having track that runs through the city.

Officials believe shipping agricultural commodities will be a large part of the port’s business. Seven of the nation’s top 10 states for soybean production are either on the Mississippi River or within one day’s driving distance for the trucking industry: Illinois, Iowa, Minnesota, Indiana, Missouri, Ohio and Arkansas. Seven of the top 10 states for corn production also are easily accessible by truck: Iowa, Illinois, Minnesota, Indiana, Ohio, Missouri and Wisconsin.

Port district officials said those figures and the likelihood of increased export growth encourage them to move forward.

“As the port develops, and the business model becomes a bit more clear, we’ll be looking forward to offering them proposals and prices, and we’re confident we’re going to get quite a bit of their business,” Ely said.

Besides soybean and corn, officials believe other commodities, including coal, coiled steel, scrap metal, agricultural fertilizer, biofuels and wind energy equipment, would likely be moved from the port.

As far as the port’s structure, it is being proposed as a public-private partnership with the Alexander-Cairo Port Authority, a governing body that includes officials from the city of Cairo, Alexander County and the Cairo Public Utility Co., which owns the land where the port would be built, and a private port operator.

Besides the economic need for such a facility, the port proposal got a boost in 2019 when Illinois Gov. J.B. Pritzker and the Illinois General Assembly reached an agreement on a spending bill for infrastructure projects. Some $40 million was designated for the Alexander-Cairo Port District.

The project still needs final permits from the state and federal governments, including the Corps of Engineers, but officials say they are confident those will be obtained in time for a late-2022 construction start. It is estimated the project will generate $300 million in private investment, creating hundreds of construction-related jobs and other permanent positions in the transportation field once the port is operating.

This is not the first time Cairo’s waterfront location has played an essential role. During the Civil War, Union Gen. Ulysses S. Grant and soldiers built Fort Defiance, which was used as a staging area to launch raids into Confederate territory in Tennessee, Kentucky and Missouri.

Ports on Both Coasts Continue Record-Setting Levels in May