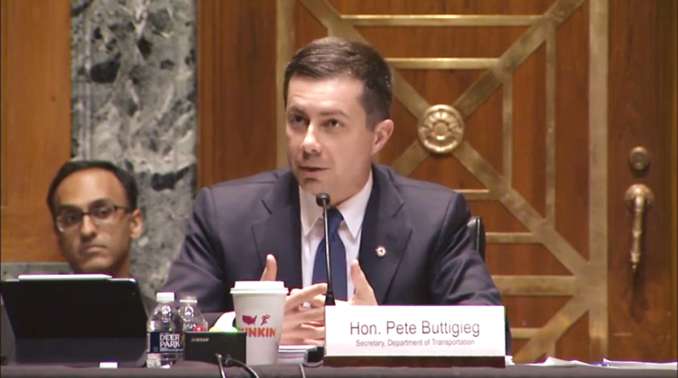 Buttigieg speaks at the hearing about the administration's efforts. (Senate Committee on Appropriations via Youtube)

The country’s top transportation officer called on Senate funding leaders to approve the White House’s fiscal 2023 budget, one he said aims to modernize passenger and freight corridors with the goal of enhancing the economy.

For the U.S. Department of Transportation, the White House is calling on congressional funding leaders to approve $142 billion for fiscal 2023.

“The department is now in a much stronger position to help build the transportation future the American people need and deserve: One that is safer, more efficient, and more affordable for everyone, from families transporting kids to businesses moving goods,” the secretary said.

The request calls on Congress to approve $23.6 billion for aviation modernization, $4.45 billion for major transit projects, $3 billion for safety programs at the Federal Highway Administration, $1.5 billion for infrastructure construction grants and $230 million for port projects.

As the secretary put it, “At the department we understand that the tremendous opportunity we’ve been given to help modernize our country’s infrastructure comes with a profound responsibility to use taxpayer dollars efficiently and wisely, and to make resources more accessible to state and local governments so they can build good projects.”

Buttigieg suggested the budget request would complement funding approved in the recently enacted $1 trillion Infrastructure Investment and Jobs Act, commonly referred to as the bipartisan infrastructure law. That law dedicated more than $500 billion for highway-centric projects with a focus on severe weather resilience.

For the Federal Motor Carrier Safety Administration’s safety operations and programs the request calls for $367.5 million. For the agency’s safety grants division it proposes $506.1 million. 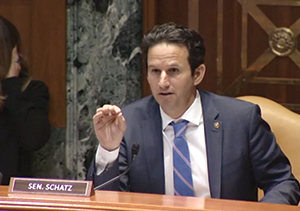 Schatz points to the need for sustainability and resilience. (Senate Committee on Appropriations via Youtube)

“FMCSA’s fiscal year 2023 budget, in concert with the bipartisan infrastructure law, will set the stage for forward-facing investments to address current realities and future visions for interstate commerce, [commercial motor vehicles] operations, and driver safety,” according to background the department provided. “The [fiscal-year] 2023 budget request prioritizes safety as the foundation of everything we do, while also helping the economy recover and rebuild from the COVID-19 pandemic, responding to the threat of climate change, implementing [bipartisan infrastructure law], and ensuring transportation is an engine for equity.”

Senate Democratic funding leaders, expected to debate a transportation spending bill in the coming months, mostly praised the president’s request for the U.S. Department of Transportation. Sen. Brian Schatz (D-Hawaii), the subcommittee’s chairman, touted the emphasis on sustainability and resilience.

“I’m glad to see a sustained focus on addressing climate change,” he said. “It continues to build on the nation’s electric vehicle infrastructure and it advances research into alternative aviation fuels and stronger fuel economy standards which would reduce carbon emissions by 2.5 billion metric tons.” 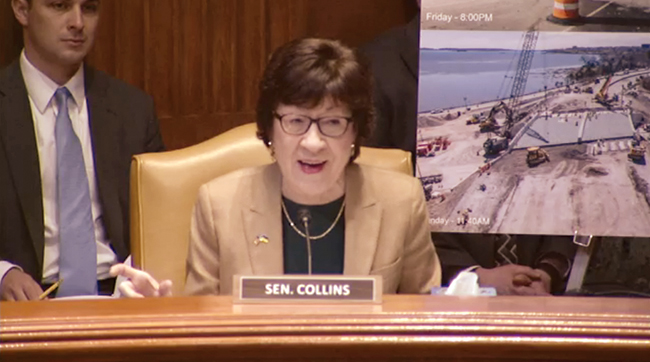 Collins emphasizes the need for states' flexibility. (Senate Committee on Appropriations via Youtube)

Current appropriations for DOT and most of the federal government expires at the end of September. Congressional leaders have yet to announce a timeline for considering fiscal 2023 funding legislation.