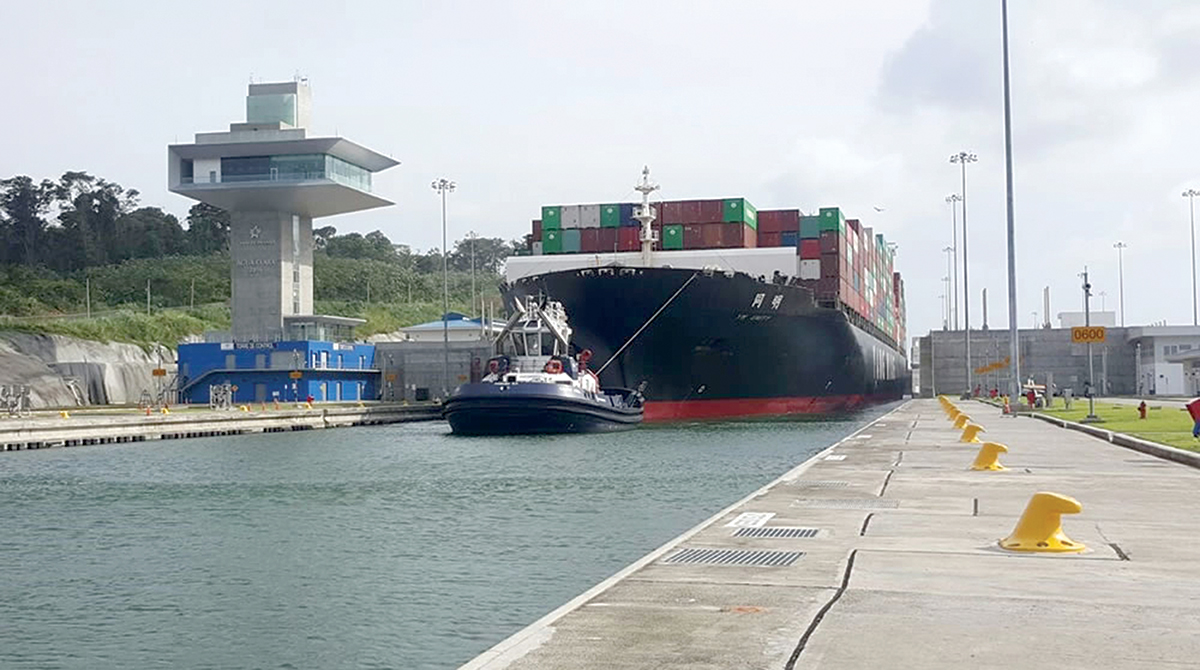 When the $5.5 billion expansion of the Panama Canal opened on June 26, 2016, dignitaries from around the world and 25,000 Panamanians lined the banks of the canal. But on the first anniversary, it was pretty much a working day.

Five NeoPanamax vessels — ships too long, too wide and too heavy to fit through the locks of the original canal — transited through the new locks on June 26. The largest was Hapag Lloyd’s Valparaiso Express. With a capacity of more than 13,000 TEUs (the equivalent of standard 20-foot long containers), the ship can carry more than 2 1/2 times the cargo of vessels using the original canal, which was built more than 100 years ago.

Each of the five transiting vessels received a commemorative plaque, but there wasn’t the fanfare and fireworks of last year when the expansion — seven years under construction and two years behind schedule — finally opened.

“These transits are a testament to the global maritime industry’s confidence in the expanded canal,” said Panama Canal Administrator Jorge Quijano on the anniversary.

In a telephone interview with the Miami Herald, he reviewed the first year of the canal expansion, a massive project that included state-of-the art locks on both the Atlantic and Pacific sides of the canal, a new 3.8 mile access channel, and widening and deepening at various locations along the 50-mile long canal.

In the first year, ships transiting the expansion have carried nearly 25 million more tons of cargo than anticipated, and from the beginning of the fiscal year last Oct. 1 through May, tonnage is up 22.2%, Quijano said. Revenue is also up.

This year, low world oil prices have presented a challenge for the canal. With crude oil trading in the $42-$46 per barrel range, some shipping lines that aren’t in a hurry are opting for longer routes around the Cape of Good Hope at the tip of South America on return voyages rather than choosing to pay canal fees, Quijano said.

To remedy that, the Panama Canal Authority has proposed offering more attractive rates for container ships on return voyages. That and other proposed changes in the authority’s toll structure is the subject of a hearing scheduled July 5 in Panama City.

The competing Suez Canal has already cut its tolls by 65%, Quijano said.

Over the past year, the canal expansion has achieved several milestones:

• The largest ship to ever transit the canal passed through the expansion on May 24. The container ship OOCL France, which is as long as the Eiffel Tower and has a capacity of 13,926 TEUs, crossed from the Pacific to the Atlantic en route to U.S. East Coast ports.

• On April 29, the first cruise ship to use the expanded canal transited from the Atlantic to the Pacific. Disney Cruise Line’s 2,713-passenger Wonder was on a repositioning cruise from Port Canaveral to Alaska where it is cruising this summer.

With the addition of a tail on a large Donald Duck figure, the length of the ship grew to 984 feet, making it too long to fit through the locks of the original canal, Quijano said. The original locks can only accommodate ships no more than 965 feet in length and 106 feet wide with a capacity of 5,000 TEUs. The new locks can handle ships up to 1,200 feet long and 160 feet wide with a capacity of around 13,000 TEUs.

Other cruise lines continue to offer itineraries through the original canal, Quijano said, but during the coming winter season, more cruise traffic is expected through the canal expansion.

• Development of the liquefied natural gas trade. Tankers from the Sabine Pass LNG terminal on the border between Texas and Louisiana have been transiting the canal en route to Asia, the west coast of South America, and the Pacific Coast of Mexico. Trinidad and Tobago is also exporting LNG and sending it through the canal.

“Since last year, we have had transits by 140 LNG vessels. This is a totally new trade for the canal,” Quijano said.

Operating the expansion has been a learning experience.

Unlike the original canal, tugboats enter the locks with ships and guide them through their transits. When the expansion first opened, not all tugboat captains had been fully trained in the new procedures.

About a month after the opening, the Zin Fei Zhou, a Chinese container ship, struck a lock wall, denting and tearing small holes in its hull and forcing repairs before the ship could resume its journey. “This was the only major problem we had during the whole year. Vessels are getting through without issues,” Quijano said. “We’re now more proficient in transits.”

In subsequent months buffering fenders along the locks’ walls have sometimes fallen off or been damaged.

“It’s not uncommon for vessels to rest against the fenders. It’s a normal situation,” Quijano said. “We’ve been changing and trying different fendering systems. Now we’re on our seventh prototype. I don’t think this is an issue anymore.”

While work on the expansion proceeded in Panama, a parallel project was underway at PortMiami: dredging and widening shipping channels from 42 feet to 50 to 52 feet and making other improvements to accommodate the bigger vessels now traversing the expanded canal.

Since PortMiami finished its deep-dredge project in October 2015, it has received 156 deep-draft vessels. On Wednesdays and Thursdays PortMiami receives Neopanamax ships that have transited the Panama Canal, and in September, the Alliance PA-2 will resume calls at the port using 6,700-TEU vessels that have traveled through the canal.

Because the canal expansion was completed when many customers of the shipping lines hadn’t fully recovered from the 2008-2009 global economic crisis, these days many Neopanamax ships aren’t fully loaded. “The demand for cargo isn’t there,” Quijano said. “Now most ships going north are only 75 to 80% full. But I’m confident in the next couple years the world economy will pick up, and the ships will be full.”

Because these lightly-loaded Neopanamax ships might only draft 42 to 43 feet, they can still call at some ports where deepening and widening projects haven’t yet been completed, giving them a bit of breathing room to complete dredging while world commerce recovers.

While there are no plans to expand the canal further to handle the ever bigger ships that the world’s shipyards are building, Quijano said that the option of a fourth set of locks is under study: “Demand will dictate when they will be built. But for that we will need more water, and we’ll have to look for another reservoir. We have a team working on a concept, but that doesn’t mean it’s going to start anytime soon.”

Even though the largest container ship in the world has a capacity of 21,413 TEUs, Quijano said that 95%-96% of the world’s container fleet can fit through the expanded canal and that’s good enough for now.

US Retail Cargo Seen Cooling in Second Half as Inflation, Rates Bite