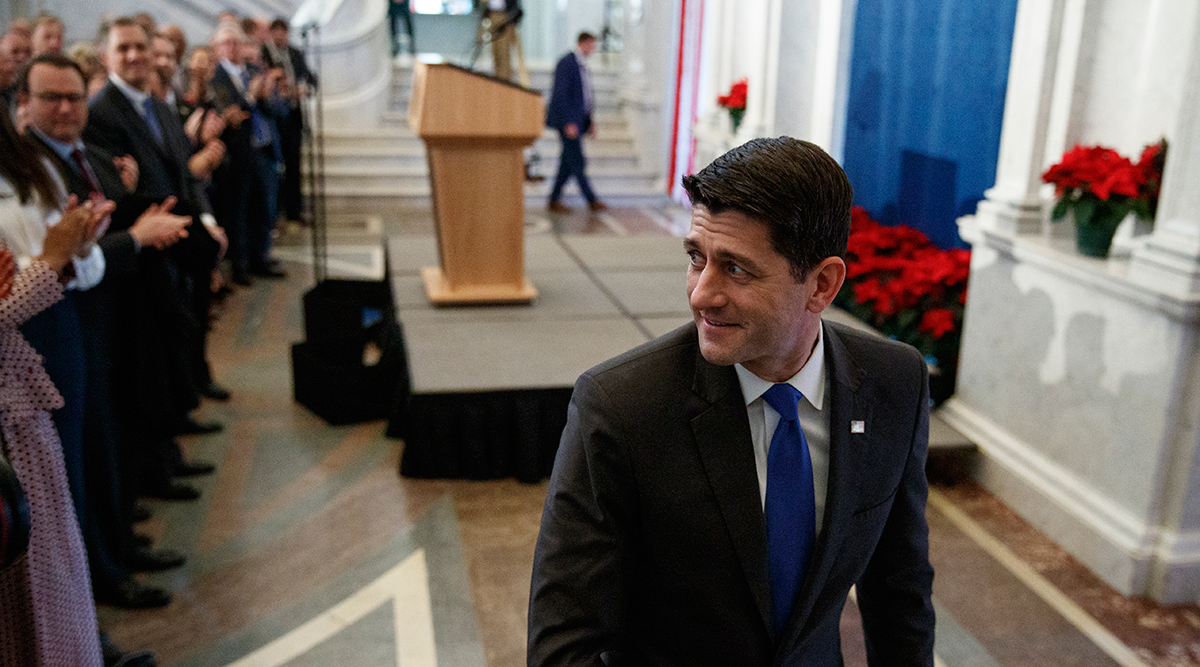 In a farewell address Dec. 19 to the nation that highlighted ongoing concerns over immigration and celebrated the passage of legislation about tax and energy policies, the outgoing Republican leader of the House of Representatives did not mention transportation-centric bills that had advanced during his tenure.

Retiring Speaker Paul Ryan (R-Wis.) touted his party’s legislative record in front of colleagues and supporters at the Library of Congress. Absent from those legislative accomplishments, however, were any mentions about the passage of a multiyear surface transportation measure in 2015, a recent aviation policy reauthorization, water infrastructure and pipeline safety bills and the appropriation of grants for big-ticket infrastructure projects.

He also emphasized the passage in 2017 of a tax policy overhaul was a crowning achievement for Republicans who for decades had sought to modernize the tax code.

"We all struggle. We’re all fighting some battle in our lives. So, why do we insist on fighting one another so bitterly” - Speaker Ryan https://t.co/nlQIHUByUO

As he readies to leave the speakership behind in the final days of the 115th Congress and move on to his next job, Ryan acknowledged that left undone is identifying a path forward to assist individuals escape poverty, reform federal entitlement programs and improve immigration policies.

While transportation leaders from his party continue to pursue a long-term source of funding for the national freight and commuter networks, Ryan did not raise it during his address.

Nor did he specify his plans once he gives up the speaker’s gavel. His party lost control of the chamber in this year’s midterm elections, paving the way for House Democratic Leader Nancy Pelosi of California to succeed him in January.

“We’re again locked in another short-term battle over one aspect of this issue, and no matter what the outcome is in the coming days, the larger problem will remain,” Ryan said about immigration. “The system will be in need of serious reform.”

The country’s state of politics frustrated the outgoing speaker in recent years, and he blamed partisan animus for Congress’ inability to tackle a larger portfolio of major reforms. Yet, he expressed optimism that policymakers eventually would resolve ideological differences.

“We all struggle. We’re all fighting some battle in our lives. So, why do we insist on fighting one another so bitterly,” Ryan noted. “Our complex problems are absolutely solvable. That is to say, our problems are solvable if our politics will allow it.”

Tapped for vice president as Republican Mitt Romney’s running mate in 2012, Ryan succeeded Speaker John Boehner (R-Ohio) in 2015. Prior to that, he was chairman of the tax-policy Ways and Means Committee. During a hearing he held on the Highway Trust Fund in 2015, Ryan made clear his opposition to raising fuel taxes as a way to ensuring the fund’s solvency.

“It’s going to be difficult to reach consensus on a permanent solution,” Ryan said. “We are not going to raise the gas tax.”

Revenue from the 24.4-cents-per-gallon diesel tax and 18.4-cents-per-gallon gas tax that back the trust fund will be insufficient to cover upcoming commitments. Transportation stakeholders have urged Ryan and other congressional leaders to increase and index fuel taxes to address the fund’s looming shortfall.

The U.S. Department of Transportation uses the account to assist states with maintenance and construction projects. In 2017, the American Society of Civil Engineers issued a D+ grade for the country’s overall infrastructure.