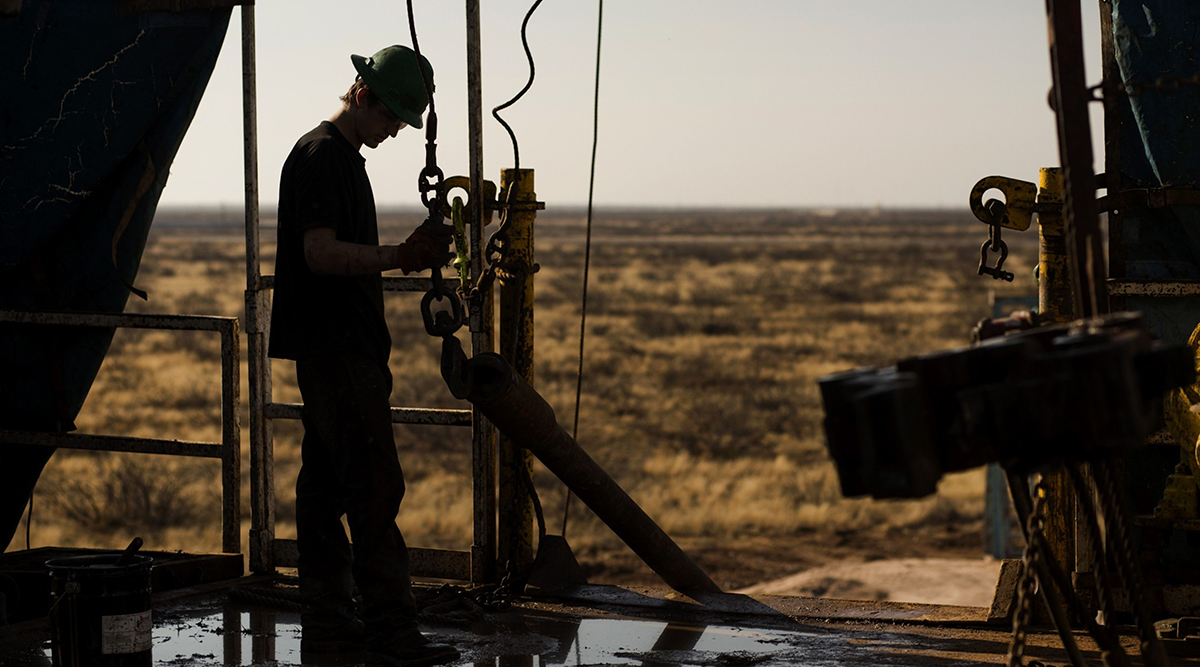 A worker in the Permian basin outside of Midland, Texas. (Brittany Sowacke/Bloomberg News)

Oil rose the most in nearly two weeks, tracking a move in stronger equities, as economic data from the U.S. to Europe and Asia signaled a flicker of life in languishing demand.

U.S. manufacturing expanded in July at the fastest pace since March 2019, while factories across Europe posted their first expansion in 1½ years. In China, a private gauge showed the country’s factory activity grew at a faster pace in July than at any point since January 2011. Equities strengthened with the S&P 500 Index rising as much as nearly 1%.

“If economic activity continues to strengthen, that subsequently will lead to higher demand, and that’s going to be supportive for the market,” said Gene McGillian, vice president of market research at Tradition Energy. 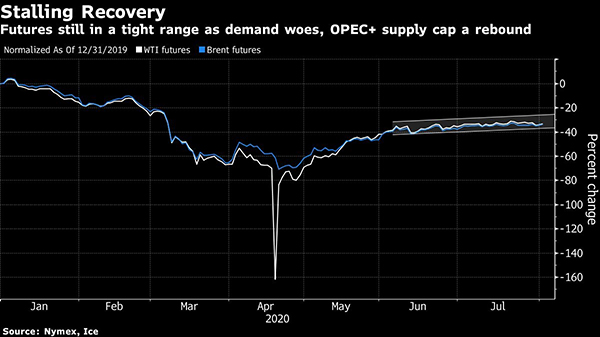 Yet the deal between the Organization of Petroleum Exporting Countries and its allies to ease production cuts this month is keeping oil prices from rallying higher. The group and its partners will pump about 1.5 million barrels a day more in August than in July. Russia already lifted its production slightly last month.

Crude futures are still struggling to rebound significantly above $40 a barrel in the wake of a gloomy demand outlook with global coronavirus cases topping 18 million.

There’s growing evidence that the recovery in oil demand is running out of steam, according to JPMorgan Chase & Co. analysts. With travel indicators appearing to have stalled, there’s a chance global oil consumption could find a new normal at about 90 million barrels a day, according to the report, down from about 100 million previously.

Marathon Petroleum Corp. has seen weaker gasoline demand in the Southwest the past few weeks with the resurgence of COVID-19, executives said during an earnings call Aug. 3.

“The infection rates are going up in a lot of different places in the United States again, renewing the worries about petroleum demand as more restrictions get put on,” which is weighing on the market, said John Kilduff, a partner at Again Capital.

West Texas Intermediate for September delivery rose 74 cents to settle at $41.01 a barrel. Brent for October settlement added 63 cents to end the session at $44.15 a barrel.

A fresh shot of stimulus in the U.S. may improve the demand outlook, but Democrats and Republicans remain at an impasse over a virus relief bill. President Donald Trump said Aug. 3 he may take executive action to impose a moratorium on evictions with talks on a new virus relief plan stalled in Congress. The White House is also exploring whether the president can act on his own to extend enhanced unemployment insurance payments.

“The stimulus package is stalled at the moment, but there’s a sense in the market that something will come through sooner rather than later,” Kilduff said.