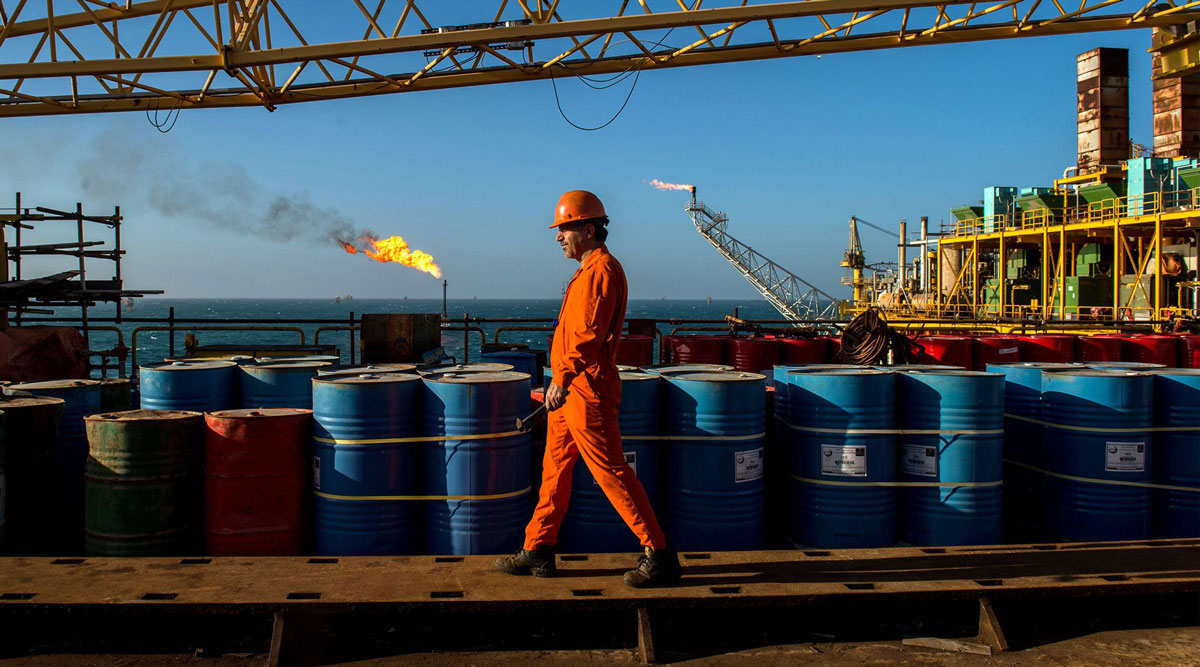 An oil worker on an offshore platform in early 2017. (Ali Mohammadi/Bloomberg News)

Oil surged the most ever in New York as the U.S. president said he could get involved in the standoff between Saudi Arabia and Russia that has rocked crude markets.

U.S. futures rose 24% on March 19, the most since trading began in 1983. Prices are still down almost 60% this year, with the slide accelerating following a failed OPEC+ meeting in early March, after which major producers pledged to pump more in a battle for market share just as the coronavirus crisis crushes demand.

U.S. President Donald Trump said he was searching for “medium ground” in the impasse.

“Trump getting involved was bound to happen with the existential threat to the oil industry,” said Walter Zimmermann, chief technical strategist at ICAP Technical Analysis. “This rebound may not have a future though unless Saudi and Russia stop digging their heels in.”

Earlier, the U.S. said it would kick off its commitment to fill its Strategic Petroleum Reserve by buying 30 million barrels of American oil.

Signs of stress due to the oil crash are also being revealed in the Middle East and other parts of the world. Canadian oil is at a record low, and some North Sea fields are becoming uneconomic.

Meanwhile, policymakers across the globe are trying to strengthen economies against the impact of the coronavirus pandemic. The European Central Bank has unleashed an emergency bond-buying program, and the U.S. Senate cleared the second major bill responding to the outbreak in an attempt to kick-start the economy.

Countries are ramping up measures as the global spread of the virus continues to gather pace with the number of confirmed cases in Europe now exceeding China. Italy’s death count has surged to almost 3,000, while the U.K. imposed tighter controls on movement of people including closing all schools.

The Saudis ordered state-run Aramco to keep output at a record high of 12.3 million barrels a day over the coming months. But in a surprise move March 19, both the kingdom and Iraq cut the rebates on freight costs they give to customers, effectively lifting prices.

Despite the prospect of the U.S. intervening in Riyadh and Moscow’s price battle, fears of severe virus-induced demand destruction loom. “I don’t think this is over yet,” said Bart Melek, head of commodity strategy at TD Securities. “Even if the Saudis cut here, it doesn’t matter much. We still have some very bad demand numbers because of COVID-19. Demand could fall 10 to 11 million barrels a day.”

The higher supply is increasingly taking its toll on the oil market’s structure. Brent’s six-month timespread went to its most bearish since 2009, indicating a big glut. As a result, traders are eyeing lucrative opportunities from storing oil on tankers and hoping to sell it at a profit later.

With crude’s price weakness getting more entrenched, traders are increasingly trying to assess the impact on U.S. production this year. On March 19, a barrel of Permian oil was cheaper than a meal at a steakhouse in the region’s Midland heartland, a sign that producers are struggling to cover their operating costs.