Oil Dips Below $65 on OPEC Inaction 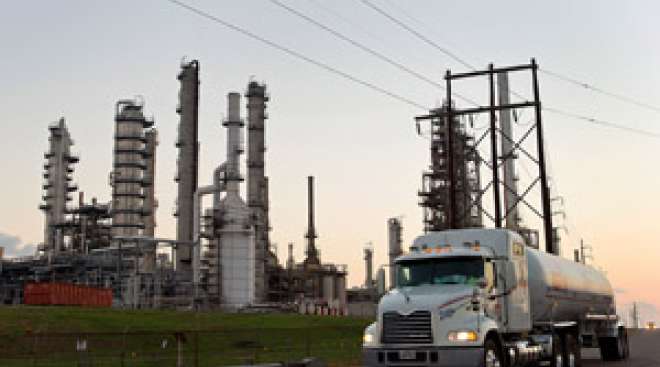 West Texas Intermediate crude rebounded after sliding to the lowest level since July 2009 on speculation that prices have further to drop before OPEC’s decision to maintain output slows U.S. shale supply.

Benchmark futures in New York and London slumped as much as 3.7% before recouping losses. Both grades had their biggest monthly loss in November in almost six years after the Organization of Petroleum Exporting Countries signaled it will leave it to the market to reduce a global glut.

Oil has collapsed into a bear market as the U.S. pumps crude at the fastest rate in three decades while global demand growth slows. OPEC resisted calls from members including Venezuela and Iran to reduce its production target of 30 million barrels a day when it met last week in Vienna. Iraq boosted exports to 2.51 million barrels a day in November, according to the oil ministry.

“The failure of last week’s OPEC meeting has had a tremendous impact,” John Kilduff, a partner at Again Capital, a New York-based hedge fund that focuses on energy, said by phone. “Prices have fallen a great deal, which is going to bring the value buyers out of the woodwork.”

Many of OPEC’s 12 members intended to trim 1.5 million barrels, or 5%, from their collective quota, with non-member producers contributing an additional 500,000 barrels in reductions, according to Zanganeh’s account of the group’s Nov. 27 meeting. Saudi Arabian Oil Minister Ali Al-Naimi cited the threat from U.S. shale as the main justification for maintaining the output limit, Zanganeh said.

“It will be interesting to see if Iran, Venezuela and maybe some non-OPEC countries like Russia can get it together make some cuts,” Michael Lynch, president of Strategic Energy and Economic Research in Winchester, Massachusetts, said by phone. “The Saudis have decided to squeeze the shale producers, so they won’t be taking part.”

The U.S. oil boom has been driven by a combination of horizontal drilling and hydraulic fracturing, which has unlocked supplies from shale formations including the Bakken in North Dakota and the Eagle Ford in Texas. The technique is typically more expensive than pumping from conventional reservoirs.

About 4% of U.S. shale output needs $80 a barrel or more to be profitable, according to the International Energy Agency. Most production in the Bakken formation, one of the main drivers of shale oil output, remains commercially viable at or below $42, the Paris-based IEA estimates. It expects U.S. supply to rise by almost 1 million barrels a day next year, with increasing flows to international markets.

“The bottom line is that we have to hold here,” Stephen Schork, president of Schork Group Inc. in Villanova, Pennsylvania, said by phone. “We’re at key levels for both U.S. shale and Canadian production. There’s no telling what the impact will be if there’s a further drop.”

U.S. production expanded to 9.08 million barrels a day through Nov. 21, the most in weekly records that started in January 1983, data from the Energy Information Administration show. Crude inventories climbed to 383 million, according to the Energy Department’s statistical arm.

OPEC, which supplies about 40% of the world’s oil, exceeded its official target for a sixth straight month in November, even after reducing output. The group pumped 30.56 million barrels a day, 424,000 barrels a day less than in October, a Bloomberg News survey of oil companies, producers and analysts showed. Iraq increased monthly exports by 2% in November, according to Asim Jihad, a ministry spokesman.

“The market is in panicking mode,” Hans van Cleef, energy economist at ABN Amro Bank NV in Amsterdam, said by phone. “We expect it will bottom out and see an upward correction. Lower oil prices are a stimulant for economic growth, which means extra demand.”

Crude prices have dropped below the level needed by ten OPEC member states to balance their budgets, according to data compiled by Bloomberg.

China’s efforts to boost emergency stockpiles may increase imports by as much as 700,000 barrels a day in 2015, according to Energy Aspects Ltd., a London-based consultant. That’s more than half the global glut forecast by Citigroup Inc.

“The Chinese are sure to buy these cheap barrels to fill their strategic stockpiles,” Kilduff said.

Hedge funds and other financial traders increased bullish bets on Brent crude in the days before the OPEC meeting. Money managers’ net wagers on rising prices rose 7.9% to 65,973 contracts in the week ended Nov. 25, according to figures from the ICE Futures Europe exchange.