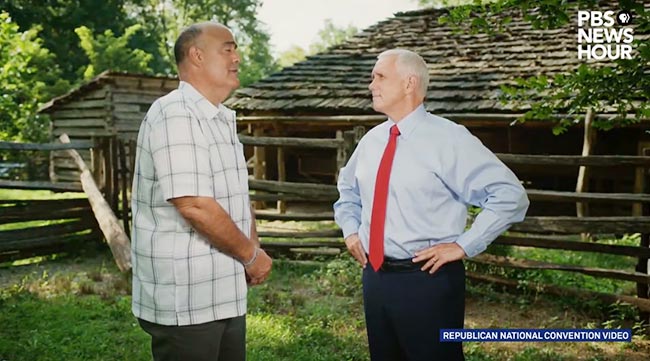 In the prerecorded video, Pence spoke with DiFabio and five other people outside former President Abraham Lincoln’s boyhood home in Indiana, extolling Trump’s performance during his first term in office. That included Trump’s handling of the General Motors Lordstown assembly plant.

“Geno is a truck driver from Ohio, who heard politicians for years make empty promises about defending American jobs only to see those promises broken again and again,” Pence said. “But in 2019, when GM closed its plant in Lordstown, Ohio, President Trump refused to stand by and watch it happen.”

The Lordstown plant’s closure has been a political sticking point for Trump over the past two years, and likely will be into November as Democratic presidential nominee Joe Biden plans to focus on an economic message in Ohio.

DiFabio, who works as a trucker at City Machine Technologies in Youngstown, has been regularly featured by both the Trump campaign and on news outlets as an example of the blue-collar voter who helped get Trump elected.

That includes appearances on Fox News and joining Trump on stage at the now-infamous 2017 rally in Youngstown where the president told attendees to not sell their homes because manufacturing work was coming back to the Mahoning Valley. The Lordstown plant closed permanently in 2019, becoming a rallying cry for Trump’s detractors who said he broke his promise.

In his portion of the RNC video, DiFabio said GM’s decision to sell the plant to electric truck startup Lordstown Motors wouldn’t have happened without Trump in office.

“There’s no other president that could have done it,” DiFabio said. “There’s no one that has even tried to do it. President Trump’s a doer. He appreciates every one of us, and I know he does. I’ve seen it.”

Lordstown’s mention in the video shows that even now it remains a politically volatile subject for Trump’s re-election. The Mahoning Valley is a politically significant region where Trump was able to perform much better than past Republicans in the traditionally Democratic, blue-collar area on his way to an 8-percentage point victory in the state in 2016.

Trump tweeted about the plant’s closure frequently, including attacking the union that represented workers at the plant during a 2019 appearance in Lima.

Pence visited the facility in June for the unveiling of its all-electric pickup truck prototype, saying Trump kept his promise to the workers of Lordstown. Lordstown Motors plans to hire 400 workers to assemble the truck at the factory, which used to employ 4,500.

DiFabio’s appearance discussing Lordstown comes just a week after Trump called for a boycott of another major Ohio employer, Goodyear Tire & Rubber Co. based in Akron. Democrats have criticized Trump for both Lordstown and Goodyear over the past week, saying he has broken his promises to protect Ohio jobs.