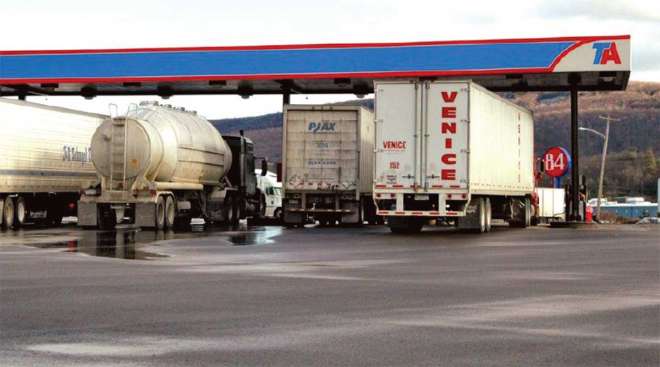 This story appears in the May 15 print edition of Transport Topics.

Fuel gross margin and fuel gross margin per gallon were lower in the quarter compared with the 2016 period, primarily due to the impact of recent lower demand and “reactive pricing strategies by our competitors and our reaction thereto,” the company said in its earnings report. The fuel gross margin dropped 6.7% year-over-year to $85,585.

As of March 31, TA’s business included 256 travel centers in 43 states and the province of Ontario. Of those, 178 locations operated under the TravelCenters of America brand and 78 operated under the Petro Stopping Centers brand.

Nonetheless, the New Albany, Ohio-based company’s truck-­related sales increased 13% sequentially compared with the 2016 fourth quarter. Accordingly, it updated its forecast for Class 8 North American 2017 build rates, saying they would finish the year between 215,000 to 235,000 units. That was up from its earlier guidance of 200,000 to 220,000.

The results reflected $153 million in special items, including a gain on the sale of Alcoa Corp. shares, somewhat offset by noncash charges related to the divestiture of a rolling mill in Fusina, Italy, the New York-based company said.

Revenue climbed 4.5% to $3.2 billion year-over-year, driven by higher volumes across all segments, the company said.

Net income fell 40% to $3.25 million, or 7 cents (originally stated as SEK 29 million), compared with $5.4 million, or 12 cents, in the 2016 period. The North American vehicle market, which accounts for 50% of net revenue, fell more slowly than a year earlier, the company said.

Revenue totaled $129 million, compared with $123 million in the same period of the previous year. After currency adjustments, net sales increased by 0.4%, Haldex said.

A bidding process for the sale of Haldex was initiated July 14, 2016, and is ongoing. Knorr-Bremse’s offer of $14 per share is conditional on regulatory approval.

Haldex is listed on Nasdaq Stockholm.

The company develops and sells brake and air suspension products for heavy vehicles. All of the major truck and trailer manufacturers in North America and Europe are customers, Haldex said.

In the quarter, Haldex launched its intelligent trailer module intended to expand the capability of trailer anti- lock brake systems to include faster communication and increased plug-and-play functionality.