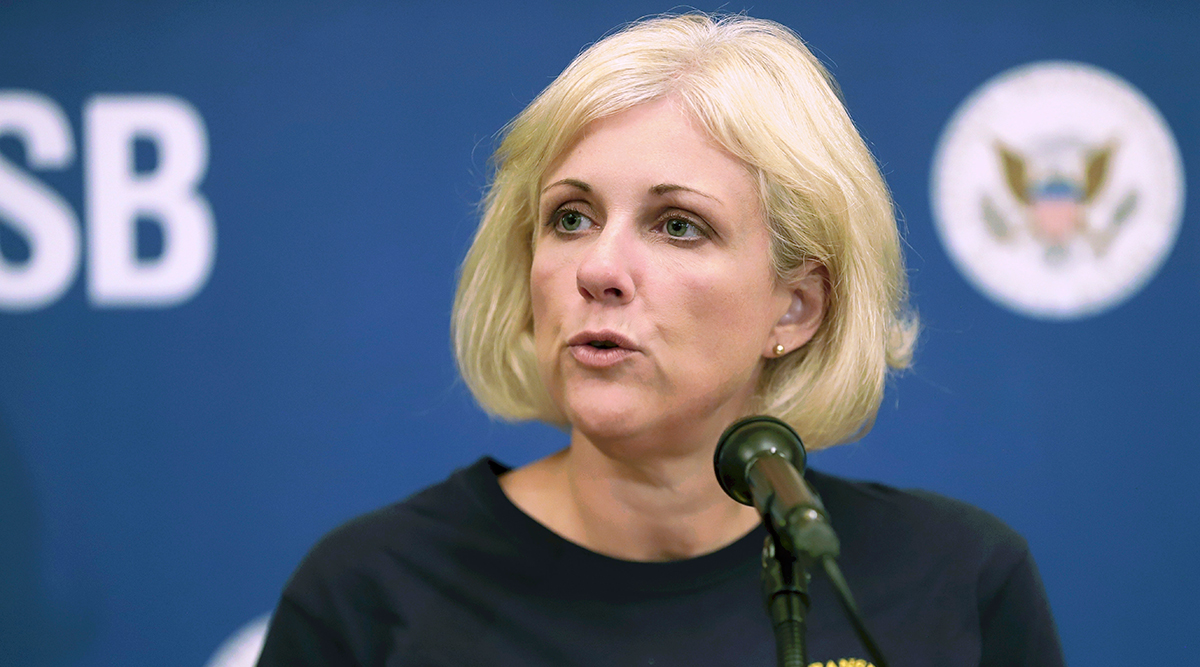 Jennifer Homendy of the National Transportation Safety Board at a 2019 news conference. (Chris Ehrmann/Associated Press)

WASHINGTON — With traffic fatalities spiking higher, the nation’s top safety investigator says a widely cited government statistic that 94% of serious crashes are solely due to driver error is misleading and that the Transportation Department should stop using it.

Jennifer Homendy, the chair of the National Transportation Safety Board, told the Associated Press Jan. 18 that she’s surprised the wording remains on the department’s website even as the Biden administration pledges to embark on a broader strategy to stave off crashes through better road design, auto safety features and other measures.

Auto safety advocates have been calling on the department for years to stop using the statistic, including requests by Homendy in recent months as well as a letter from auto safety groups to Transportation Secretary Pete Buttigieg last month. They call the figure an unacceptable “excuse” for surging crashes. In a section touting the safety potential of automated vehicles, the National Highway Transportation Safety Administration’s website states “94% of serious crashes are due to human error.”

“That has to change,” Homendy said of NHTSA’s continuing use of the statistic. “It’s dangerous.”

She said the public should be enraged that nearly 40,000 people are dying annually in traffic accidents and millions are injured, but rather sees it as “just a risk people take.”

“What’s happening is we have a culture that accepts it,” she said.

“At the same time it relieves everybody else of responsibility they have for improving safety, including DOT,” she added, referring to the Department of Transportation. “You can’t simultaneously say we’re focused on a safe system approach — making sure everybody who shares responsibility for road safety is taking action to eliminate fatalities and serious injuries — and have a 94% number out there, which is not accurate.”

Responding, NHTSA said it would update the wording on its website in the near future “to address that characterization of the data as well as provide additional information.” The department is slated to release next week a national strategy for steps to save lives on the roads.

The figure stems from a NHTSA memo put out in 2015 stating that “the critical reason, which is the last event in the crash causal chain, was assigned to the driver in 94% of the crashes.” However, the memo also included a caveat that a “critical reason” is “not intended to be interpreted as the cause of the crash” and pointed to other significant factors.

State transportation agencies and the department, then led by Secretary Elaine Chao, subsequently cast the memo as finding that 94% of serious crashes happened “due to human error,” often when promoting the development of automated vehicles.

Traffic fatalities have surged in recent years, particularly during the coronavirus pandemic. The number of U.S. traffic deaths in the first six months of 2021 hit 20,160, the highest first-half total since 2006. The number was 18.4% higher than the first half of 2020, prompting the administration to embark on a broader strategy.

Traffic deaths began to spike in 2019, and NHTSA blamed speeding and other reckless driving behavior for the increases. Before then, the number of fatalities had fallen for three straight years.

In a separate road map for safety released Jan. 18, Advocates for Highway and Auto Safety pointed to rising crashes among AVs and cited them as one of the greater threats on the road due to insufficient safety.

The administration has expressed a greater commitment to improving safety for all road users. President Joe Biden’s $1 trillion infrastructure law, for instance, broadly promotes a “safe system” approach urged by NTSB that is aimed at minimizing the impact of human mistakes and protecting people who walk and bike as well as drive.