This story appears in the March 13 print edition of Equipment & Maintenance Update, a supplement to Transport Topics.

As manager of technical development for TA and Petro travel centers, Homer Hogg sells a lot of coolant to fleets of all sizes. In 2010, he started seeing something strange: a white residue plugging coolant filters and coating cylinder liners.

“I was receiving calls on a regular basis, and pictures and all kinds of frightening-type scenarios from our technical support center,” he said. “I was getting pictures of coolant filters that were totally restricted from this white residue.” 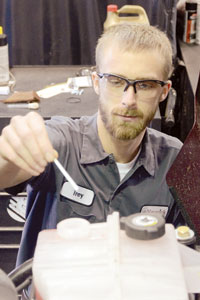 It’s because of that residue, and other issues with nitrite-based coolants, that nitrite-free coolants are projected to more than double as a percentage of the market by 2023. But not every fleet is making the switch yet — and some should not.

Coolants with nitrite organic acid technology react with the flux used to braze aluminum parts together. That reaction changes the coolant’s acidity, increasing metal corrosion and leading to undissolved solids and residue that plug filters, coat heat exchangers and cause scale on cylinder liners. This reaction can prevent heat from escaping and cause a localized heat spot, potentially leading to a fuel pre-ignition.

In response, coolant suppliers have produced coolants based on nitrite-free organic acid technology, or OAT, for Class 8 over-the-road technology.

David Turcotte, technical director at the Valvoline Co., said organic acids don’t deplete, and they protect metal surfaces well. Intervals for the nitrite-free OATs are six years, 600,000 miles or 12,000 hours — about the rebuild point for a motor, so ideally, a fleet won’t have to change the coolant at all. They are more expensive per container but require less maintenance, meaning there is less potential for problems when technicians overdose with additives, Turcotte said.

Fleets don’t have to test for nitrites or refill them, and the truck driver doesn’t have to be a chemist, Turcotte said.

Another plus is that non- nitrited coolant is backward-compatible but nitrited is not.

Not surprisingly, the share of the market controlled by non-nitrited coolants is growing.

Christa Bryant, marketing director of specialty categories at Valvoline, cited global market analyst Kline & Co. as saying that 20% of the market was nitrite-free in 2013, but that number is projected to grow to 43% by 2023. In Europe, manufacturers have used aluminum components in their heavy-duty trucks for a long time and have been using nitrite-free coolant accordingly.

Prestone’s Dilley said a good formula is stable enough that it prevents corrosion completely, so there is no degradation of the cooling system and there are no byproducts or rust. To produce those formulas, the coolant industry will need to keep up with truck and engine manufacturers.

A number of companies have come out with OATs that are the next step forward, “but there needs to be another step forward for the next generation of trucks,” Dilley said.

C.R. England Inc., which is based in Salt Lake City, completed the transition to nitrite-free coolants in 2015 at the recommendation of engine maker Detroit for its DD15 engines, said Douglas Kading, the carrier’s vice president of maintenance. The transition wasn’t difficult because the company was already using an extended life coolant with a small amount of nitrites, he said, adding the nitrites required a lot of maintenance and additives to maintain the proper concentrations.

Kading said he hasn’t seen a downside to the nitrite-free coolants. Costs for the coolant initially were a little higher, but they since have fallen.

Arkansas-based Maverick Transportation made the switch, even though it wasn’t having problems with its nitrite-based coolant. Brent Hilton, director of maintenance, said the company found it could save $247 per truck over 400,000 miles, for a total fleet savings of $395,000, because technicians didn’t have to add silicate coolant additive every 25,000 miles at a cost of $96 total per truck, and they didn’t have to replace coolant filters every 50,000 miles at a cost of $176 each. The only cost was $25 for converter fluid. The company was able to convert 1,600 trucks within three months, and now all trucks come factory-filled with nitrite- free coolant.

Miami-based Ryder System made the switch in September 2015. The company was experiencing problems with nitrites “in limited situations,” said Scott Perry, chief technology and procurement officer, but it was not having major issues.

Two years earlier, one of its manufacturers had approached the company about making the change, but Ryder hesitated because executives were unwilling to part with their trusted test strips used to test for metals protection and additives. Ryder had more than 150,000 affected power units and wasn’t willing to take a chance, Perry said. It took coolant manufacturers about 18 months to develop a test strip Ryder could use with confidence.

Perry said the company hasn’t cost out the difference between nitrite-based and nitrite-free coolants, but the nitrite-free is easier to manage. The company expects the factory fill to last the life of the truck with some replenishment. Reducing that responsibility was “a parallel benefit,” he said.

Mesilla Valley Transportation, of Las Cruces, New Mexico, never had to worry about nitrites because it changed to nitrite-free coolants in 2007, based on a recommendation by its engine manufacturer, said Emily Roof, marketing director. The switch involved no challenges and no major added costs.

However, not everyone is making the switch, said Robert Braswell, technical director of American Trucking Associations’ Technology & Maintenance Council. Many fleets are doing fine with their maintenance practices and see no need to change.

Nitrite remains an effective corrosion inhibitor when used properly and in the right applications, he said. For example, it’s often the best choice for off-highway use and mining where the heat exchangers are made of sturdier metals.

C.R. England, Maverick, Ryder and Mesilla Valley rank Nos. 23, 74, 13 and 66 respectively on the Transport Topics Top 100 list of the largest U.S. and Canadian for- hire carriers.

Heather DeBaun, a technical specialist working with engine oils and coolants, said the truck maker did use a nitrite-free coolant in its 13-liter engine for a time. But Navistar then returned to nitrite-containing coolants because its fleet customers were using it in their other tractors and wanted to stay consistent in all applications, DeBaun said.

Coolants with or without nitrites can be used as long as they meet Navistar’s recommended specifications.

Mack Trucks has offered nitrite-­free coolant as an option for at least 10 years, but its standard factory fill is a fully formulated coolant with conditioner. Scott Barraclough, technology product manager at Mack, said the manufacturer has not had any issues with nitrite-­containing coolants.

The other truck manufacturers, Volvo, Daimler and Paccar, didn’t respond to requests for comment.

Cummins’ engines do not leave the factory with the coolant prefilled, said spokesman Kevan Browne.

Valvoline’s Turcotte said fleets are reluctant to switch. The industry is headed in the direction of nitrite-free coolant, but not necessarily at a steady pace.

“They may be resistant to change for a while, and then all of a sudden, change everything over to the nitrite-free,” he said.

But TA/Petro’s Hogg believes the industry will switch because the nitrites inevitably will react with the aluminum components.

“You can’t get away from the science,” he said. “The nitrite is definitely going to negatively interact with the aluminum components, and you’re going to see that residue.”