Navistar to Staff Up at Ohio Plant 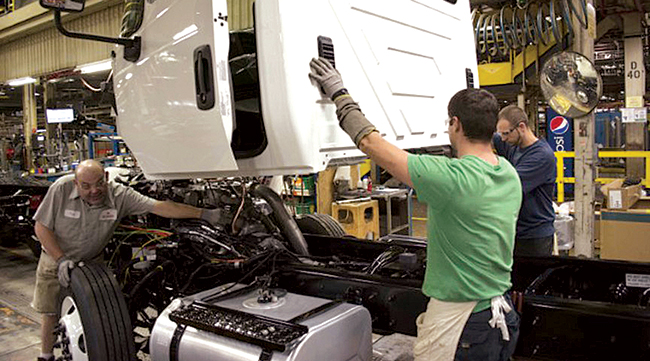 A cab on the assembly line at the Navistar plant in Springfield, Ohio. (Navistar)

Navistar is planning to hire up to 350 additional people at its Springfield, Ohio, assembly plant as it increases production this summer.

In addition to the new hires, the truck manufacturer will bring back employees who are currently on indefinite layoff.

Navistar’s Springfield plant builds medium-duty trucks on its main line as well as cutaway vans for General Motors on its other assembly line.

The production increase that was announced by local union representatives this month will impact the main line and production will go from 70 units per day to 115 units per day starting in July.

Navistar production workers and those in skilled trades are represented by UAW Local 402.

Representatives of Navistar did not share the exact number of new employees the company is hiring. However, a spokesperson with the company said that Navistar will hire additional employees to support its increase in production.

“The increase is due to our order board being up and (we are) adjusting our production schedules according to demand,” said Breana Whalen of Navistar.

“All previously laid-off employees will be given the opportunity to return to work. We are looking to hire additional employees to support the increased production,” she added.

The increase in units at Navistar’s Springfield plant follows a series of layoffs between 2019 and early 2020 as the plant reduced production on its main line.

More than 300 workers were placed on indefinite layoff status starting in 2019 as the company gradually scaled back truck production in Springfield from 117 per day to 70 per day to align with customer demand.

In August, at least 124 callback letters had been sent to workers who were previously laid off as the company began bringing them back to fill jobs that became open through attrition.

However, there were still 106 UAW Local 402 members on indefinite layoff as of earlier this month, according to a union bulletin.