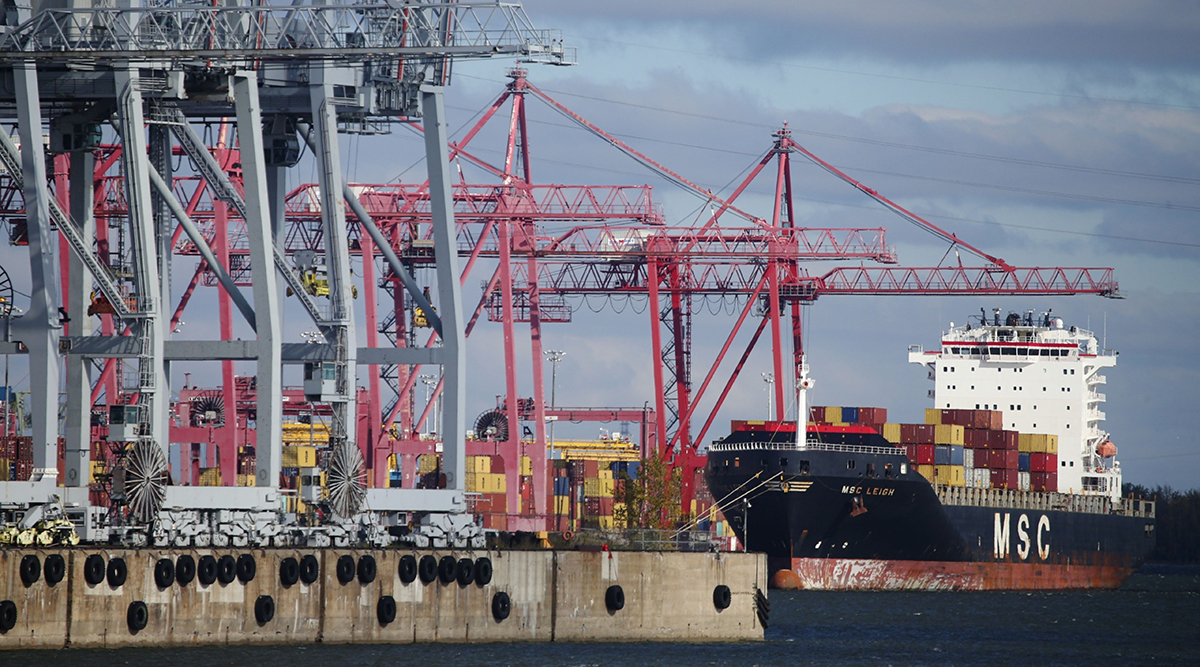 A containership sits docked at the Port of Montreal on Oct. 28, 2021. (Christinne Muschi/Bloomberg News)

The head of Canada’s second-biggest port has a supply chain sales pitch few of his peers in the global shipping industry can match: zero wait time at sea for container traffic.

Martin Imbleau, chief executive officer at the Montreal Port Authority, said the ability to dock and load efficiently there is luring new clients even though doing so requires traveling the length of the St. Lawrence River, 620 miles inland from the Atlantic Ocean.

“A longer route, in some cases, becomes preferable if it provides reliability,” Imbleau said in an interview.

Pent-up consumer demand after two years of supply chain disruptions has led to bottlenecks at major ports. Wait times at Montreal’s main competitor on North America’s east coast, the Port of New York and New Jersey, spiked to 4.75 days at the end of 2021, compared with an average of 1.6 days over the whole year.

Shipping patterns are changing as a result. For example, China now accounts for more than a quarter of all traffic in the Port of Montreal, compared with almost nothing five years ago, Imbleau said. Much of that new traffic enters the Atlantic Ocean through the Panama Canal, stopping in Montreal on the way to Europe.

The shipping and logistics industry is reorganizing itself as well. Imbleau said he expects to see consolidation as shipping providers, aware that they’re only as reliable as their weakest partner, try to take control of more steps in the supply chain. French giant CMA CGM SA’s purchase of an automotive freight firm this month is the latest example of that trend, Imbleau said.

Rising interest rates will increase borrowing costs for inventory and shipping activities, Imbleau said. That’s on top of the premium that manufacturers have been paying to move their goods during the pandemic. 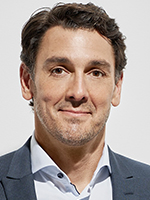 “Export and import prices are still very, very high,” Imbleau said. The cost of sending a container from Montreal to Asia has doubled since the start of the pandemic, he said, while the cost of bringing one in from the same region has roughly tripled.

Delays and disruptions are prompting manufacturers to keep more components on hand, a reversal of the just-in-time, lean-inventory model that broke down in the early months of the pandemic.

That means “buying stock not three weeks, not three months, but six months ahead of time and storing it somewhere,” Imbleau said, adding that he expects shipping lines and ports to consider adding warehouses or distribution centers to their facilities.

Financing can be more expensive for inventoried goods than for in-transit goods because of the risk that demand for the products might weaken while in storage. “Not all financial institutions like to finance inventories,” he said. “So the cash-flow management of some players could be a concern in the next year.”

In addition to China, Imbleau expects to see more traffic from Indonesia and India coming through his port. He also said BRP Inc., the recreational products spinoff of Montreal aerospace manufacturer Bombardier Inc., is doing increasing business with Vietnam.

Canada’s main gateway to Asia is on the Pacific Coast, in Vancouver. The Port of Vancouver handles more than three times as much container traffic as Montreal, and wait times there are running at more than a week. 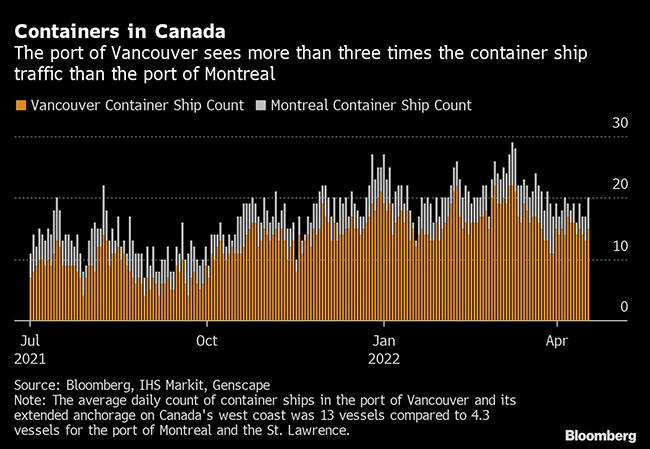 Of course, New York remains an irresistible destination for so much cargo. The Port of New York and New Jersey handled almost seven times as much container traffic in February as Montreal did, despite the long wait times.

“If you’re going to have a shipment and offload some cargo before you continue on to Europe, you want to maximize the potential consumers that you can also ship to,” Bessma Momani, a political economist and senior fellow at the Centre for International Governance Innovation in Waterloo, Ontario, said by phone. “You just can’t compare Canada’s nearly 40 million to the nearly 400 million in the United States.”

Still, Imbleau, a 49-year-old lawyer who joined the port as CEO at the start of 2021 after two decades as an energy industry executive, said: “We’re maybe a bit longer, but definitely reliable — and no waiting time whatsoever in the St. Lawrence River, at the port of Montreal. None. There are not too many ports that can say that.”