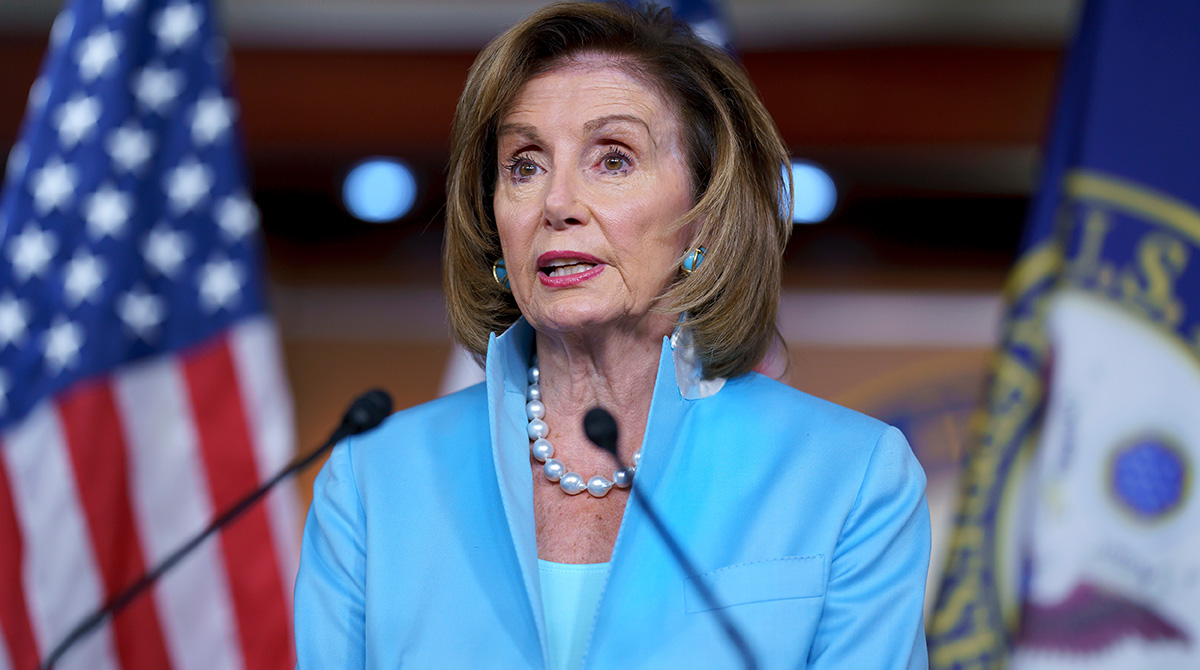 Speaker of the House Nancy Pelosi by J. Scott Applewhite/AP

The centrists’ threat directly defies House Speaker Nancy Pelosi’s announced plans, and she is showing no signs of backing down. It also completes a two-sided squeeze on the California Democrat, who has received similar pressure from her party’s progressives.

Democrats can only pass legislation in the narrowly divided House if they lose no more than three votes. Solid Republican opposition seems certain.

“We will not consider voting for a budget resolution until the bipartisan Infrastructure Investment and Jobs Act passes the House and is signed into law,” nine centrists wrote in a letter to Pelosi obtained Aug. 13 by the Associated Press.

Congressional passage of the budget resolution seems certain because without it, Senate Republicans would be able to use a filibuster, or procedural delays, to kill a follow-up $3.5 trillion measure bolstering social safety net and climate change programs. That measure, not expected until autumn, represents the heart of Biden’s domestic agenda.

Pelosi repeatedly has said the House will not vote on the $1 trillion package of road, rail, water and other infrastructure projects until the Senate sends the House the companion $3.5 trillion bill.

Pelosi has set that sequence because her party’s progressives have worried that if the infrastructure bill is approved first, moderates unhappy with the separate $3.5 trillion measure’s cost would feel free to vote against it, causing its defeat.

A senior House Democratic aide said the party doesn’t have enough votes to pass the infrastructure bill this month. The aide contrasted the nine moderates to the dozens of progressive Democrats who would vote against that measure unless it comes after the House gets the Senate’s $3.5 trillion social and environmental bill.

The aide was not authorized to publicly discuss the party’s internal dynamics and spoke on condition of anonymity.

“I am not freelancing. This is the consensus,” Pelosi told Democrats of her plans in a conference call this week, according to a person familiar with the private call who described it on condition of anonymity. The speaker added: “The votes in the House and Senate depend on us having both bills.”

We should not be holding up such a huge bipartisan win for @POTUS, for Northern New Jersey, and for our nation.

Leaders of the Congressional Progressive Caucus, which includes nearly 100 House Democrats, say many of their members have indicated they would vote against the infrastructure bill until the expansive $3.5 trillion legislation has cleared the Senate.

House Majority Leader Steny Hoyer (D-Md.) has announced that the House will return early from its summer recess, on Aug. 23, to vote on the budget and perhaps other legislation.

The letter was dated Aug. 13 and reported earlier by Punchbowl News, a publication that covers Capitol Hill, and The New York Times.

It was signed by Reps. Josh Gottheimer of New Jersey; Carolyn Bourdeaux of Georgia; Filemon Vela, Henry Cuellar and Vicente Gonzalez of Texas; Jared Golden of Maine; Ed Case of Hawaii; Jim Costa of California; and Kurt Schrader of Oregon.

The Senate approved the budget resolution early Aug. 10 over solid GOP opposition, hours after it approved the infrastructure bill with bipartisan support.