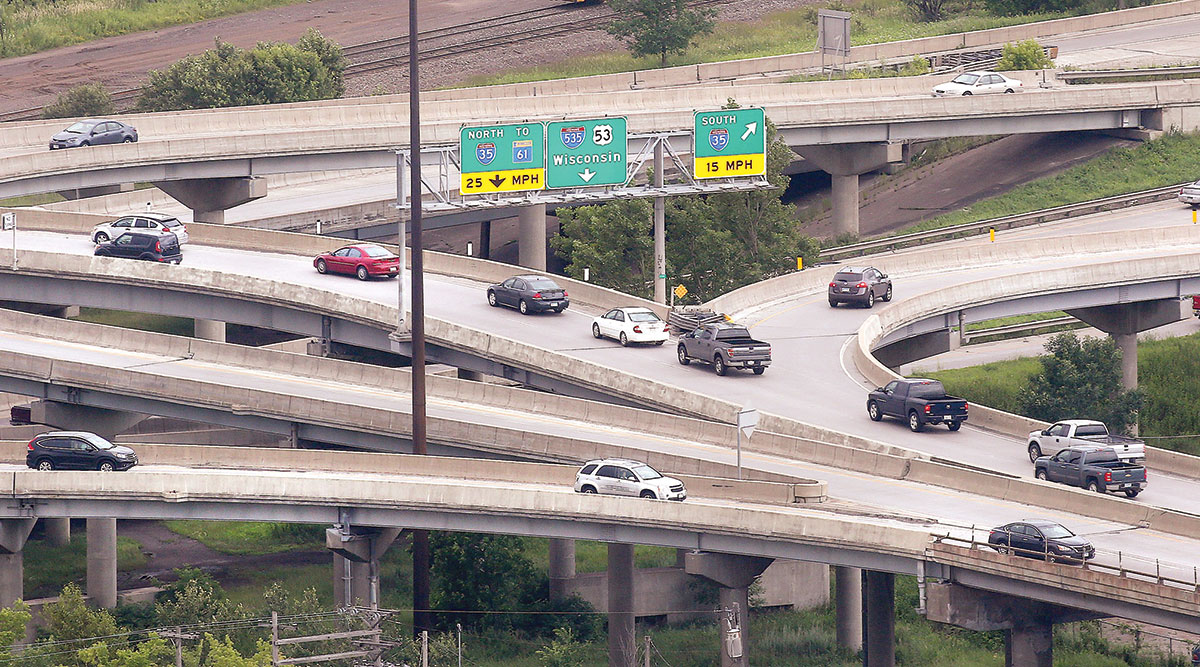 The Trump administration’s $1 trillion infrastructure promise is starting small — with a reboot — and shifting greater responsibility onto states and municipalities.

The U.S. Department of Transportation in Washington, D.C., is asking cities in rural America that have applied for federal bridge and highway funding to resubmit for projects, such as the Twin Ports Interchange, which are no longer eligible for funding under an Obama administration mechanism.

The locally impacted interchange is commonly known as the Interstate 35 “can of worms” — a series of twisting ramps and elevated freeway that runs through the Lincoln Park neighborhood of Duluth. The Minnesota Department of Transportation’s Duluth office is hoping that its estimated $205 million, phased reconstruction of the interchange will be a part of the next round of submissions, which are due by Nov. 2.

Duane Hill, the district engineer based in Duluth, said MnDOT leadership in St. Paul is likely going to approve projects for resubmission later this month. States submit up to three.

“They’ve supported this project pretty significantly so far,” Hill said, citing $5 million spent already on preliminary work and two prior grant applications, one failed and the one currently stalled.

The Twin Ports Interchange project is designed to make the stretch of I-35 safer, reduce bottlenecking that occurs on the busiest days and create greater capacity and ease of access for truck traffic and oversize loads coming into and out of the port.

MnDOT’s Duluth office had been awaiting word on a submission for funding last December from (what was) the FASTLANE grant program, which allowed by law for $800 million annually through 2019 to fund infrastructure projects in rural communities such as Duluth.

Under the Trump administration, FASTLANE has been reimagined as Infrastructure for Rebuilding America, or the INFRA program. It is making the final $1.5 billion worth of funding available at once for projects “in need of funding for highway and multimodal freight projects with national or regional economic significance,” said a July U.S. Department of Transportation news release announcing the grant program. The new program emphasizes leveraging state and local dollars for a smaller share of federal ones.

“The way I understand it is, 20% is actually federal funds,” Hill said. “The rest of it is local money.”

“The President and the Department are committed to revitalizing, repairing and rebuilding America’s aging infrastructure,” said Secretary Elaine Chao in the July news release. “By ensuring the right incentives, projects selected under this program will be better able to make significant, long-term improvements to America’s transportation infrastructure.”

Hill estimated an INFRA grant proposal for the Twin Ports Interchange would be for about $41 million. The rest would be scraped together locally, in a sourcing effort on a scale of which the MnDOT Duluth office is unfamiliar.

“The state legislature did us a favor last spring by providing MnDOT the (continued) ability to bond,” he said, referring to nearly $1 billion in bonding money made available through 2021.

If funded, Hill expects the project would be done in phases across four or five years, saying, “This is something that can’t be built all at once anyway without messing up traffic.”

Infrastructure Bill Could Pass Committee in May, Carper Says