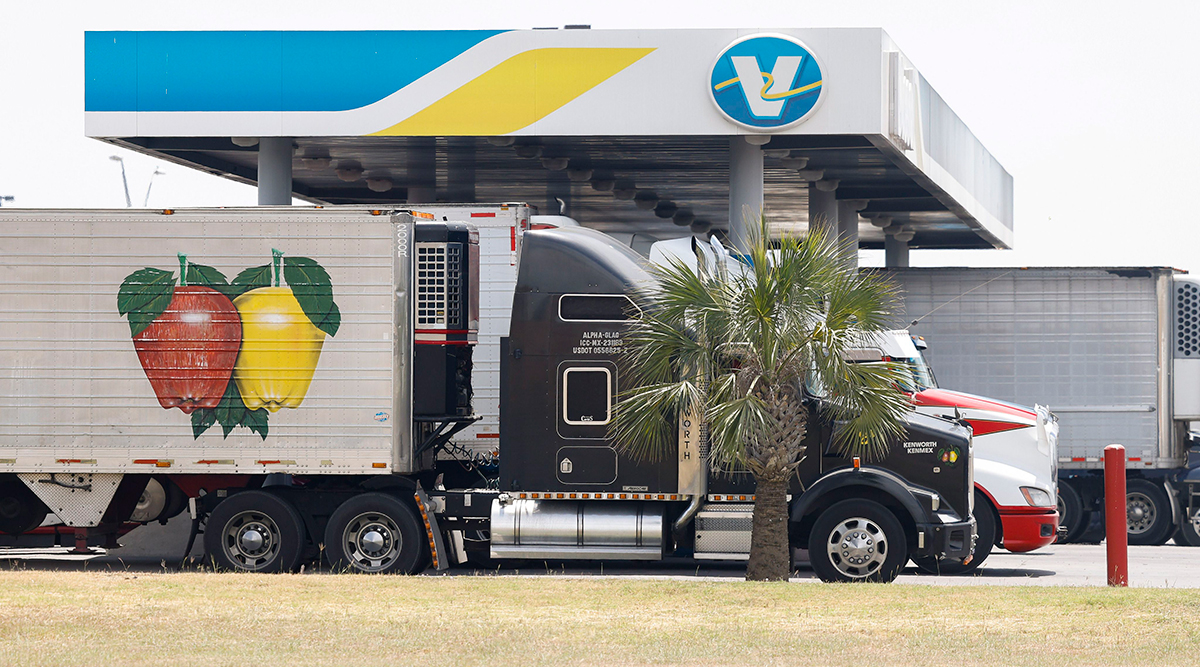 PHARR, Texas — Just four days after the Texas Department of Public Safety began implementing a program to inspect all commercial traffic crossing the Texas-Mexico border, Mexican truck drivers staged a protest that halted all traffic into and out of Mexico at the Pharr-Reynosa International Bridge on April 11.

The protest, run largely by independent Mexican owner-operator truckers on the Mexican side of the bridge, comes after the new inspection policy, mandated by Gov. Greg Abbott, led to dayslong delays for commercial vehicles at the third-largest land port of entry in the country.

With so much traffic passing across the bridge each day, some estimates say the traffic stoppage is costing upward of $100 million per day.

The Pharr bridge is also the largest importer of fresh produce along the southwest border, meaning many of the loads waiting to be crossed include tons of fruit, vegetables and meat that is beginning to rot as trailers run out of the precious diesel keeping their refrigerators running.

“The drivers have been sitting in line anywhere from 14, 16, up to 36 hours on the bridge or just outside the bridge in Mexico,” said Polo Chow, owner of trucking carriers in both the United States and Mexico, who also serves as an adviser to CANACAR, the National Chamber of Freight Transportation in Mexico. 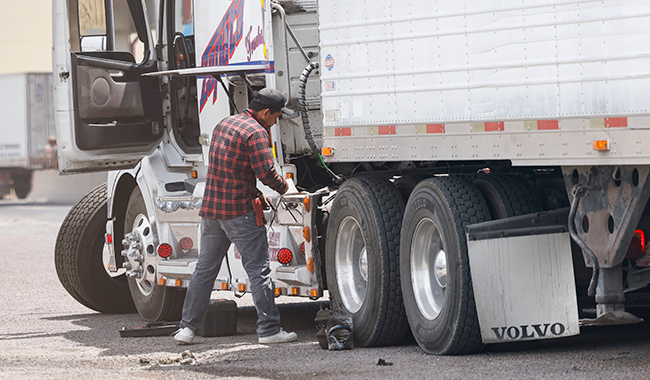 “The drivers — these are owner-operators that cross every day, they got together and they decided that what they’ve experienced on Thursday, Friday, Saturday and Sunday is totally inhumane because they were there on the bridge without water, without food, without access to restrooms,” Chow said.

Reached for comment April 11, officials with U.S. Customs and Border Patrol deferred comment to Mexican officials, but said some traffic is being rerouted to other ports of entry.

“Under established business protocols, northbound commercial traffic is diverted to neighboring ports of entry in the interim,” a CBP spokesperson said.

But traffic hasn’t just stalled coming into the United States. Truckers have also been unable to cross back into Mexico, despite assurances from the city of Pharr that the bridge remains open.

“The Pharr International Bridge is ready and open for business,” the city of Pharr said in a news statement April 11.

The border inspections by Texas are seen as redundant by at least two major trade groups that say the new policy is already wreaking havoc on the border. https://t.co/2KsiJBjczT — CNN (@CNN) April 12, 2022

“We are aware of the situation in Mexico that is currently preventing the flow of commerce into the United States. We will continue to closely monitor these unfolding events and work with the proper authorities as necessary,” the city further stated.

The following day, DPS began conducting the manual inspections beneath a canopy within line-of-sight of the bridge.

There, troopers have been inspecting every single truck that crosses the bridge — a process that takes anywhere from 40 minutes to an hour, Chow said.

That’s after the trucks have already passed through complex screening processes — including X-rays and other scans — from U.S. Customs and Border Protection, the U.S. Department of Agriculture (USDA) and U.S. Department of Transportation.

“To be honest with you, we don’t understand it, and I don’t think it’s serving any purpose,” Chow said of Abbott’s enhanced inspections.

But instead of finding contraband, DPS has been citing drivers for minor infractions, like broken taillights.

All commercial traffic both into and out of Mexico has been halted at the Pharr-Reynosa International Bridge — the third busiest land port of entry in the country — due to @GovAbbott’s declaration that trucks be inspected by DPS after crossing & passing thru CBP inspections. pic.twitter.com/Ks9R71ht90 — Dina Arévalo (@PhotogDina) April 11, 2022

“They feel very offended by the way they’re being treated,” Chow said of the protesters.

The halt of all commerce at the Rio Grande Valley’s busiest port of entry will have consequences far beyond the four-county area.

Chow said a survey of Mexican manufacturing plants to gauge the economic impact of the shutdown is underway.

Of 152 plants just across the border, about 100 have responded. The result so far? The shutdown is costing some $114 million in commerce per day, or about $9 million per hour, Chow said.

And it’s not just affecting Mexican truckers. U.S. carriers and manufacturing plants are suffering, too.

Not only are avocados going bad on the bridge, but a Toyota truck factory in San Antonio has been unable to receive shipments of auto parts that are manufactured in Mexico, such as side mirrors, Chow said.