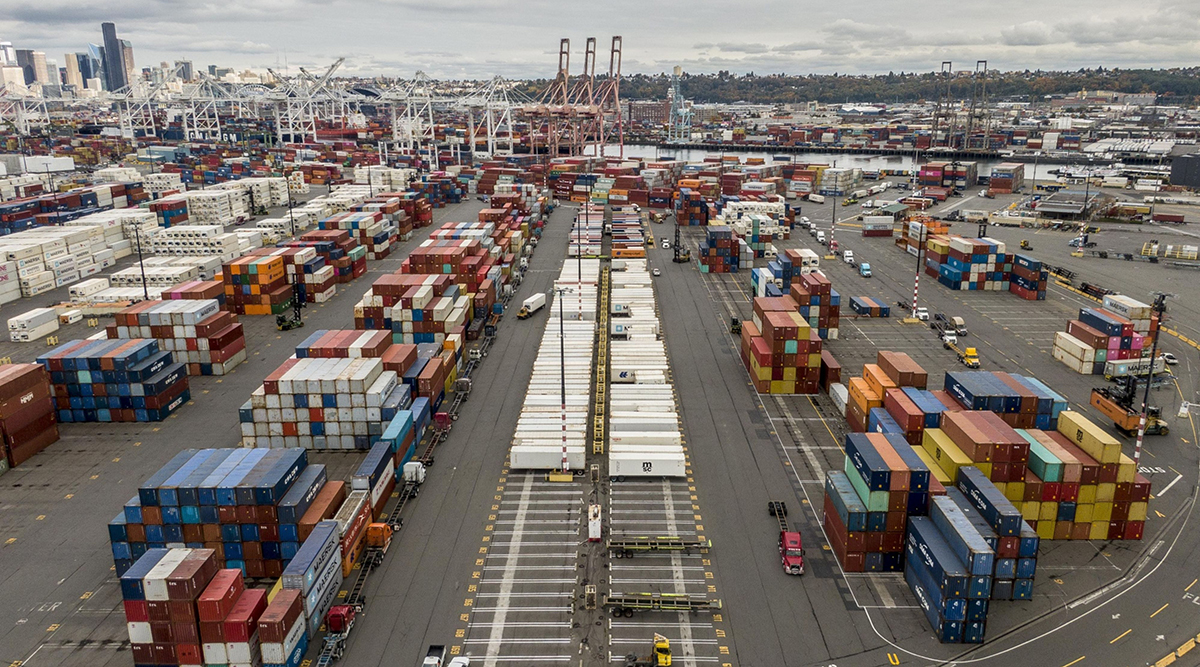 The Port of Seattle in Seattle, Wash. (David Ryder/Bloomberg News)

The world’s largest container carrier disagrees with another party over how to proceed on a key issue in ongoing contract talks with the union representing 22,000 dockworkers at U.S. West Coast ports.

Mediterranean Shipping Co. filed a motion in late October with the National Labor Relations Board urging SSA Marine Inc. to assign tasks at the Port of Seattle’s Terminal 5 to the International Longshore and Warehouse Union, according to documents obtained by Bloomberg News under a Freedom of Information Act request.

A different union at Seattle’s port, the International Association of Machinists and Aerospace Workers, has claimed it’s responsible for those tasks — which encompass connecting moored vessels to shore-based electricity while docked in a process known as “cold ironing.”

The MSC accuses the machinists’ union of threatening “economic action” against SSA, which operates the largest terminal at Seattle, if it allows the ILWU to do the work, according to the filing.

“That threat directly implicates MSC, because it is MSC’s vessels that call T5 and would be at the center of this dispute,” the Geneva, Switzerland-based carrier said.

The dispute in Seattle is among the main reasons that contract negotiations for all West Coast dockworkers have dragged on for months, and the filing is noteworthy because it lays out what’s at stake for MSC.

Millions of dollars are spent to fit ships with the equipment needed to supply electricity from shore rather than use power from their engines.

The ILWU and the Pacific Maritime Association — which acts as a broker for more than 70 companies, including SSA and MSC — have been negotiating a new contract for dockworkers across California, Oregon and Washington since May 10. The ILWU has been working without a contract since their previous pact expired July 1.

The ILWU and the PMA declined to comment when asked about the filing. SSA and MSC didn’t respond to requests for comment.

The parties have repeatedly vowed to avert disruptions and shipping delays similar to those that plagued the last contract talks and only ended after the Obama administration intervened nine months later in 2015.

But jurisdiction, which refers to what sort of jobs the union’s members get to perform at the ports, has been among the main sticking points in the current talks — and some still see no resolution in sight.

After sending SSA a letter in September, MSC’s Oct. 25 filing asks the labor board to grant its motion to intervene so it can express its preference that the ILWU perform the cold ironing work.

“MSC is the only carrier with vessels calling T5 — a possible economic action at Terminal 5 would, then, directly harm MSC’s business interests,” the shipping line said in the filing.

In September, the ILWU accused the SSA of violating “the very provision of the contract over which the parties were bargaining.”

Mediterranean Shipping Co. is ranked No. 5 on the Transport Topics Top 50 list of the largest global carriers.