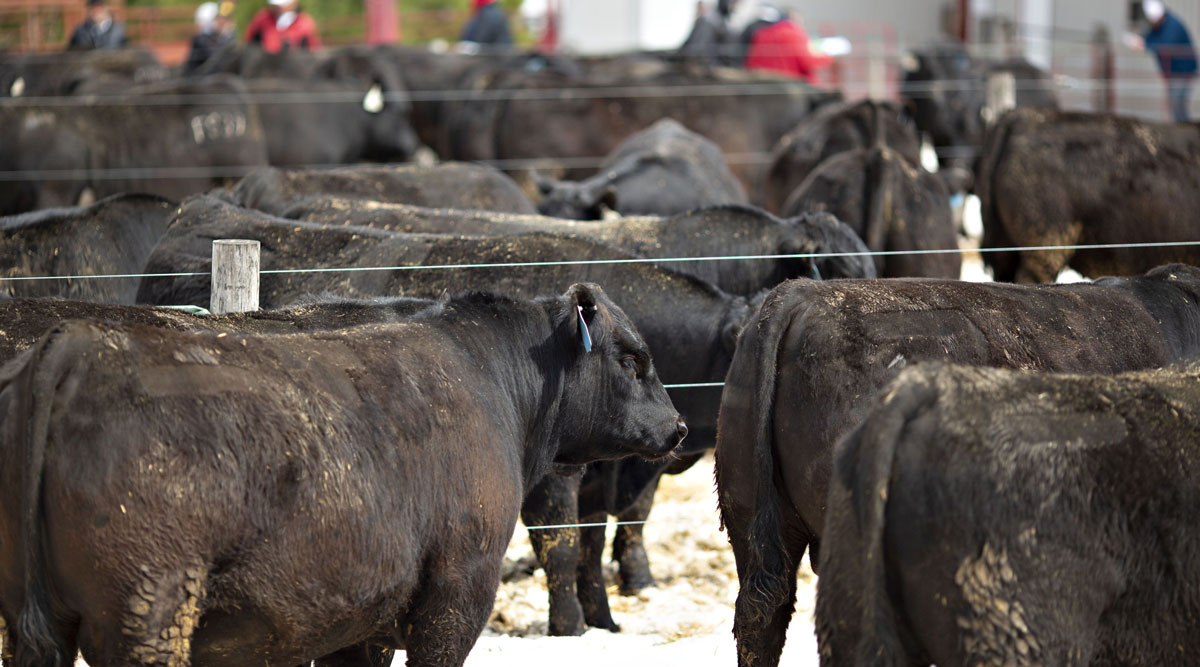 Angus bulls stand in pens prior to an auction in Wisconsin in April 2019. (Daniel Acker/Bloomberg News)

When coronavirus outbreaks forced shutdowns at America’s giant meat plants, it quickly created a bottleneck: Farmers had nowhere to sell their animals, while consumers faced shortages and surging prices. New, smaller slaughterhouses could be the antidote to industry concentration, but it’s no quick fix.

Opening a slaughterhouse has plenty of hurdles. The facilities — where animals are killed, butchered and meat is packaged into consumer-friendly cuts — aren’t always welcomed by locals. And there can be other challenges to finding the right location.

There needs to be enough livestock produced nearby and easy access to trucking routes, said Jeremy Robinson, who in March opened one of the country’s newest beef plants in Lone Jack, Mo. He also had a hard time finding workers in an area where few had prior experience.

“Training was intense,” he said. 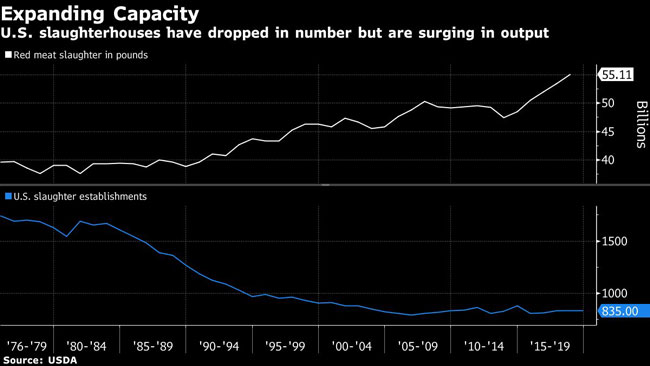 Then there are local, state and federal regulatory requirements for zoning and building. Even buying a defunct plant with a plan to revive it comes with a set of headaches. Old slaughterhouses have usually been out of commission for years, so updated permits are required. And the building has to be refurbished and outfitted with new equipment.

“In a normal market, starting a plant for 300 to 400 cattle a day, you need to be able to lose $4 million to get to profitability,” he said.

The pandemic laid bare how America’s system of churning out cheap meat is vulnerable to failure. COVID-19 outbreaks sickened thousands of workers, while plant shutdowns left grocery store shelves empty. Federal regulators and legislators have opened up probes to investigate industry concentration. But it remains to be seen how quickly the supply chain can change — and whether consumers are willing to pay more for protein that’s produced under smaller economies of scale.

The meat sector is dominated by a handful of titans — Tyson Foods Inc. and its top two rivals, JBS SA and Cargill Inc., control about two-thirds of America’s beef. The picture is similar for pork and poultry.

Tyson and JBS USA rank No. 11 and No. 63, respectively, on the Transport Topics Top 100 list of the largest private carriers in North America. 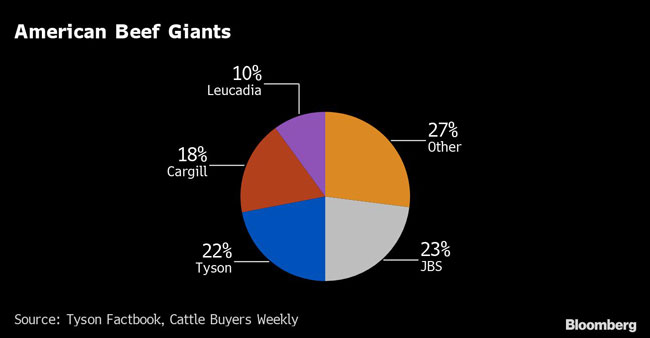 Most meat is produced in large, federally inspected plants. In January, there were 835 of those facilities, down 52% from 1,741 in 1976, according to the U.S. Department of Agriculture. Meanwhile, red meat production surged almost 40% in that period to 55.1 billion pounds.

The drop in facilities doesn’t tell the whole story because just a handful of plants today make up the bulk of production. In 2019, the 12 largest plants accounted for 52% of the total cattle slaughter.

The industry makeup not only can hit a huge chunk of supply when even one plant is down, but also leaves farmers with few options for selling their animals, which critics say gives the processing companies too much power over prices.

“We don’t have this robust infrastructure of small, mid-sized processing in this country,” said Ben Lilliston, interim co-executive director of Institute for Agriculture and Trade Policy. “It’s been wiped out.”

While the biggest U.S. cattle plants can process more than 5,000 animals a day, Robinson of Republic Foods says the sweet spot is closer to 500 to 1,000 head. That would ensure a fair market for local farmers, a plant workforce that’s not overloaded and that nearby restaurants and grocers get fresh meat, he said.

Congress is considering amending the Federal Meat Inspection Act and Poultry Products Inspection Act to make it easier for smaller processors to sell their products. At the same time, Democratic Sens. Cory Booker and Elizabeth Warren have opened a probe into meatpacker price manipulation. Meanwhile, the Justice Department has brought criminal charges in the poultry industry just as it opened a formal probe of beef companies. 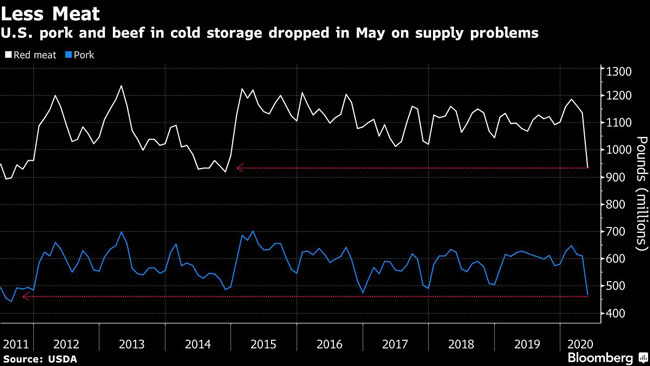 Breaking up the big companies would result in more plants, more investment and more slaughterhouses, and in turn, make the industry less susceptible to widespread disruptions, said Christopher Leonard, author of the “The Meat Racket.” But it doesn’t need to be a choice between the “monopolistic industry” that exists today and a “Utopian idea of small, local farming and backyard chickens,” he said.

History could be a guide to the change that’s needed now. A century ago, the U.S. sought to break apart a group of meat companies that dominated output, paving the way for more competition and laying the groundwork for the modern industry that lasted until rapid consolidation in the late 1980s.

“These monopolistic companies that have a stranglehold over the industry right now are telling us change is impossible, but the industry underwent really radical transformation over the last couple of decades and it was just driven by a business plan and a strategy to boost profit at a handful of companies,” Leonard said.

It takes about two years of construction and an initial investment of at least $2.5 million to get a new slaughterhouse up and running, plus the patience of dealing with government regulations and inspections, said Joshua Applestone, owner of Applestone Meat Co. in New York’s Hudson Valley.

“There’s not enough people willing to take on the responsibility to do it,” Applestone said.

Smaller slaughterhouses can be better for workers. Since they handle fewer animals per day, processing lines can run at slower speeds, helping to eliminate some of the most dangerous aspects of the job. Slower lines also allow for more social distancing. While some of the country’s bigger meat plants saw infection rates topping 50% for employees, not a single worker at Robinson’s Missouri plant has fallen ill so far.

There are questions over whether Americans will be willing to pay more for meat, since scaling down processing will almost certainly result in higher costs.

Large plants can typically operate for $100 less per head than smaller operators, and those costs are taken out of farmer profits, said Stephen Koontz, a professor at Colorado State University College of Agricultural Sciences who has studied the economics of packing plants. If farmers are paid less, they typically shrink the size of their herds which results in higher meat prices for consumers, he said.

The idea of having more smaller, regional processing plants doesn’t make as much sense economically as the current facilities, which were built to maximize efficiency and economies of scale, said Mark Dopp, general counsel and senior vice president of regulatory and scientific affairs for the North American Meat Institute, which represents companies that process the bulk of red meat and turkey products in the U.S., including Cargill and JBS.

COVID-19 has changed the rules of business, disrupted supply chains and created market volatility. Host Seth Clevenger revisits interviews with a broad range of industry experts and their evolving response to the pandemic. Hear a snippet, above, and get the full program by going to RoadSigns.TTnews.com.

And the meat giants seem to have proven they can recover quickly from crisis. After 30% to 40% of slaughter capacity was wiped out in April and May, processing has bounced back. Cattle and hog operations are back to about 98% of where they were this time last year, U.S. government data show.

Still, some farmers are facing a huge backlog of animals and they’re eager to find new plants where the livestock can get processed.

For cattle buyer Kim Ulmer, that has presented an unexpected opportunity.

He didn’t know anything about beef processing but wanted another option for farmers. So Ulmer got a group of 14 investors together, lined up the Dakota Prairie Bank and South Dakota Governor’s Office of Economic Development to bring an old plant in Fort Pierre, South Dakota back to life. They’re hoping for a grand opening July 1.

Ulmer’s phone hasn’t stopped ringing from retailers and restaurants, as well as other would-be slaughterhouse operators who heard about the new operation and want to replicate it.

“We’re trying to create a duplicable system,” he said, adding that he hasn’t even advertised the new plant beyond creating a website. “They’re tracking us down by word of mouth.”

Jen Skerritt, Deena Shanker and Michael Hirtzer were the primary contributors to this report.